Chinese leader makes the call during a visit by German Chancellor Olaf Scholz.

Chinese leader Xi Jinping made his most direct criticism yet of Vladimir Putin’s war on Ukraine on Friday, warning the Russian president not to resort to nuclear weapons and calling on visiting German Chancellor Olaf Scholz to push for peace talks.

Xi’s warning comes just over a month after Putin threatened Ukraine with a nuclear attack, a sign of how far Ukrainian forces had rocked the Kremlin with their advances against invaders in the East.

The international community, said Xi, should “jointly oppose the use of, or threats to use, nuclear weapons,” according to a statement carried by Xinhua, China’s state news agency. The world should also “advocate that nuclear weapons cannot be used, a nuclear war cannot be waged, in order to prevent a nuclear crisis” in Europe or Asia, Xi added.

The Chinese leader, who just weeks ago secured a norm-breaking third term in office, asked Germany and Europe to “play an important part in calling for peace and facilitating negotiations.”

Xi also called for “improving the humanitarian situation” in the crisis areas especially during the winter.

Still, the Chinese leader, who before the war referred to Putin as his best friend, notably stopped short of asking Russia to withdraw, a key demand for Ukraine and its Western backers. He also made no mention of Putin’s refusal to honor the U.N. agreement on facilitating Ukrainian grain exports, with his premier instead advocating the export of Chinese grain to help ease the food crisis.

In September Putin publicly acknowledged for the first time that Xi had “questions” and “concerns” about the war. Shortly after that meeting between the Chinese and Russian leaders, Putin upped the ante and raised the notion that nuclear weapons could be used. “To defend Russia and our people, we doubtlessly will use all weapons resources at our disposal,” Putin said. “This is not a bluff.”

“We cannot afford any further escalation,” China’s outgoing Premier Li Keqiang said at a press conference. Referring to Scholz who was standing next to him, Li said: “Both of us … hope the crisis ends soon.”

Xi’s show of opposition to Putin’s nuclear threats was hailed as a major diplomatic victory by Scholz, who has faced weeks of criticism for leaning too closely toward Beijing.

“We have agreed that threatening nuclear attacks is irresponsible and dangerous,” Scholz told reporters, referring to his meeting with Xi. “I have told President Xi the importance for China to exert its influence on Russia.”

Scholz brought with him a delegation of big businesses and also recently approved a deal by a Chinese state-owned company to acquire part of a terminal in the strategically important port of Hamburg. 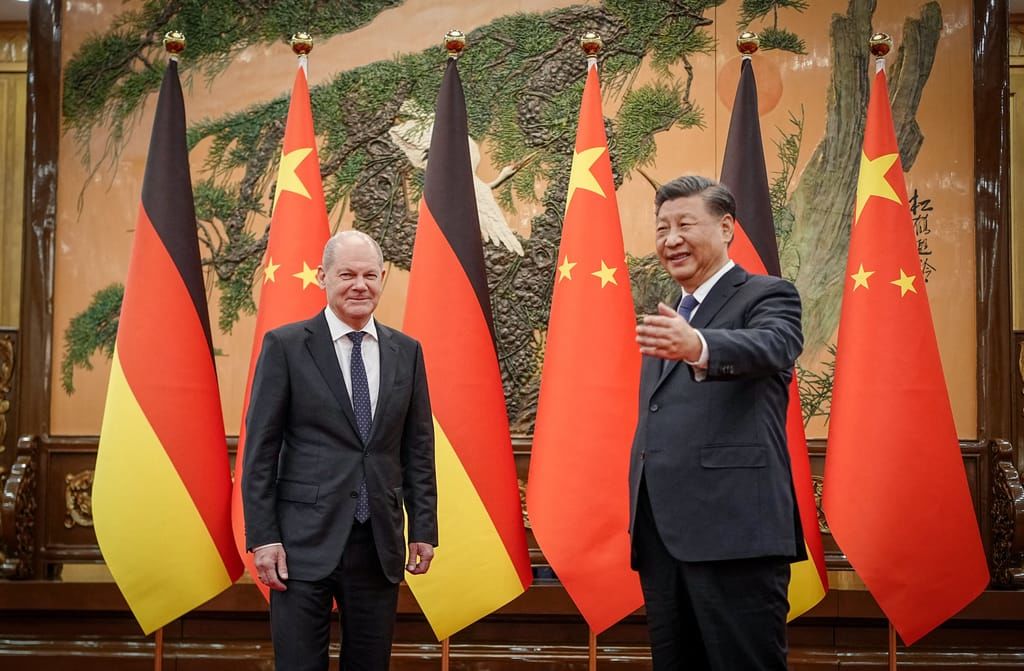 Indeed, during the opening remarks at his meeting with Xi, Scholz again recalled his earlier career as the Hamburg mayor, while urging Xi to deepen trade ties with Germany, the EU’s biggest economy.

Before the press conference drew to a close without a single question from reporters, Scholz brought up the escalating tension across the Taiwan Strait.

“Any change to the status quo of Taiwan can only take place through mutual agreement and peacefully,” he said, adding that he also raised the issue of the human rights abuses against China’s Muslim minority in Xinjiang.

Scholz alluded to Beijing’s economic coercion against Lithuania when the Baltic country pursued closer ties with Taiwan, saying: “It is also important to be clear: Economic measures against individual EU member states are directed against the entire EU internal market, and sanctions against EU parliamentarians are also unacceptable to us.”

While Scholz didn’t play up the trade focus of his trip, his Chinese host made sure to send a clear message to German businesses, which China considers to be a major source of stability in otherwise shaky EU-China relations.

“We continue to be prepared to assist Germany in accessing our market,” Premier Li told reporters at the press conference, calling for a “sound and stable” relationship with Germany. “We support a multipolar world, free trade, and want to meet our partner on an equal footing.”