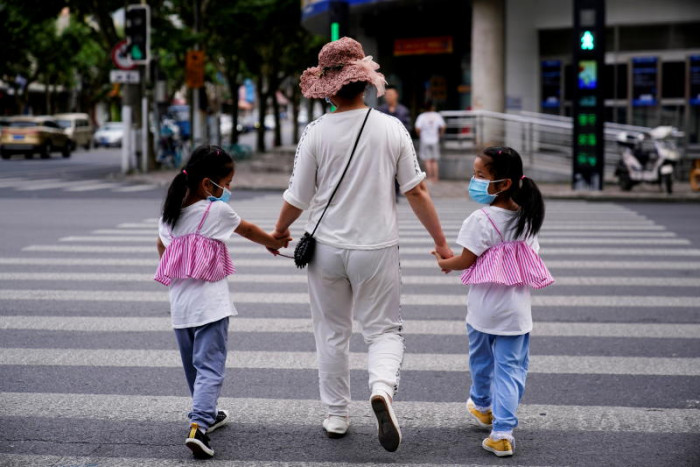 China's population could halve within next 45 years, new study warns

China's population decline may be much faster than expected, with the number of people in the country halving within the next 45 years, a new study has warned.

The projection was based on the official birth rate of 1.3 children per woman last year - well below the figure of 2 needed to keep the number stable - and forecast a much more dramatic decline than previous estimates.

China's current population is over 1.4 billion and in 2019 the United Nations projected that China would still have around 1.3 billion people by 2065.

Another estimate published in The Lancet by researchers with the University of Washington last year suggested the Chinese population would halve by 2100.

But the new research, from Jiang Quanbao and colleagues with the institute for population and development studies at Xian Jiaotong University, warned that the country's population decline may have been severely underestimated.

The UN's projection, for instance, was based on the assumption that China's fertility rate would remain at above 1.7 children per woman. China had 12 million newborns last year, 25% lower than the UN's estimate.

The Chinese authorities "need to pay close attention to the potential negative inertia of population growth and make a plan with countermeasures in advance," wrote Jiang in the study published in the Journal of Xian University of Finance and Economics.

The new birth rate, though unexpectedly low, was based on data from the latest census, which is believed to be the most accurate yet because it was collected entirely with the aid of digital devices for the first time and cross-checked with other government data sets.

Though the census findings have only partially been disclosed to the public, the limited information already shed a new light on changes and future development trends in the Chinese population, according to the researchers.

The pandemic may have had an impact on childbirth last year - but Jiang and his colleagues said the chances that the birth rate would rebound were low. They said it was more likely that the total population would soon start a rapid decline due to the drop in the number of women of child-bearing age.

"If the fertility rate drops to 1, in 29 years the population in our country will fall by half," they said.

According to the new census data, children make up about 17% of the population, while the proportion of over-60s rose to over 18%.

The researchers said it was the first time that China had more seniors than young people.

"People dare not to have children due to increasing economic pressure," they wrote. "There are also severe shortages in supporting services for childbearing and care."

While the government has loosened its population policy earlier this year, allowing all families to have three children, numerous studies have pointed out that economic factors such as high property prices are a major force driving down the birth rate.

In some countries such as the United States, rising property prices can help raise the birth rate because they make people wealthier, but in China the opposite applies.

A study published this month by the Chinese Academy of Sciences found that in the Yangtze River Delta, one of the most developed regions in the country, rapidly increasing housing prices have caused the area to have one of the lowest birth rates in the country.

Another study in August suggested that in China, each 1,000 yuan (5,200 baht) per square metre increase in property prices reduces the likelihood of having one child by 2%, and that of having two children by 5%.

The Chinese government has recently launched a series of campaigns to control property prices, reduce the cost of education and increase the number of kindergartens, but the study said further measures are needed.

Chen Gong, director of the Peking University Institute of Population Research, forecast in a recent article on the website of the National Bureau of Statistics that the Chinese population would start to decline from 2025.

He said that while the shrinking, ageing population would increase the burden on the social welfare system there was some good news.

For example, the number of citizen with higher education qualifications had nearly doubled over the past decade and now stood at 15% of population - something that Chen said could boost the country's development.

"It is expected that the quality of the Chinese population will increase rapidly and become a driving force for high quality economic development," Chen said. "It will also reduce pressure on natural resources and the environment."
Add Comment