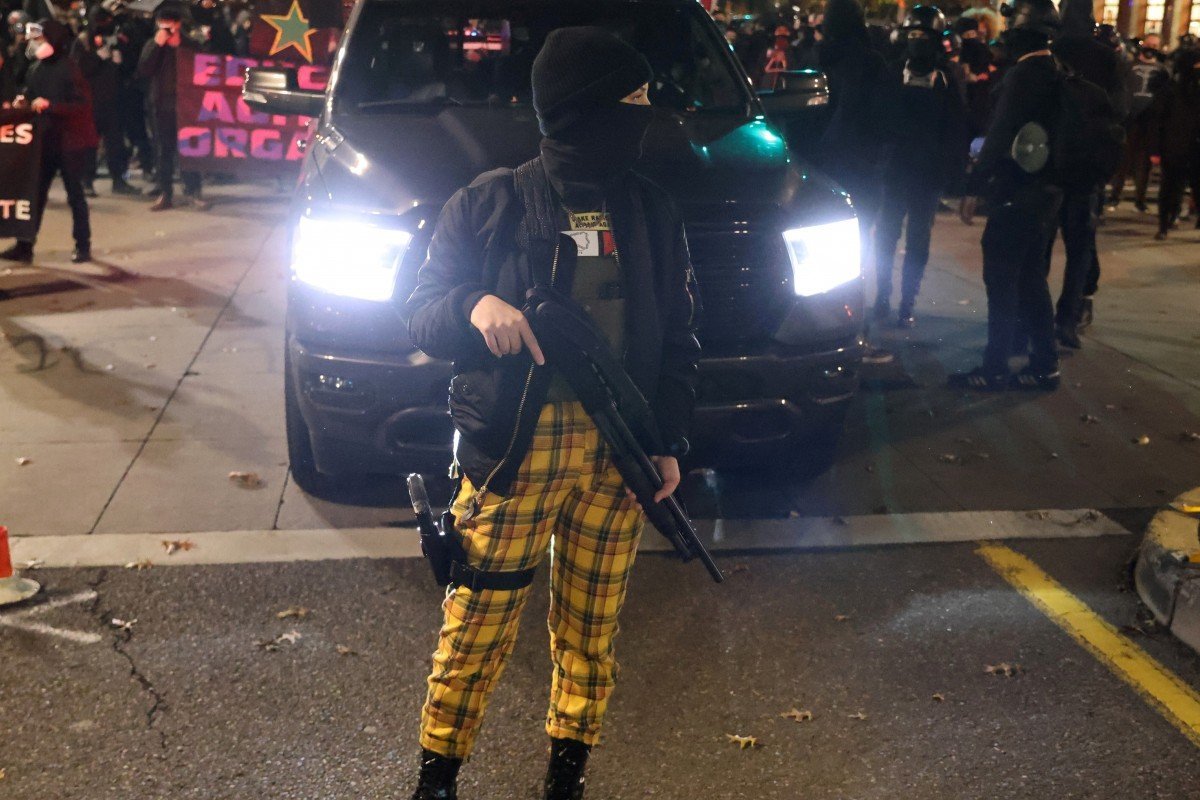 Focus has been on conflict and controversy, including footage on CCTV of Trump supporters trying to break into a polling station.

While Beijing has tiptoed around the subject of the US election and the ongoing vote count, some Chinese observers and state media have not been shy about speaking their minds.

On China’s heavily censored internet, much attention has been given to possible chaos in US society after President Donald Trump threatened to ask the Supreme Court to stop vote counting in states where Democratic contender Joe Biden could gain an edge.

In a video post, Shen Yi, an international politics professor at Fudan University, said the US had changed so much that its founding fathers would be disappointed.

“The founding fathers of the United States certainly did not hope the US would end up as it is today when they set up the system,” said Shen in the video posted on nationalistic media outlet guancha.cn.

“Is there anything wrong with the operation of the system?” he asked. “Can we just blame Trump or a few politicians for that?”

Shen’s remarks reflect much of the online discussion in China on the 2020 presidential race. Coverage of the election has been limited in Chinese media, but it has focused heavily on conflict and distress in American society, especially in state media reports.

On Thursday, as votes were still being counted in key battleground states including Pennsylvania and Georgia, state broadcaster CCTV reported that there had been a surge on election day in the number of Americans searching the internet for information on how to emigrate to Canada.

Citing data from Google trends, the broadcaster reported that searches for “move to Canada” had risen 700 per cent on November 3 because of concerns about racism and political polarisation.

Later in the day, CCTV aired footage of attempts by Trump supporters to break into a polling station in Detroit, a Democratic stronghold in the battleground state of Michigan which Biden won. They were heard chanting “stop the count, stop the count” in the footage. A caption on the screen read: “Multiple spots in the US have fallen into chaos.”

Meanwhile, a commentary published by state-run Shanghai newspaper Xinmin Evening News said the election results would not be known for a while, and the wrangling had only just begun.

“There will be huge controversy around the large number of mail-in votes. The election has sown the seeds of conflict in American politics and society,” it said.

Dramatic episodes in the US election have also gained traction on Weibo, China’s version of Twitter.

That includes searches for the Trump campaign team requesting a recount of votes in Wisconsin, a swing state Biden successfully flipped, narrowing Trump’s path to re-election. The hashtag had racked up more than 1 billion views by Thursday night.

Also among the trending topics was the Trump campaign lawsuit to stop vote counting in Pennsylvania, another swing state where Trump may lose his lead as more mail-in ballots are counted.

On social media, comments have been polarised and echo partisan debates in the US, with people divided over who to support and whether Chinese should even be following a US election.

“A lot of smart, educated people around me have split into two camps [for Trump or Biden],” one Weibo user wrote. “They each see the other side as senseless in supporting the other candidate.”

A significant number of comments have ridiculed election dramas.

“News about the US election should be placed under entertainment,” another Weibo user commented, using the hashtag for Trump’s lawsuit in Pennsylvania.

But for pro-democracy academics such as Xu Zhangrun, a former professor at Tsinghua University and a vocal critic of Beijing, the election is a strong sign of an open society.

“It’s a reality show on democracy and a modern way of political life. It’s both enlightening and educational for people in our country,” Xu told the South China Morning Post.

“Behind partisanship lies the different ideas to govern, but it’s done through a fair and open competition and an invitation for the people to participate.”