Kwasi Kwarteng is expected to outline next week a series of measures, including tax cuts, aimed at boosting the UK economy in line with the PM's Tory leadership campaign assertion that recession is not inevitable.

Chancellor Kwasi Kwarteng is considering a plan to scrap caps on bankers' bonuses as part of a post-Brexit bid to boost the City's competitiveness and the UK economy, Sky News understands.

He argues the cap, which was introduced under EU rules in 2014 following the 2008 financial crisis and subsequent eurozone debt crisis, would make London a more attractive destination for top global talent.

The measure, first reported by the Financial Times, was always opposed by the UK on the grounds that it would damage London's standing as a global financial hub.

But the idea of ditching the cap was dropped by Boris Johnson's government on the grounds it would be politically difficult to support wealthy bankers at a time of a cost of living crisis.

Mr Kwarteng, appointed chancellor by new prime minister Liz Truss following her victory over ex-Number 11 inhabitant Rishi Sunak in the Tory leadership contest, would set the move in the context of the energy bill aid for households and businesses, the FT report added.

It could also be defended on the basis that Paris is offering an incentive - a 30% income tax rate - to attract investment banking professionals to the French capital.

The fear within Number 11 Downing St would be that any brain drain across the Channel would be to the detriment of UK tax revenues.

He is expected to outline to MPs next week the details of further support through the PM's long-promised tax cuts to help boost spending and growth in the economy.

Sky News reported last week that the chancellor was holding talks with bank bosses to outline the new administration's approach. 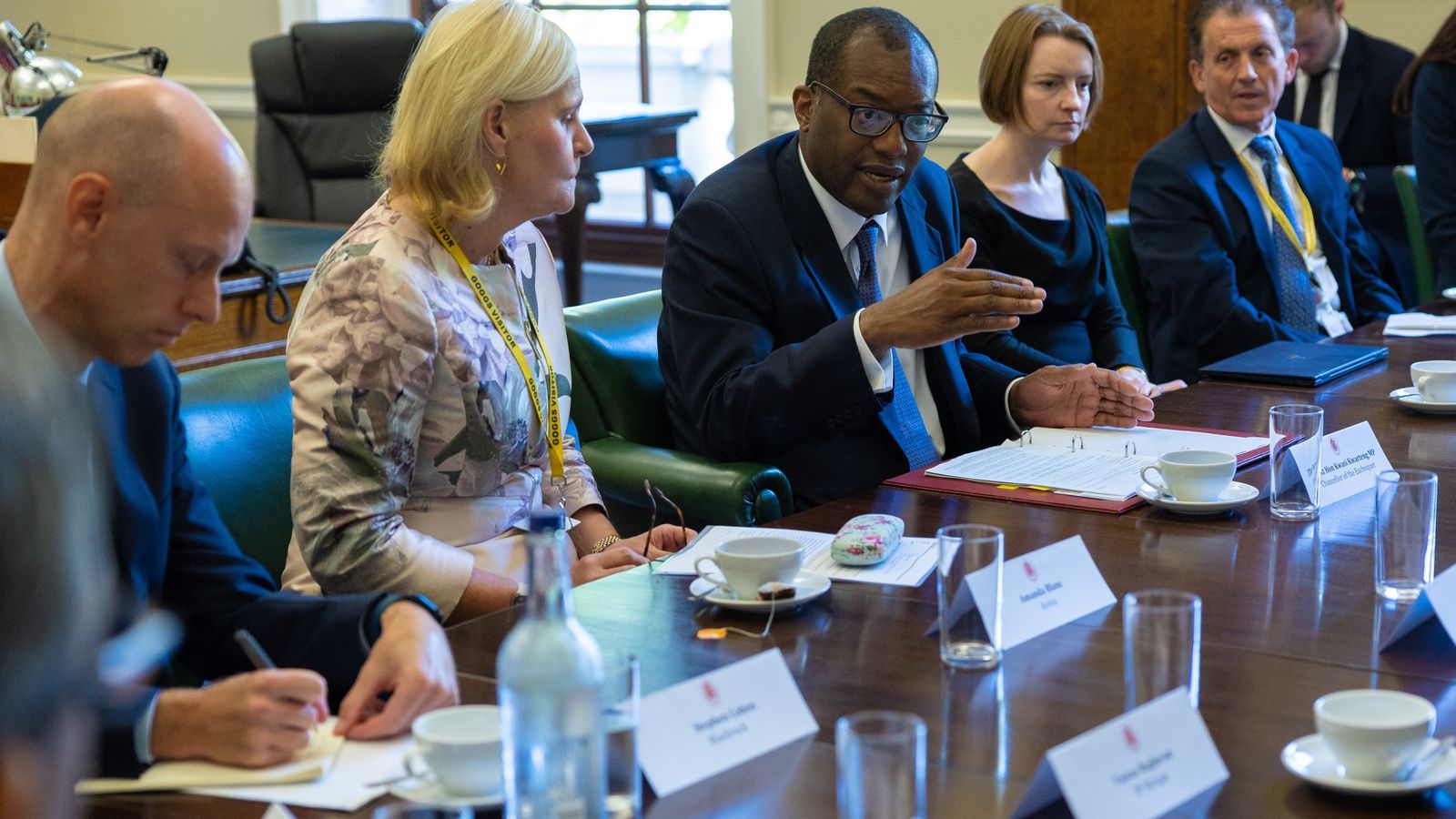 The chancellor met City leaders at the Treasury last week

It is not known whether a need to overturn the cap was impressed on him during that meeting.

Banks have long argued that the EU rule pushes up base salaries in London to secure talent, making the likes of New York and Hong Kong more attractive in terms of their fixed costs.

Sky News has contacted the Treasury for a statement.

The union reaction was predictably critical.

Unite general secretary, Sharon Graham, said: "Workers will be appalled and angry at these plans.

"When millions are struggling to feed their families and keep the lights on, the government's priority appears to be boosting the telephone number salaries of their friends in the city.

"Britain's economy is now dominated by rampant profiteering. Removing the cap on banker's bonuses will make that worse.

"Last year Britain's banks made £45.6bn of profits. So the Chancellor's signal to the city is 'let it rip' further and further, while the Bank of England lectures workers about pay restraint. You could not make it up."