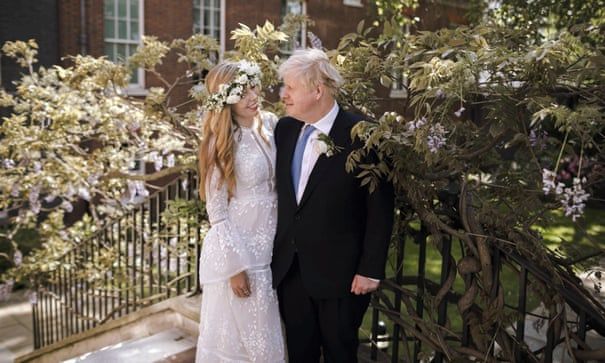 Catholics question why Boris Johnson was able to marry in church

Catholics, including members of the congregation at Westminster Cathedral, have questioned why the prime minister was able to be married in a Catholic church following his two previous divorces.

Boris Johnson married Carrie Symonds at the cathedral in a ceremony with 30 friends and family on Saturday, planned in strict secrecy and reportedly carried out by Father Daniel Humphreys, who baptised their son Wilfred last year.

Symonds, who will be taking Johnson’s name, has spoken publicly of her Catholic faith, while Johnson was baptised into Catholicism but renounced it for Anglicanism during his Eton schooldays, according to biographers.

Catholic law, which does not recognise divorce, usually does not permit the remarriage of those whose former spouse, or spouses, are still alive. Johnson was divorced from his first wife, Allegra Mostyn-Owen, in 1993, and finalised his divorce from his second wife, Marina Wheeler, in November last year.

Father Mark Drew, an assistant priest in Warrington, tweeted in response to the news: “Can anyone explain to me how ‘Boris’ Johnson, who left the Catholic church while at Eaton [sic] and is twice divorced, can be married at Westminster Cathedral, while I have to tell practising Catholics in good faith who want a second marriage in Church that it’s not possible?”

The rector of St Paul’s in Deptford, Father Paul Butler, tweeted: “Always one canon law for the rich and one for the poor.”

Christopher Lamb, Rome correspondent for the Catholic magazine the Tablet, said many might conclude that the rules do not apply to the prime minister. “There will be a feeling that, why are some people who are divorced allowed to be married in the church and others not?” he told BBC Radio 5 live.

“And I think that’s where the church can look at its current rules and see how it can become more welcoming. It has been welcoming to Boris Johnson, why not to others?” 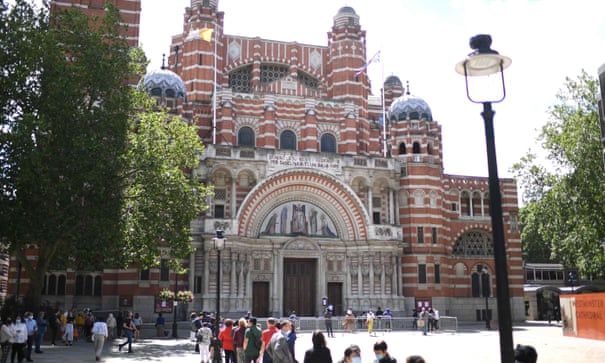 Westminster Cathedral. The bride and groom are both parishioners and baptised Catholic.

According to the papal biographer Austen Ivereigh, the prime minister’s two previous marriages were unlikely to have been recognised in Catholic law, as his former spouses were not Catholic, nor were the weddings Catholic ceremonies. Therefore, a “simple administrative process” was likely to have been used to declare the previous marriages invalid.

He wrote on Twitter: “Boris’s two previous marriages (probably) lacked canonical form, that is, are not recognised in Catholic law. So he (probably) didn’t need an annulment. When the canonical form of marriage has not been observed and the marriage was not later validated in the Church, a simple administrative process is used to declare such marriages invalid in church.”

The Catholic church does not allow same-sex marriages or blessings of same-sex couples to take place in church. Father James Martin, editor-at-large of the Jesuit magazine America, tweeted: “Mr and Mrs Johnson were married within the rules of the Catholic church. And I wish them well. I also wish that the same mercy and compassion that was offered to them, recognising their complex lives, could also be extended to same-sex couples who are lifelong Catholics.”

One member of Westminster Cathedral’s congregation told the Telegraph that she had asked the priest for clarification on the rules surrounding divorcees following the Johnson wedding. The woman, named only as Maria, was reportedly baptised in the cathedral and had been attending for 70 years.

Another congregant, Christopher Goodyear, 64, from Chelsea, told PA Media that it was “nice to have a prime minister who’s Catholic” and wished the couple well. “He’s now married in the Catholic church so he can’t get married again – if he does then that invalidates everything,” he added. “So let’s hope he keeps his trousers on and behaves himself.”

Asked whether Cardinal Vincent Nichols, the archbishop of Westminster, approved the marriage, a spokesperson said the cardinal’s approval was not required as the wedding “proceeded according to the norms of the Church without exception”.

“The bride and groom are both parishioners of the Westminster Cathedral parish and baptised Catholic,” read a statement on behalf of the diocese of Westminster. “All necessary steps were taken, in both church and civil law, and all formalities completed before the wedding. We wish them every happiness.”