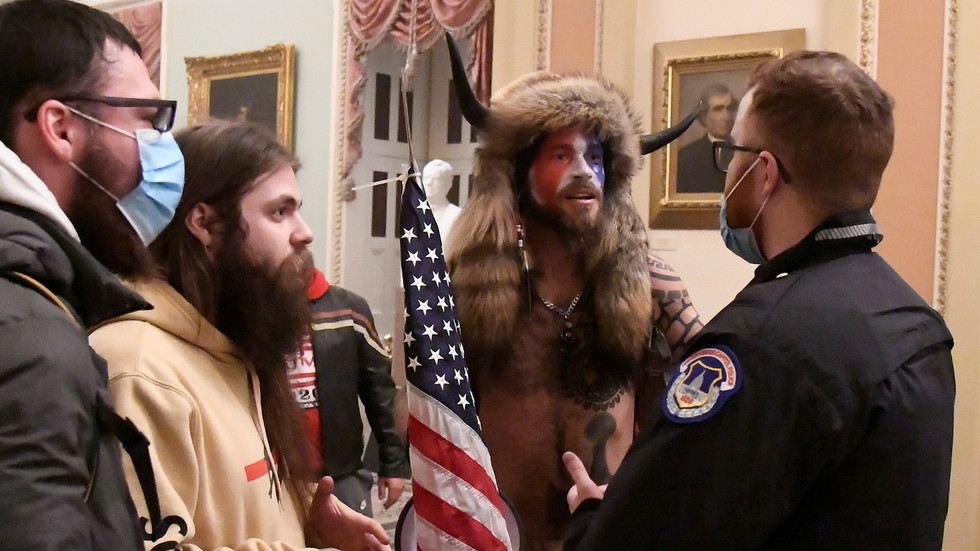 Jacob Chansley, better known as the ‘QAnon Shaman,’ has been sentenced to 41 months in prison for his role in the January 6 US Capitol riot. He pleaded guilty to obstruction of an official government proceeding.

Wearing a horned helmet, furs and facepaint, Chansley became one of the most prominent faces of the riot on the day Congress met to certify the results of the 2020 election. He turned himself in to police on January 9 and was indicted on six counts, including civil disorder and “parading, demonstrating, or picketing in the Capitol building.” The other charges were dropped as part of his plea agreement in September.

Prosecutors called for the maximum sentence of 51 months while the defense asked for a “significant downward departure” from the 41-month minimum, citing a variety of extenuating circumstances. US District Judge Royce Lamberth ultimately handed down the 41-month sentence on Wednesday.

While the media and many US politicians have referred to the events of January 6 as an “insurrection,” neither Chansley nor any of the several hundred people arrested and indicted over the riot was actually charged with that offense.

At the moment the Capitol was stormed by a crowd including supporters of then-President Donald Trump, the joint session of Congress was starting to consider Republican objections to the 2020 presidential election results. One of the rioters was fatally shot by a Capitol Police officer. As a result of the riot, Congress discarded the objections and moved to certify Democrat Joe Biden as the next US president.
#donald trump  #joe biden
Add Comment