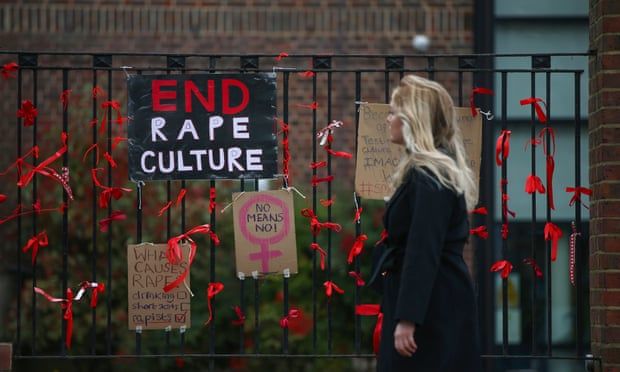 Serious allegations of sexual misconduct within schools must be investigated by Ofsted as part of a “deep dive” inquiry to establish why complaints by pupils of rape, harassment and assault are still not being taken seriously.

The call comes from the Conservative MP Maria Miller, who oversaw a groundbreaking report into this issue in 2016, but believes a disturbing culture has been allowed to take root.

“Nothing has changed in the last five years,” she said. “Ofsted needs to now look at the data it’s been collecting to find out why the situation has not improved for children.”

It comes as pupils’ accounts of rape, harassment and assault on a survivors’ website topped 8,000 and police said the school rape culture revelations could lead to the biggest increase in reports of sexual abuse since the Jimmy Savile scandal.

A special national helpline is expected to be set up this week and police say the total number of allegations could exceed the 11,000 victims on the national database for Operation Hydrant, set up to record victims of sexual abuse.

Simon Bailey, the national police lead for child protection, said: “This could be the biggest explosion in sexual abuse since Jimmy Savile. It has the potential to be.” Revelations about Savile in 2012 led to a flood of calls and referrals to police about sexual abuse, and scores of convictions.

Amid controversy over how police treat sexual abuse survivors and investigate their allegations, Bailey said: “Every victim who comes forward will be believed, will be listened to and dealt with sensitively.”

Miller, who chaired the women and equalities committee which carried out the inquiry into sexual harassment and violence in schools, said government had accepted many of her report’s recommendations, but schools appeared to be failing to heed new guidance.

“In particular, the government changed the statutory guidance on how to tackle behaviour in schools to make it plain that peer on peer abuse was not acceptable and could never be justified as part of growing up.

“Following the inquiry, Ofsted was required to monitor how sexual harassment was recorded and what action was taken. What I think now, very strongly, is we need to have Ofsted do a deep dive on the issue of the handling of sexual harassment in schools.”

Ofsted is not required to investigate individual allegations, which fall to the appropriate authorities such as the police or local authority. Inspectors are however required to look into any safeguarding concerns raised before or during an inspection.

Inspection teams also ask schools for any records and analysis of sexual harassment or sexual violence, and follow-up any incidents that have not been adequately addressed. Inspectors also check staff have had adequate training on how to handle peer-on-peer abuse. Ofsted was approached by the Guardian but declined to comment.

Gavin Williamson described recent accounts of sexual violence in schools, highlighted by the Everyone’s Invited website which has now collected almost 8,400 testimonies, as shocking and abhorrent and promised redress.

The education secretary tweeted: “Any victim of these sickening acts that we’ve seen reported should raise their concerns with someone they trust, whether that’s a family member or friend, a teacher, social worker, or the police. We will take appropriate action.

“No school – whether an independent school or state school – should ever be an environment where young people feel unsafe, let alone somewhere that sexual abuse can take place.”

Paul Whiteman, general secretary of the National Association of Head Teachers, said: “There is clearly an urgent need to ask ourselves what more we can all do to prevent sexual harassment and violence now and in the future.

“There is no doubt that schools can and should play a key role in this work, but this is a problem that reaches far beyond the school gates.”

Calls are mounting for an independent inquiry. Labour leader Keir Starmer said: “I’m really worried about what we are seeing over recent days, and I know many parents will be, many school teachers and staff and, of course, young people.

“There’s got to be an inquiry and it has got to get going very fast; this is serious,” he told reporters during a visit to Milton Keynes.

Barnaby Lenon, chairman of the Independent Schools Council (ISC), also backed an inquiry into the sexual abuse allegations, many of which have been targeted at leading private schools.

He told PA Media: “I would have thought it would be helpful if it went beyond schools. Clearly they are going to look at schools and there’ll be some things which schools can do or should do which other agents can’t do or won’t do.

“But if it’s going to be an independent inquiry, you’re going to want to look across the whole spectrum of institutions, and also incidentally of time, because we know that this is not a new problem.”

The Charity Commission is monitoring allegations affecting independent schools, most of which are registered charities. A spokesperson said: “We are continuing to monitor this situation closely to determine our next steps. In line with our guidance, the charities named in these allegations have made serious incident reports to the commission.”

A new national helpline is expected to be operational this week to encourage victims to report their experiences, with allegations then referred to police in their area. Miller said, however, that what was needed was a culture change in schools. “A helpline is not going to answer the problem. It will just drive a reporting frenzy, which the police will probably not be able to handle.”

A government spokesperson said: “We are very concerned by the significant number of allegations recently posted on the Everyone’s Invited website. The abuse of children and young people in all its forms is abhorrent.

“The vast majority of schools, colleges and universities take their safeguarding responsibilities very seriously, so it is particularly shocking when allegations of abuse are made in connection with a place of education where everyone should feel secure and be protected.

“Working together, the Department for Education, the Home Office and the National Police Chiefs’ Council are in contact with Everyone’s Invited to provide support, protection and advice to those who are reporting abuse, including on contacting professionals or the police if they wish.”
Add Comment