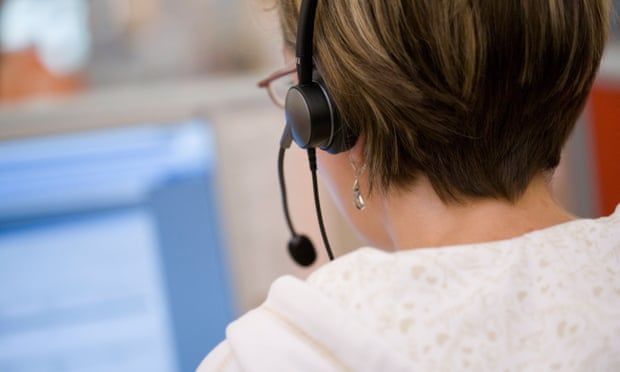 Exclusive: Teleperformance, which employs 380,000 people, plans to use specialist webcams to watch staff

Thousands of staff at one of the world’s biggest call centre companies face being monitored by webcams to check whether they are eating, looking at their phones or leaving their desks while working from home, the Guardian has learned.

In a sign of potential battles ahead over the surveillance of remote staff after the pandemic, Teleperformance – which employs about 380,000 people in 34 countries and counts dozens of major UK companies and government departments among its clients – has told some staff that specialist webcams will be fitted to check for home-working “infractions”.

While these will in part be used for team meetings and training, the cameras are also connected to an artificial intelligence system that will randomly scan for breaches of work rules during a shift. If one is detected, a still photo will be sent to a manager and stored for up to 20 days, according to documents sent to staff.

If workers need to leave their desks, for example to have a drink, they will have to click “break mode” in an app to explain why – for example, “getting water” – to avoid being reported for a breach.

Eating while on shift is not permitted, staff are told. “If the system detects no keyboard stroke and mouse click, it will show you as idle for that particular duration, and it will be reported to your supervisor. So please avoid hampering your productivity.”

A training video about the webcam system, seen by the Guardian, says it “monitors and tracks real-time employee behaviour and detects any violations to pre-set business rules, and sends real-time alerts to managers to take corrective actions immediately”.

The move triggered warnings from unions and MPs about the normalisation of home surveillance by employers as growing numbers of workers move away from being office-based.

The revelations came to light after some of Teleperformance’s 10,000 UK employees were told that cameras, including the AI-based scanning system, would be installed next month for staff continuing to work from home.

When approached by the Guardian, the company said the remote scans would not be used in the UK. Webcams for UK staff could not be operated remotely and would only be used for meetings and training, and for scheduled video calls when supervisors would check desks for devices not allowed for data security reasons, such as phones, a spokesperson said.

Levels of remote scrutiny would be different in other countries, it said.

While not a household name, the France-based company is one of the world’s biggest suppliers of outsourced phone services, including customer assistance, telemarketing and technical support.

In Britain its clients include the health and education departments of the UK government, NHS Digital, the Student Loans Company, the RAF and the Royal Navy. The companies it works for include Vodafone, eBay, Aviva, Volkswagen and the Guardian. There is no suggestion any of these were aware of or involved in planning the new surveillance system.

Teleperformance is understood to be rolling out the full webcam surveillance system in other countries where it operates. The company declined to say whether any of its UK clients use staff based elsewhere who might be subject to the monitoring.

According to documents and video, at random times during a shift, the webcam system will scan the workspace for breaches, which include “missing from desk”, “detecting an idle user”, “unauthorised mobile phone usage” and another person being in the workspace area.

The cameras will also be set up with facial recognition so they can detect if someone else is sitting at the desk. Employees are told: “Any breach detected by the AI triggers a real-time alert to the supervisor for further actions.”

The company literature acknowledges that family or other household members cannot be kept completely away from workspaces, and said managers would not take action if their presence was detected “as long as the people in the background are not directly looking into the screen, or very close to it”. To avoid this, staff are asked to have their screens facing a wall.

Staff working at night are instructed to ensure their desk has sufficiently strong lighting to ensure the camera can see what is happening.

Howard Beckett, assistant general secretary of Unite, said the union would “fight legally and industrially to prevent any push to normalise home surveillance”.

Andy McDonald, the shadow employment rights minister, said that particularly when companies were relying on home-working staff to keep them going, it was wrong to impose “invasive surveillance that will erode their rights to privacy and create a climate of fear and mistrust”.

After the Guardian asked Teleperformance about UK staff concerns, a senior manager contacted employees to explain that they would not be randomly monitored, adding that it was “extremely disappointing” the media had been alerted and that this was considered gross misconduct. It is not clear why UK staff were initially told to expect the comprehensive surveillance system.

A spokesperson for Teleperformance said the company wanted to discuss any concerns with workers and that the webcam system was intended “to respond to the overwhelming concerns of isolation, lack of team engagement and support, not seeing anyone from one day to the next, raised by those who are at home”.

She said: “We absolutely trust them to do their jobs in a professional manner. We are taking very seriously the concerns you raised … as they can be no further from the truth.”

No staff would be forced to work from home, the spokesperson said, and discussions would take place to reassure them. It was, however, “of utmost importance that our employees work in a secure home office environment to meet our clients’ and their customers’ expectation of a high level of protection when it comes to processing their personal data, including sensitive personal data”, she said.