Burning intensely and choking the air with smoke, California’s raging Mosquito Fire has destroyed 46 structures and continues its unrelenting spread through dry forests in the Sierra Nevada mountains.

The blaze – the largest currently burning in California – began amid extreme heat September 6 and has grown to about 50,000 acres in El Dorado and Placer counties with only 18% containment as of Tuesday morning, according to Cal Fire.

Flames advanced on mountain communities as the fire grew, destroying more than two-dozen homes and 21 other buildings, according to fire officials. More than 11,200 people have had to flee their homes and 5,800 structures were still threatened Tuesday as the firefight continued.

As the sun rose Monday, the damage was visible along Michigan Bluff Road, where the fire had torched cars, buildings and trees, leaving charred remains as it continued to tear through the landscape, video from CNN affiliate KOVR/KMAX showed.

The fire on Monday night was pushing deeper into dense forested areas, where authorities were expecting an uptick in fire behavior amid “historically dry fuels” in the area, Cal Fire fire behavior analyst Jonathan Pangburn said in a Monday evening briefing.

Crews took advantage of cooler temperatures and higher humidity settling over the fire area on Monday, but there was still no containment on the northeast side of the fire, officials said.

The Mosquito Fire is among numerous blazes currently burning in Western states, blanketing the skies with smoke and spurring air quality alerts across much of California, Washington, Oregon and Idaho.

Smoke from the Mosquito Fire advanced across state lines into Nevada, where a time-lapse video posted by the National Weather Service in Reno, showed a wall of smoke crashing into the state Sunday. The smoke created unhealthy to hazardous air quality in the region and was expected to linger in the Tahoe Basin and Reno area through Monday, the weather service said.

Placer County health authorities warned residents about elevated levels of particulate matter in the air, which can be inhaled deep into the lungs and seep into the bloodstream.

Wildfire smoke can hurt the eyes, irritate the respiratory system, and worsen chronic heart and lung diseases, according to the Centers for Disease Control and Prevention. The smoke can be particularly dangerous for children, people with heart or lung disease, older adults and pregnant people. 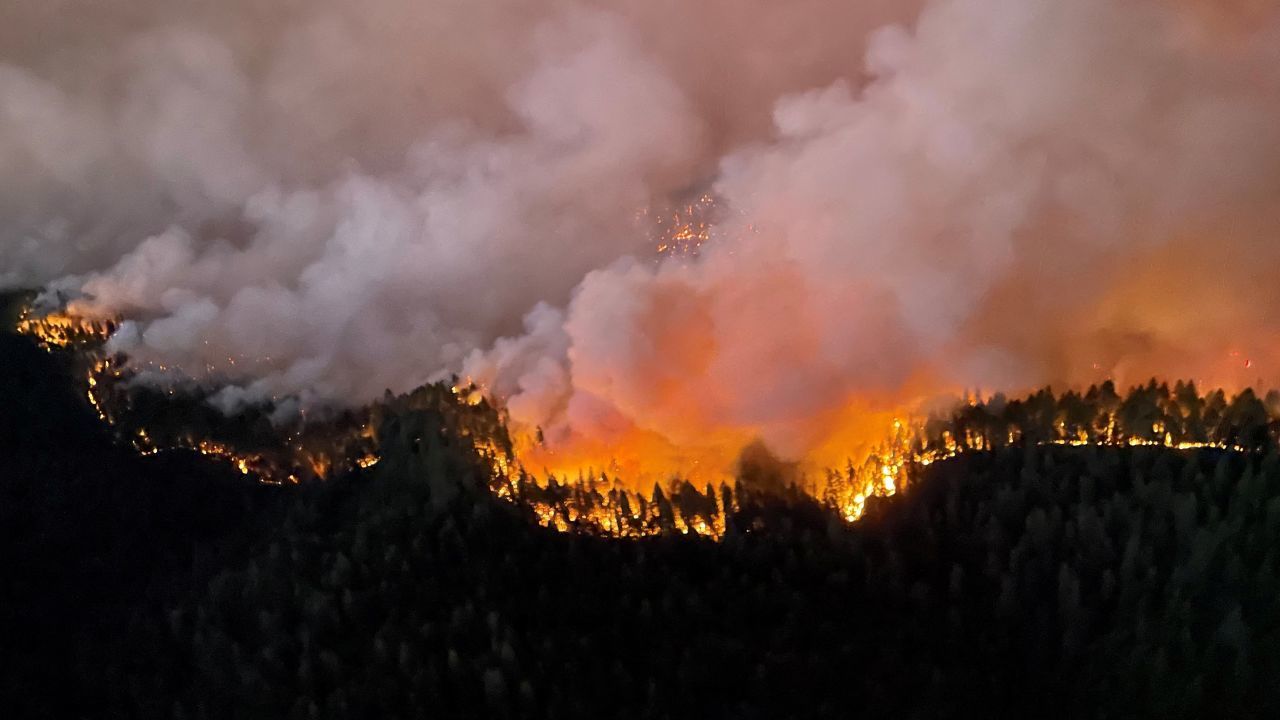 Crews in the Sierra Nevada mountains were among several engaged in grueling firefights against raging wildfires this week.

Nationwide, 93 active large wildland fires have torched about 850,000 acres in several western states, according to the National Interagency Fire Center.

Drought-stricken Western states are home to large swaths of dry brush that can transform into fuel for infernos, particularly in mountain communities.

In California, crews were battling 12 different wildfires. One of them, the Fairview Fire in Riverside County, had scorched 28,307 acres by Tuesday after sparking a week prior. Crews, aided by lingering tropical moisture and cooler temperatures, managed to up containment of the blaze to 62%.

To the north, firefighters also appeared to be getting a better handle on the Mountain Fire, which was 65% contained at 13,359 acres Tuesday.

In Oregon, the lightning-sparked Cedar Creek Fire has quadrupled in size since last week, burning about 93,000 acres. As of Tuesday, it was still burning uncontrollably with 0% containment.

In Idaho, the Moose Fire was 127,500 acres with 37% containment, according to Inciweb, a clearinghouse for US fire information. Firefighting efforts were hampered by grounded helicopters for much of Monday as smoke and haze limited visibility, creating unsafe flying conditions, fire officials said.