California is battling its worst wildfire this year with more than 51,000 acres burned and evacuations mounting.

Chaotic weather is threatening to make matters worse. Crews battling the McKinney Fire in northern California were bracing for thunderstorms and hot, windy conditions that created the potential for additional fire growth Sunday.

"The fuel beds are so dry, and they can just erupt from that lightning," Freeman said. "These thunder cells come with gusty, erratic winds that can blow fire in every direction."

The blaze exploded in size to more than 80 square miles just two days after erupting in a largely unpopulated area of Siskiyou County.

The blaze torched trees along California Highway 96, and the scorched remains of a pickup truck sat in a lane of the highway. Thick smoke covered the area and flames burned through hillsides in sight of homes. 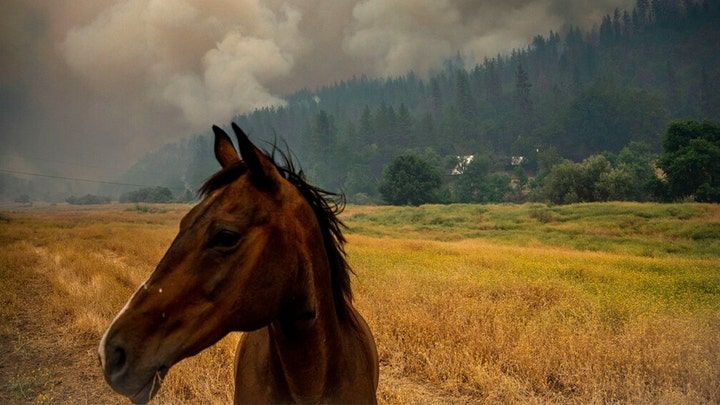 A horse grazes in a pasture as the McKinney Fire burns in Klamath National Forest, California, July 30, 2022.

A second, smaller fire just to the west that was sparked by dry lightning Saturday threatened the tiny town of Seiad. About 400 structures were under threat from the two California fires.

A third fire, which was on the southwest end of the McKinney blaze, prompted evacuation orders for around 500 homes Sunday, said Courtney Kreider, a spokesperson with the Siskiyou County Sheriff's Office. The office said crews had been on the scene of the fire since late Saturday but that the fire Sunday morning "became active and escaped its containment line."

As the McKinney fire threatened, some residents chose to stay behind while others heeded orders to leave. 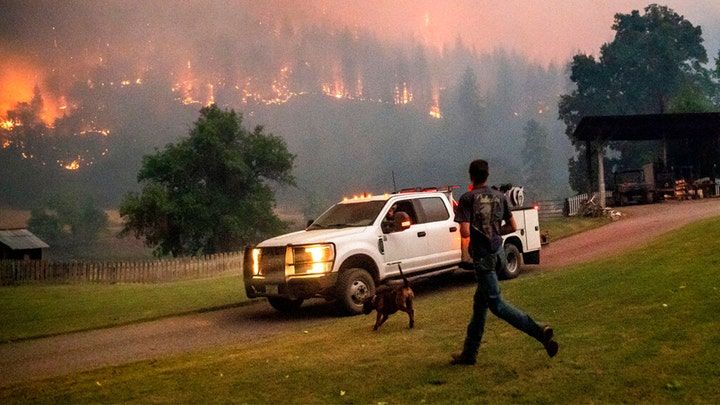 A man runs to a truck as a wildfire called the McKinney Fire burns in Klamath National Forest, California, July 30, 2022.

California law enforcement knocked on doors in the towns of Yreka and Fort Jones to urge residents to get out and safely evacuate their livestock onto trailers. Automated calls were being sent to land phone lines as well because there were areas without cellphone service.

The Pacific Coast Trail Association urged hikers to get to the nearest town while the U.S. Forest Service closed a 110-mile section of the trail from the Etna Summit to the Mt. Ashland Campground in southern Oregon.