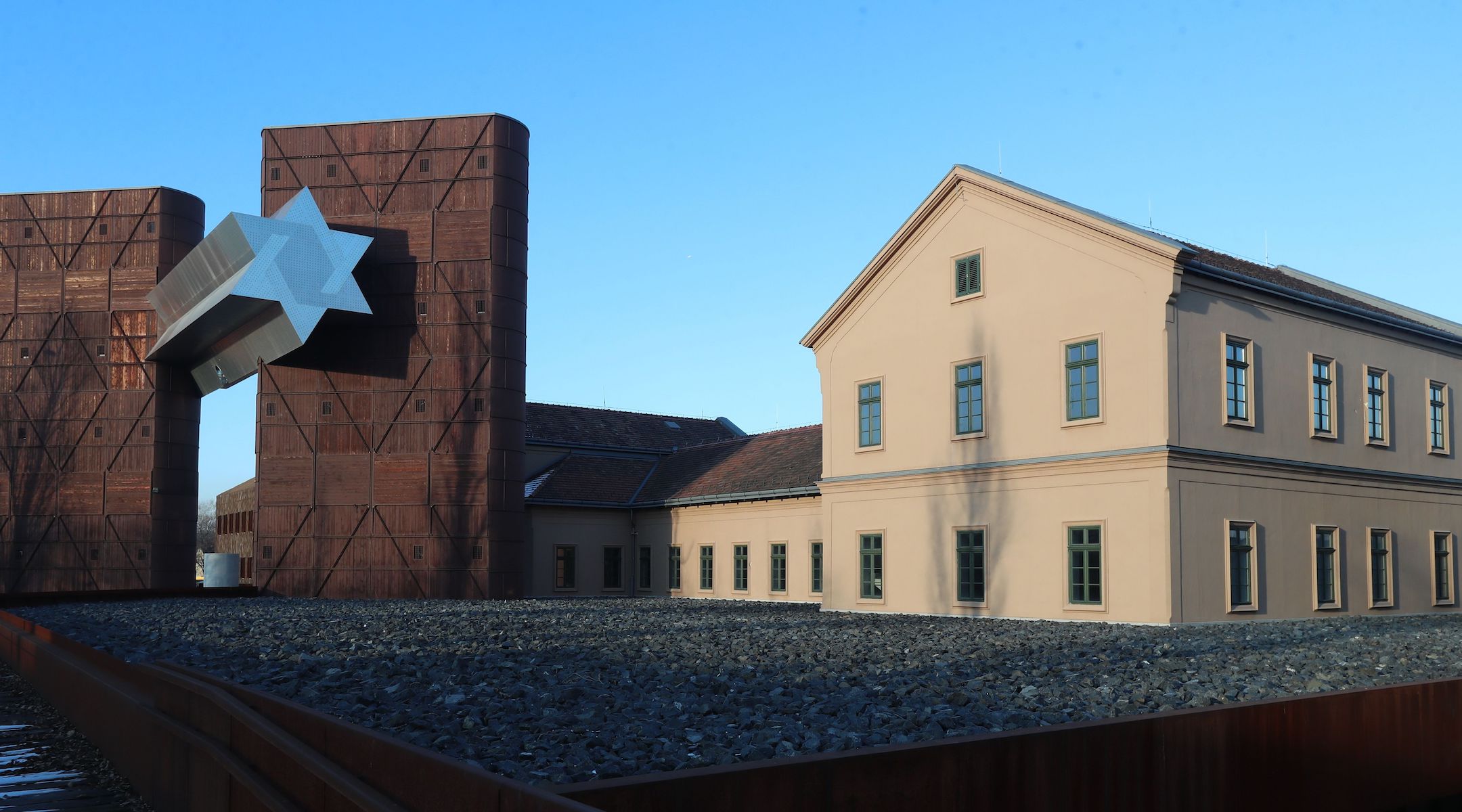 The "House of Fates" has been widely shunned as an attempt by Hungary's right-wing government to rewrite history.

The regular commuters on Fiumei Way, a major traffic artery in this city’s east, are already used to the unusual monument that locals call “the Jewish star.”

Built in 2015, the monument comprises a 60-foot-long six-pointed metal corridor that is suspended in midair, connecting two towers of stacked-up cattle wagons. It looks like a Star of David-shaped ray of light blazing through a pair of apartment buildings.

It’s by far the tallest and most eye-grabbing memorial for the Holocaust in a country where the work of commemorating the genocide is complicated by the fact that many locals at the time were complicit in it.

It’s also not open, and hasn’t been since construction was completed in 2015 — making it a $30 million, rat-infested symbol of the bitter fights between some Jewish community leaders and the right-wing government of Prime Minister Viktor Orbán, and among themselves, over how to commemorate the Holocaust.

Recently, significant milestones have been reached in the effort to restart the project and steer it out of the impasse. A local Jewish group has recruited a team of prominent historians who say they are committed to historical accuracy and to taking the museum out of the political debate.

The story of the museum, whose temporary name is the House of Fates, underlines how the legacy of the Holocaust keeps Jews from being fully integrated into Hungarian society. It also illustrates how Hungarian Jews are themselves deeply divided over how to commemorate the Holocaust. 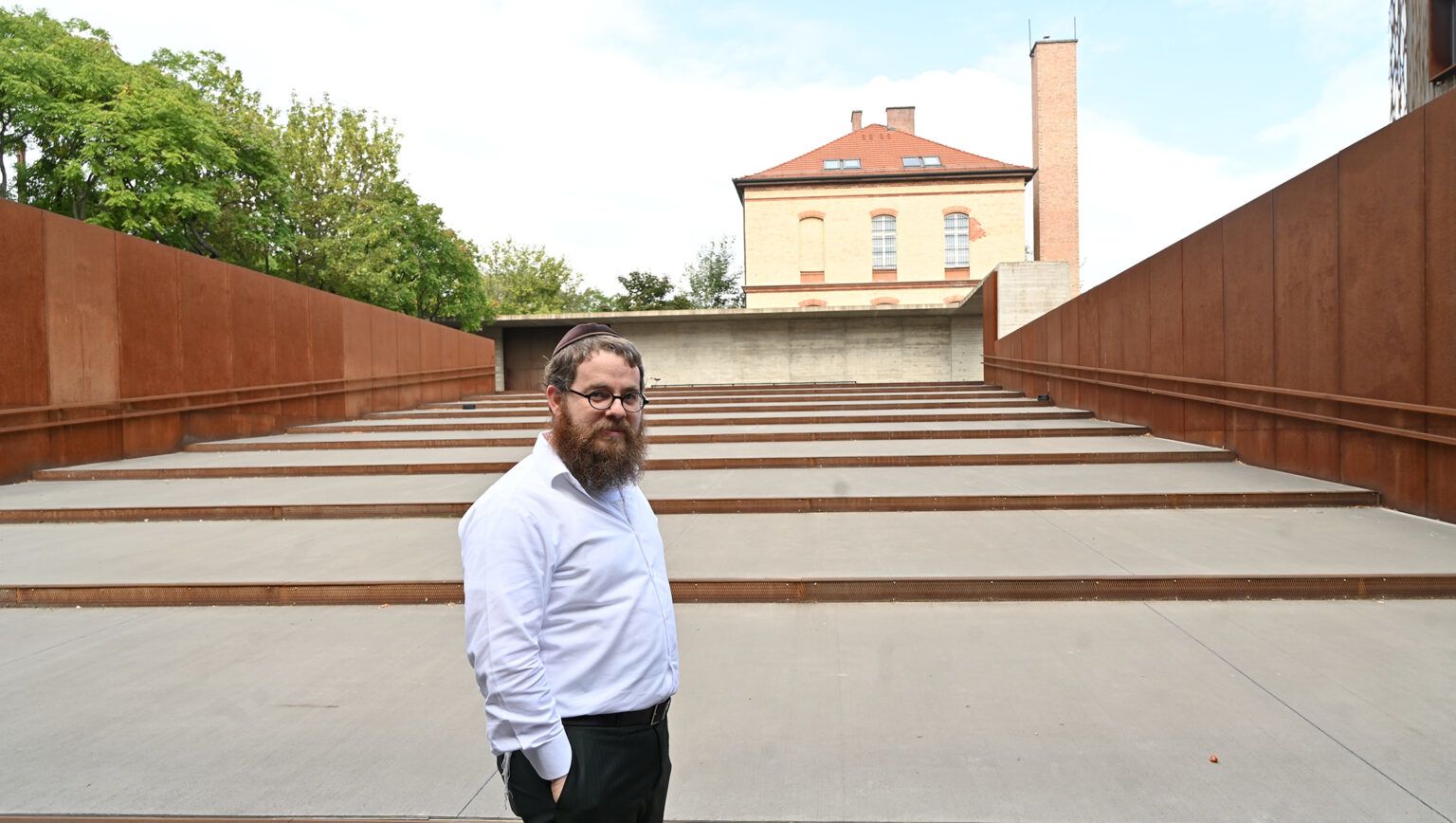 Rabbi Slomo Koves stands in front of the Star of David-shaped elevated corridor at the House of Fates Holocaust museum, housed in a former railway station that deported Jews to concentration camps, seen in Budapest, Hungary, Aug. 27, 2021.

The saga began in 2012, when Orbán’s government tapped Maria Schmidt, a right-wing historian whose critics say has drawn inappropriate parallels between communism and Nazism, to lead the establishment of a new Holocaust museum at the former Józsefváros Railway station. From this station, which visitors can observe from above after climbing up to the Jewish star monument, Jews from Budapest had been deported to death camps during World War II.

Due to Schmidt, the project had limited support in Jewish circles from the onset. Openness to it completely evaporated in 2014, when the Orbán government and Mazsihisz, Hungary’s largest Jewish group, clashed publicly over the government’s erection of a statue honoring the victims of Nazism in Budapest. Critics said the statue was an attempt to whitewash local complicity.

The statue features an angel, understood by many to represent Hungary, being attacked by an eagle, understood to represent Nazism. Orbán disputed this interpretation and ignored protests by Mazsihisz and beyond, leading to a rupture in relations between Mazsihisz and the government. Mazsihisz said it is boycotting the new museum, as did Yad Vashem, Israel’s national Holocaust museum.

The row has left the museum, with its 600,000 square feet of floor space, finished but unfurnished, with pigeons and bats taking up residence in the many nooks available to them across the 3 ½ acres that comprise the House of Fates museum and learning center complex in Budapest’s gritty 8th District.

Yet progress is being made toward finally opening the museum. 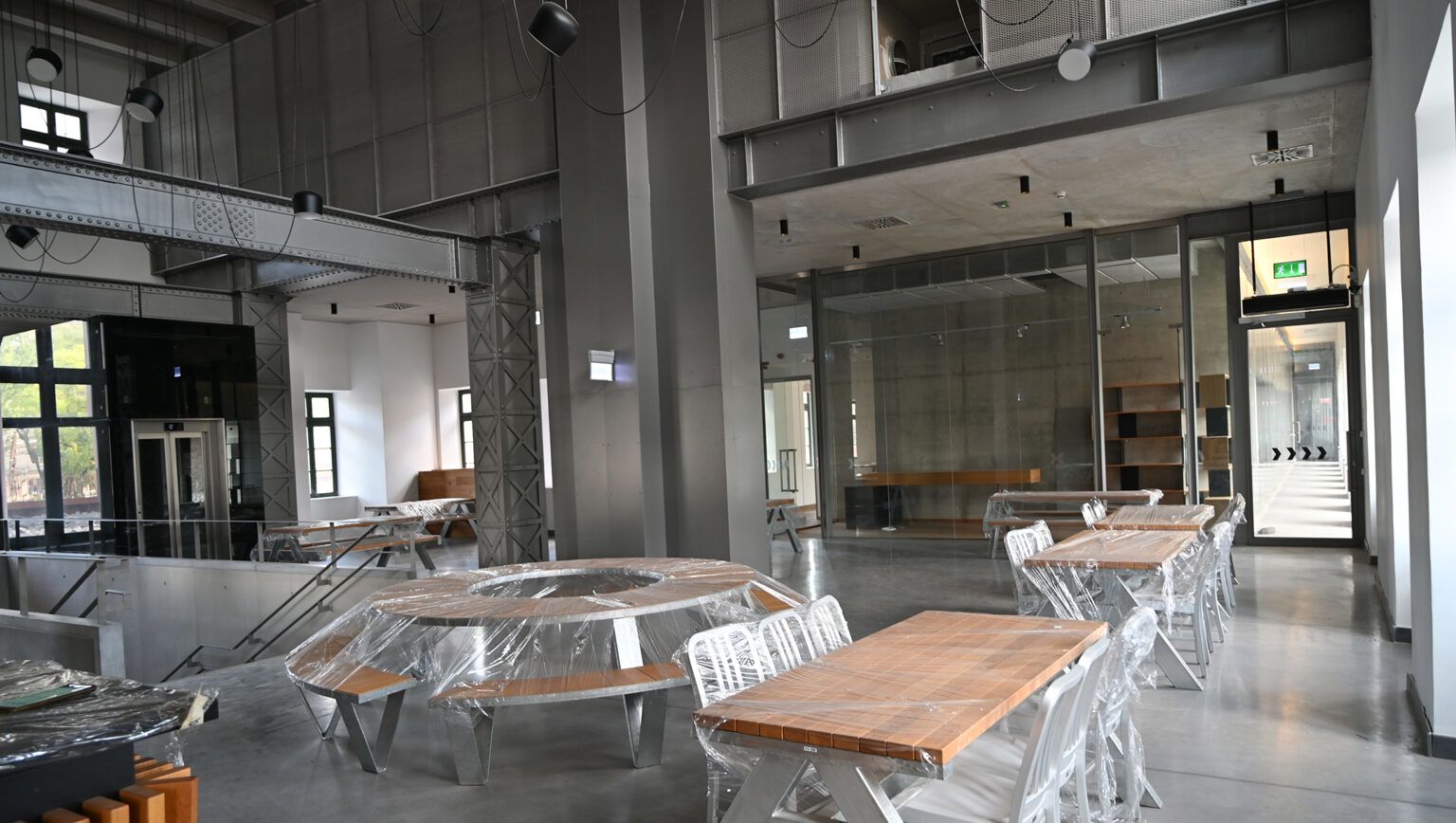 The cafeteria at the House of Fates Holocaust museum awaits visitors six years after it and the institution to which it belongs were supposed to be opened to the public.

In 2018, the government handed control of the museum to EMIH, a Hungarian Jewish group. EMIH’s leader, Rabbi Slomo Koves, told the Jewish Telegraphic Agency in August that Schmidt is out of the picture at the museum, which EMIH wants to rename as Etz Hayim, Hebrew for “tree of life.” Koves hopes to have the museum open by 2024.

“The museum had a difficult beginning,” Koves, 42, told JTA at the museum. “And to some, it has a stigma even without them seeing the content. We’re working on the content that will show the tragedy of the Holocaust in Hungary and inspire hope for the future.”

That’s not such a straightforward task, given that funding for the museum has largely come from the Hungarian government. In addition to its controversial commemorative actions, Orbán’s government has shown a keen interest in nurturing historical narratives that serve its populist brand of patriotism. This goal is scarcely served by exploring past complicity in genocide and institutionalized antisemitism that historians say is integral to the story of the Holocaust here.

An important indication that the museum would deal with these themes came with the printing in July of a new, 400-page concept paper for the new museum. The timeline for the concept — the first comprehensive one made for the museum’s exhibitions — begins in 1867, when Jews were made equal before the law in the Austro-Hungarian Empire, and ends in 2021.

Obtained by JTA exclusively, the document includes some inconvenient truths for Hungarian ultra-nationalists, who often favor the view that persecution of the country’s Jews began when the German army invaded in 1944.

Miklos Horthy, the pro-Fascist leader of Hungary prior to the invasion, whom many nationalists today regard as a hero, placed “limitation on the legal rights of Hungarian Jewry,” the document states. It also notes the infamous Numerus Clausus law, which Horthy’s government enacted in 1920. Restricting Jewish attendance in universities, it’s widely regarded as the interwar period’s first antisemitic law in Europe. 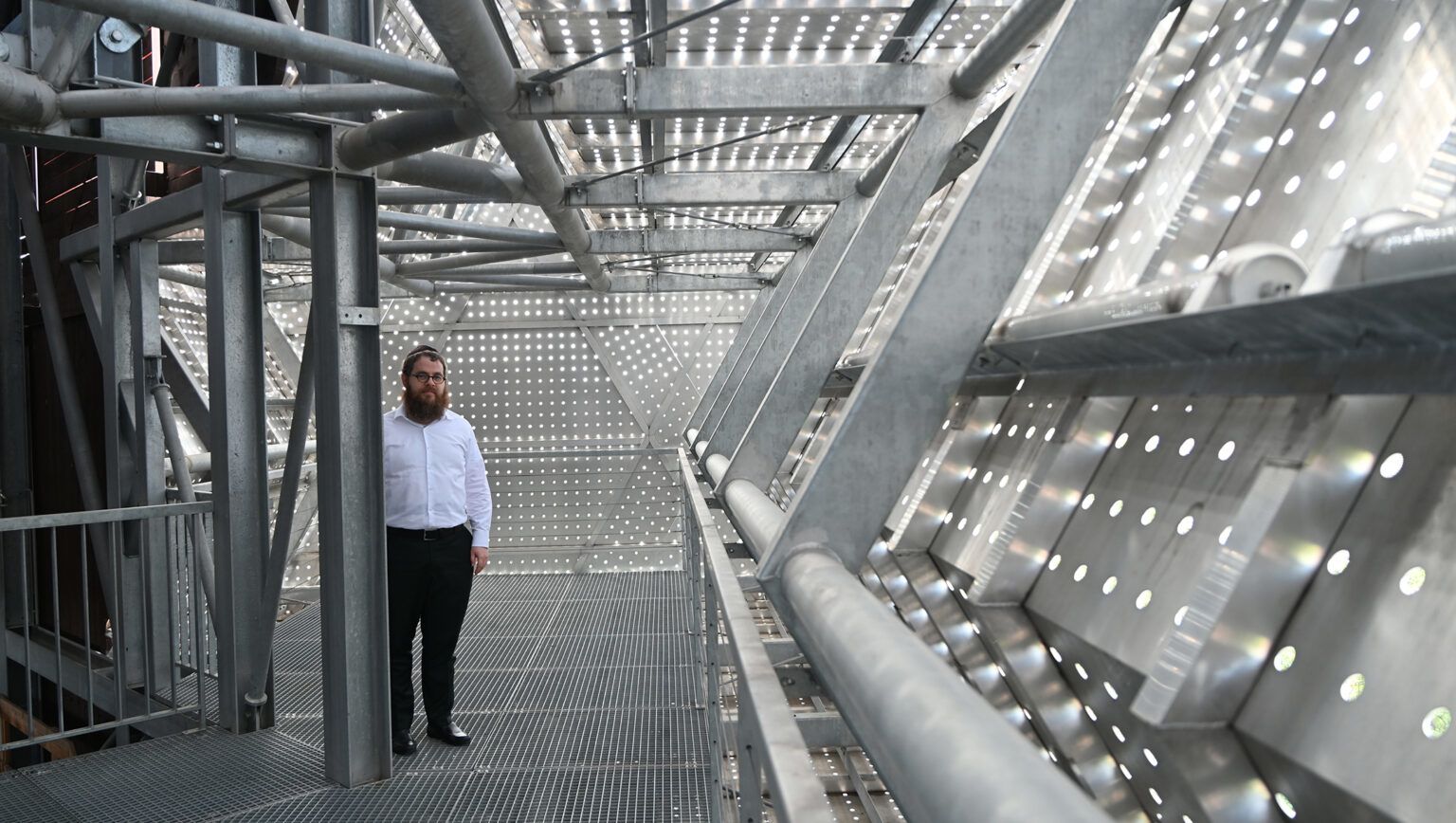 Rabbi Slomo Koves stands inside the Star of David-shaped elevated corridor at the House of Fates Holocaust museum, housed in a former railway station that deported Jews to concentration camps, seen in Budapest, Aug. 27, 2021.

In 1996, Gyula Horn, then prime minister, became the first Hungarian leader to acknowledge the state’s responsibility for the Holocaust in Hungary. He also apologized and took steps toward resolving restitution issues. Several of Horn’s successors repeated the admission, including Orban in 2017. During World War II, “we decided that instead of protecting the Jewish community, we chose collaboration with the Nazis,” Orbán said in a speech that year.

“The Hungarian gendarmerie and army brutally kill over 3,000 civilians,” the document says in its description of the 1941 Novi Sad massacre. “From July to August 1941 Hungary brutally deports approximately 18,000 Hungarian Jews,” a different entry reads. The timeline also covers the murder of thousands of Jews by the Arrow Cross Party, Hungary’s Nazi puppet regime, in 1944.

“This museum will record and reflect the responsibility, complicity and collaboration in the Holocaust of all the authorities of the Hungarian state leading up and during the Holocaust,” Koves said. Koves’ team has so far raised $1.5 million for creating the content. Another $1 came from the government.

He added that discussion of Hungarian complicity will appear gradually through the exhibition, and only after presenting the broader context of Jewish life in Hungary.

The gradual approach is not born out of any desire to be politically correct, he said.

In a country with a Jewish population of about 47,000 people, “the school trip to the Holocaust museum will for many students be the first point of contact with anything Jewish,” Koves explained. “This raises the stakes. It means that we shouldn’t open with the Holocaust or Auschwitz will be those students’ first and only association with Judaism.”

One of the goals of the museum is to show that “Jews were not only hopeless victims, but rather individuals of dignity who stood up mentally, spiritually and sometimes even physically against evil,” Koves said.

Koves recruited an international team of respected historians to join the steering committee of the museum. The team includes Yitzchak Mais, a former director of Yad Vashem; the Israeli Holocaust scholar Esther Farbstein; and David Marwell, a former director of the Museum of Jewish Heritage in New York.

The 90-yard-long main space, with its timeline, is designed to be viewed in about 60 minutes walking in a straight line. Side spaces will be equipped with screening rooms, interactive displays and panoramic immersion projection halls, in which visitors can easily spend a whole day, Koves said.

The museum will emphasize personal accounts as well. In a display titled “Encountering a Survivor,” visitors can study a digital file of individual survivors, complete with video recordings and frequently asked questions, which they can select and have answered in a prerecorded message by the survivor.

In one such testimony, Leo Adler, who moved to the United States after surviving the Holocaust as a child, remembers the last time he saw his father on a train station in Munkács before the father was deported to be murdered. “He called me aside, he said: ‘You’re the oldest. Try to look after the children, your mother.’ And the train slowly left.”

The museum team has recorded over 150 survival testimonies in Hungary, Israel and the United States.

Some critics insist the museum is doomed to fail because it is irreversibly tainted by Orban’s government, which initiated the institution.

“Not only abroad, but in Hungary too, the House of Fates is met with suspicion,” Laszlo Karsai, a prominent Hungarian Holocaust scholar, told JTA. He cited the involvement of Schmidt, the controversial historian.

Of Mais, Karsai said: “Maybe he wants to create a new Holocaust Disneyland in Budapest.” Of Koves, who in 2007 received a PhD in Hungarian Jewish history from the University of Debrecen, Karsai said: “He is not a historian. He is the court-rabbi of the present right-wing, nationalist, antisemite, xenophobe, autocratic kleptocracy, a collaborator of Prime Minister Orbán.”

Other Hungarian Holocaust scholars are more willing to give the new museum a chance.

“Even before its creation, the museum got sucked into the political battles of the left and the right here in Hungary. So the fight about it is not academic, it’s partisan,” said Janos Pelle, a Holocaust historian who is involved in writing some of the content for the new museum.

Farbstein, whose research focuses on how the Holocaust affected Orthodox Jewish communities in Hungary, says that so far she has encountered no censorship or intervention in her work on the museum. She will leave if that happens, she added.

“Frankly, I agreed to be involved with the museum before I knew everything about the intensity of the conflict around it,” Farbstein said. Now that she’s aware of it, she hopes that the museum can achieve its goal in an effective and dignified way despite the situation, she said.

“Surely it’s better to try to take the opportunity given here, of a world-class Holocaust museum in Budapest, than to prejudge and bury it,” Farbstein said. “I’m going to give it a shot because I think this has a chance of being something truly worthwhile.”