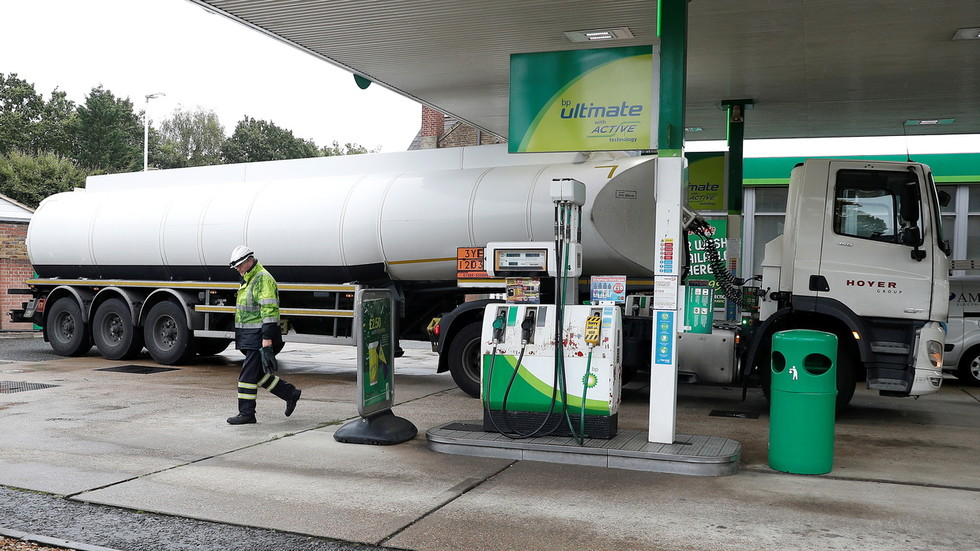 British Army to start delivering fuel to pumps next week, amid claims gas shortage ‘under control’ to quell panic buying

The UK government has called in the army to help ease the country’s fuel crisis by providing hundreds of troops to make deliveries to petrol stations, many of which have seen their pumps run completely dry amid panic buying.

"While the situation is stabilising, our armed forces are there to fill in any critical vacancies and help keep the country on the move by supporting the industry to deliver fuel to forecourts."

The move comes just two days after Prime Minister Boris Johnson tried to assure Brits that fuel supplies are returning to normal. He also urged consumers to “go about their business in the normal way,” filling up only when necessary, and said the UK’s supply-chain problems will be resolved before Christmas.

However, Johnson also put the army on standby, in case the military was needed to help ease the fuel crisis. The Operation Escalin troops have been undergoing training this week at haulier sites to learn how to fill up tankers and fuel pumps.

Even as government officials have claimed progress in distributing fuel supplies, queues at petrol stations have remained long, especially in London and southeast England. The Petrol Retailers Association (PRA), which represents about 5,500 of the UK’s 8,300 fueling stations, said a survey of its members showed that 37% of forecourts had no petrol or diesel to sell as of Wednesday morning. According to the BBC, that figure improved to 26% on Friday.

“There are early signs that the crisis at the pumps is ending, with more of our members reporting that they are now taking further deliveries of fuel,” PRA executive director Gordon Balmer said.

Environment Secretary George Eustice earlier this week argued that “there isn’t a shortage” of petrol and chided consumers for buying fuel “when they don’t need it.” Although he acknowledged that preparations were being made in case the military was needed, he said, “We’ve no plans at the moment to bring in the army to actually do driving.”

Meanwhile, the UK and wider continental Europe are also plagued by a surge in natural gas prices to record highs, putting energy suppliers at risk of collapse.