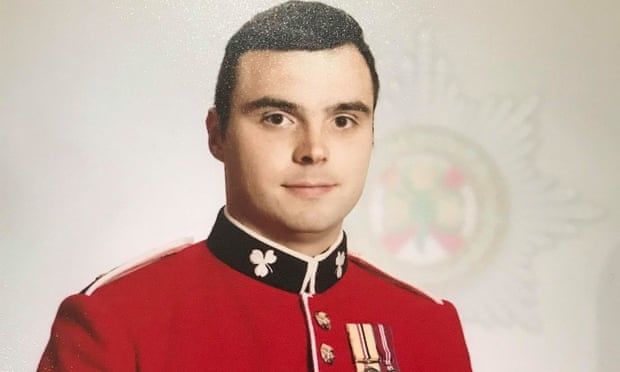 Body of L/Cpl Bernard Mongan, who had complained of bullying, lay undiscovered for three weeks

The British army has identified serious failings in its handling of the death of a soldier whose body lay undiscovered at a base for three weeks, according to reports.

L/Cpl Bernard Mongan, who had made bullying allegations and reportedly tried to kill himself in 2016, was discovered in his barracks in Catterick, North Yorkshire, on 23 January last year.

The 33-year-old Royal Signalman had been missing for three weeks without anyone noticing.

The army’s service inquiry report into his death, which is yet to be published but has been seen by the BBC, found the delay in discovering Mongan’s fate was “unacceptable and profoundly regrettable”.

The report added that “failings in the proper management of personnel led to the delay in the discovery of L/Cpl Mongan”, the BBC said.

Mongan’s complaints of bullying and concerns about his welfare were not properly investigated or passed on, the inquiry reportedly found. The panel that carried out the inquiry concluded its report “makes for sobering reading”.

Mongan, a father of three who had served in Iraq, spent Christmas leave in his room at Catterick barracks but was due to start an attachment with the army’s 77th Brigade in Berkshire on 7 January 2020.

Duty officers in Catterick had been told to contact those remaining in the barracks over the Christmas period to ensure they were safe and well, but the inquiry found the plan had “not been communicated and implemented as effectively as it should have”, the BBC reported.

Mongan had complained before his death that he was being bullied. He had kept a record of his “perceived mistreatment”. The inquiry panel found that the allegations had not been properly investigated.

Mongan was also the victim of a serious assault in Catterick in November 2018 which was being investigated by the Royal Military Police. Support for the victim was not effective, the report said.

There were also welfare and medical concerns surrounding the soldier that were not properly recorded or relayed. It was reported in 2016 that he had made “an attempt on his own life”. This was addressed at the time, but the information was not passed on.

In a statement to the BBC, Brig Edward Chamberlain, the head of the army personnel services group, said: “There were clearly failings in our duty of care to lance corporal Mongan.

“The delay in discovering he was deceased was unacceptable and profoundly regrettable. We are truly sorry that such a situation should have arisen.”

He said the wellbeing of members of the armed forces was critical. “In this case, we fell short of the standard which our armed forces and their families are entitled to expect, and for that we apologise.

“We will implement all the recommendations in the service inquiry to ensure an incident like this does not happen again,” he said.
Add Comment