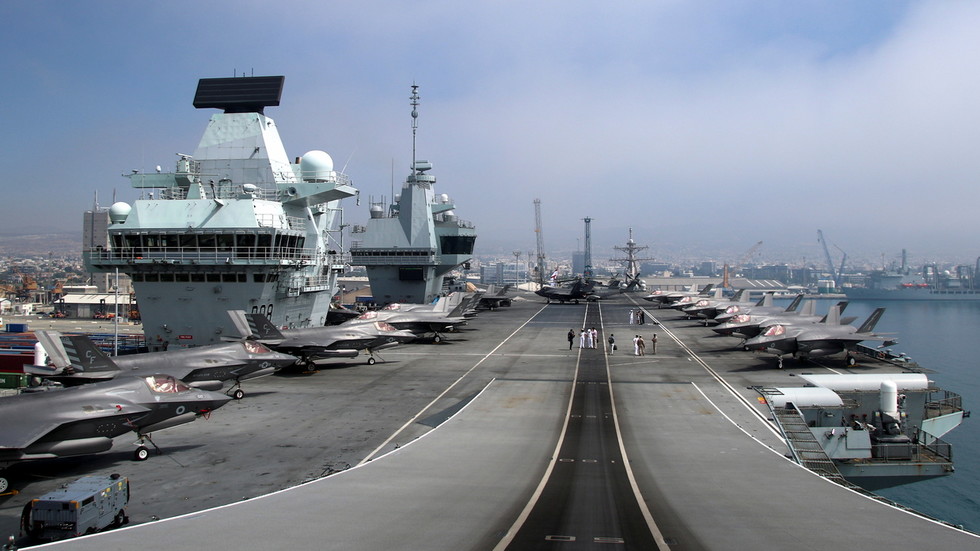 Britain’s flagship aircraft carrier has made a stop in Singapore as the UK showcases its military strength in the Indo-Pacific amid increasing tensions with what it sees as China’s increased assertiveness in the South China Sea.

On Monday, the HMS Queen Elizabeth arrived in Singapore after taking part in war games with Singapore’s military at the weekend. The city-state is one of 40 nations being visited by the carrier strike group led by the flagship aircraft carrier. The weekend’s combat exercises included naval manoeuvres and simulated combat training featuring both F-35B stealth fighters and F-16 jets.

Sharing footage of the vessel coming into dock, the HMS Queen Elizabeth’s Twitter page described the stop as a “logistics visit.”

Speaking to Reuters, Commodore Steve Moorhouse, commander of the strike group, said that a recent review had highlighted the importance of the Indo-Pacific and Britain’s intention to “tilt” its focus eastwards.

“What better way to just show that off in the first instance, with Queen Elizabeth deploying here for her first operational deployment,” he added.

Britain’s renewed focus toward the east comes amid what the UK sees as increasing Chinese assertiveness, notably with regards Taiwan, which Beijing sees as an integral part of its territory.

The UK plans to permanently deploy two warships in the Far East. The UK now has only two aircraft carriers, greatly down from the number it operated 70 years ago. The $4 billion Queen Elizabeth is the largest warship built by the British military.

China also operates two aircraft carriers, while the US sails 11.