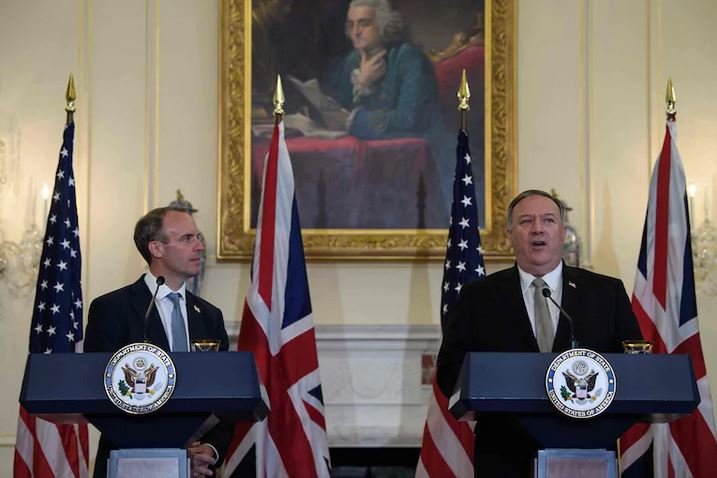 In trying to force the E.U.'s hand for a better trade deal, Britain now appears to have put its U.S. relationship on the line too.

A pandemic distracted some Britons from the looming problems of Brexit, but they were just on the back burner. Even as cases of the novel coronavirus surged in early September, the simmering issues surrounding Britain’s European Union departure returned to a boil, reminding the country that they are not just unresolved — but perhaps unresolvable, too.

Now, Brexit threatens to undermine British Prime Minister Boris Johnson’s efforts to stake out an ambitious new role for a “Global Britain” on the world stage. A key player in that effort, Foreign Secretary Dominic Raab, is in Washington this week, where he told reporters there were issues “from Hong Kong to Libya” to discuss.

Raab’s trip coincides with a resurgence in American interest in Brexit negotiations — or rather, their renewed breakdown. The visit highlights how a globally ambitious Britain remains bogged down in insular Brexit negotiations and under the influence of its oversize transatlantic partner.

Political disagreements over Brexit felled two prime ministers since the 2016 vote to leave, but Johnson initially moved decisively: After winning a large parliamentary majority in December, he secured domestic political backing for an E.U. exit deal.

For much of 2020, Brexit seemed a done deal. Johnson’s battle against the virus, both personal and political, looked to be the biggest threat to his leadership. Then last week, Johnson’s government threatened to override parts of the Brexit withdrawal agreement he himself had negotiated and signed.

It is an unusual move — as one government minister bluntly acknowledged in Parliament, it appears to break international law — and though many interpret the move as simply a hard-line negotiation tactic, designed to push E.U. leaders ahead of a potential trade deal before the end of the year, the implications are bleak.

“Through its own choices, Britain has put itself in such a weakened position that it has finally resorted to either threatening or actually breaking international law to reassert some strength,” the Atlantic’s Tom McTague wrote.

Scorched-earth negotiating tactics aren’t necessarily frowned upon in President Trump’s Washington. But Johnson’s moves have prompted renewed tensions between the British government and other U.S. lawmakers — a potentially pernicious development in an election year.

E.U. leaders argued that the arrangement was necessary to maintain the fragile peace established after the 1998 Good Friday Agreement, a deal that ended the worst violence of the Troubles. But some in Britain worry that it would threaten the link between Northern Ireland and the rest of the country, damaging the integrity of the United Kingdom.

Johnson’s new Internal Markets Bill, proposed this month, would give the British government the power to override part of the Brexit withdrawal deal. Critics argue that this would damage Britain’s reputation as a partner in other international negotiations and potentially lead to the return of a hard border in Ireland.

“We face the prospect of the U.K. flagrantly breaking international law and using Northern Ireland’s position as justification for it,” Queen’s University Belfast professor Katy Hayward told The Washington Post’s Amanda Ferguson and William Booth. “This sets a whole new precedent. And it bodes very badly for peace.”

Awkwardly for Raab, the United States was deeply involved in the Good Friday Agreement, with President Clinton sending then-Sen. George J. Mitchell (D-Maine) to serve as an independent chairman for the discussions, and U.S. lawmakers have chided Johnson and his allies like Raab for putting it at risk.

Last week, House Speaker Nancy Pelosi (D-Calif.) said that ” there will be absolutely no chance of a U.S.-U.K. trade agreement passing the Congress” if the accord was undermined. Rep. Brendan Boyle (D-Pa.) told Britain’s Channel 4 the same day that “absolutely no one” believed the British government’s justifications.

The disparity of a Global Britain and a Britain bogged down by Brexit was on display in Washington this week. During a meeting with Secretary of State Mike Pompeo at the State Department on Wednesday afternoon, Raab spoke about global issues such as China, Iran, Russia and the Middle East peace process.

We can’t allow the Good Friday Agreement that brought peace to Northern Ireland to become a casualty of Brexit.

Any trade deal between the U.S. and U.K. must be contingent upon respect for the Agreement and preventing the return of a hard border. Period. https://t.co/Ecu9jPrcHL

At the State Department, Pompeo had offered cautious support for Johnson’s moves, saying he was “confident they’ll get it right.” But on other significant global issues, most notably Russia and Iran, there is some distance in the special relationship.

Despite the poisoning of Russian dissident Alexei Navalny and the uprising in Belarus, Trump remains muted on the subject of moves against Moscow. Pompeo himself recently condemned Britain and other nations for “siding with the ayatollahs” when they blocked U.S. efforts to reimpose sanctions on Iran.

In fact, Democrats are closer in line with a Global Britain foreign policy (as are many E.U. states). But unlike Trump and his allies, they are skeptical of Brexit and particularly focused on the Irish border issue. It doesn’t seem like Raab can convince them otherwise: After meeting the foreign secretary later on Wednesday, Pelosi put out a statement that again emphasized the Good Friday Agreement.

Dominic Raab has been on the charm offensive in Washington all week calling around members of congress, trying to dispel fears over the GFA. One congressional source the Foreign sec spoke to tells me he was not reassured: "It’s still shocking to me the current U.K. government..

Former British ambassador to the United States Kim Darroch last week said to Today’s WorldView that Johnson’s government likely sees a U.S.-U.K. trade deal as the most important objective in the relationship with Washington, and Johnson had initially assumed that Trump, who favors a deal, would win reelection.

That looks increasingly like a naive bet. A trade deal would have to pass the Pelosi-led House, and there’s little sign Trump views it as a priority. Meanwhile, Biden, who as Darroch noted seems to have more interest in restoring ties with Europe than cutting a deal with London, is leading in national election polls.

Perhaps this is all a negotiation tactic. Less than a year ago, Johnson threatened a “no deal” Brexit after all. But in trying to force the E.U.'s hand for a better trade deal, Britain now appears to have put its U.S. relationship on the line, too. After the huge hit of the pandemic, it’s a gamble on the country’s economic future and the global standing it so cherishes.