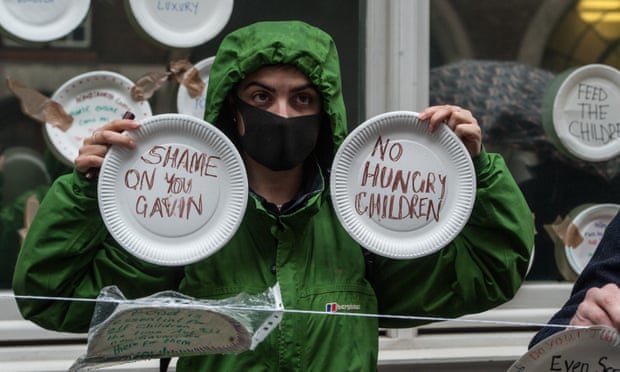 Britain is becoming a GoFundMe nation, with the public doing the government's job

By all means step in to feed children or raise money for the NHS, but never forget that the Tories’ aim is to shrink the state

After the government rejected Marcus Rashford’s latest initiative to extend free school meals, pledges came in from people and businesses across England to do it themselves. In my own London neighbourhood, in Brent, almost every single pub and cafe along the high street posted promises on social media to feed any children in need, discreetly and for an unlimited time.

The whole spontaneous wave of kindness and generosity made the government’s meanness seem even more gratuitous. Here was a cause that galvanised people across the country, resonating with everyone except those whose responsibility it is to care for vulnerable citizens.

This has been the theme of the past year. Obviously unjust, easily fixable policies are brought to the government’s attention with a plea to solve them, only for the request to be turned down, making them into a popular national cause that then forces the government’s hand. Every stage of the pandemic so far has featured a national outrage that followed a rejected appeal: the NHS surcharge, paid parking in hospitals for health service staff, the algorithm’s A-level results, no free school meals throughout the summer.

Boris Johnson emphatically declares the government’s position is not for turning one day, and then grants the request that he had previously asserted was out of the question. The impression is that of a flaky monarch preoccupied with things other than governance. His default position is to refuse any requests; but, once he realises that there is less of a headache in actually granting them, he capitulates.

Over the past year, there has been an extraordinary level of civic activity – lobbying, organising petitions, applying regular pressure in the media and now humiliating the ruling party. And by reaching into its own pockets to feed hungry children, the British public has now become an informal branch of the state.

It would be reasonable to suppose the expansion of our role into funders of services that should be provided by the government is an embarrassment for the Conservative party. Successive government U-turns expose a party that is besieged, haemorrhaging good will and stuck in a loop of bad PR. Even if it gives in on the latest school meals campaign, all that will remain is a bad taste in the mouth. The government’s record will be marked not by its relenting, but by all the headlines around the world about how it was brought to its knees by a young footballer, and a timeline of shame on Rashford’s social media.

But there is another scenario, in which the Tories realise there is a way to outsource state spending to the public and suffer only short-term bad press. Already forced to commit to more public spending than it ever would have contemplated in normal times, the government’s refusal to extend the paltry sums needed to extend the free schools meals programme is not a matter of money but of precedent. If the Tories can establish that the role of government is not in fact to feed children, and the public can do a fine job of it instead, then they kill two birds with one stone. Problems either go away or diminish through the efforts of private individuals, as does the expectation on them to address those problems.

Slowly, a parallel infrastructure has been developing over a decade of austerity, where we are poised to scramble and fulfil the urgent needs of hungry, homeless and sick people through food banks, voluntary immigration support and private donations to the NHS . There is no time to petition the king, who has made it clear that there are bigger matters for the court to attend to, and who tells us that we are doing a fine job of it without wasting the time and resources of government.

It is a common feature of corrupt regimes – when the people resign themselves to the fact that they are on their own, they develop all sorts of coping mechanisms. In my birth country of Sudan, most neighbourhoods fashioned such an efficient system for collecting and disposing of waste that when the government eventually started a trial waste-disposal scheme there was no rubbish to collect.

All the while, the Conservative party can continue to hammer home the theme of fiscal responsibility and to entrench the view that it is the reluctant but determined arbiter between the deserving and undeserving poor, between those who are living on benefits as a lifestyle and those who are in genuine need, between immigrants abusing the system and those who are a useful addition to the British economy.

A new danger is on the horizon – that we become a GoFundMe nation. The Conservatives will look on and hand out honours to those who have galvanised the public to do the government’s work, but maintain their electoral prospects by casting themselves as the bulwark against the hordes of exploiters.

The NHS has already fallen to this readjustment of expectations as it leans ever more heavily on the likes of the knighted “Capt Tom”, private donations and volunteers, cheered on by a government that urges us to leave politics aside and come together as a nation.

We can do both. We will help the NHS. We will feed our neighbours’ children. But we should never forget that it’s not our job to do so.
Add Comment