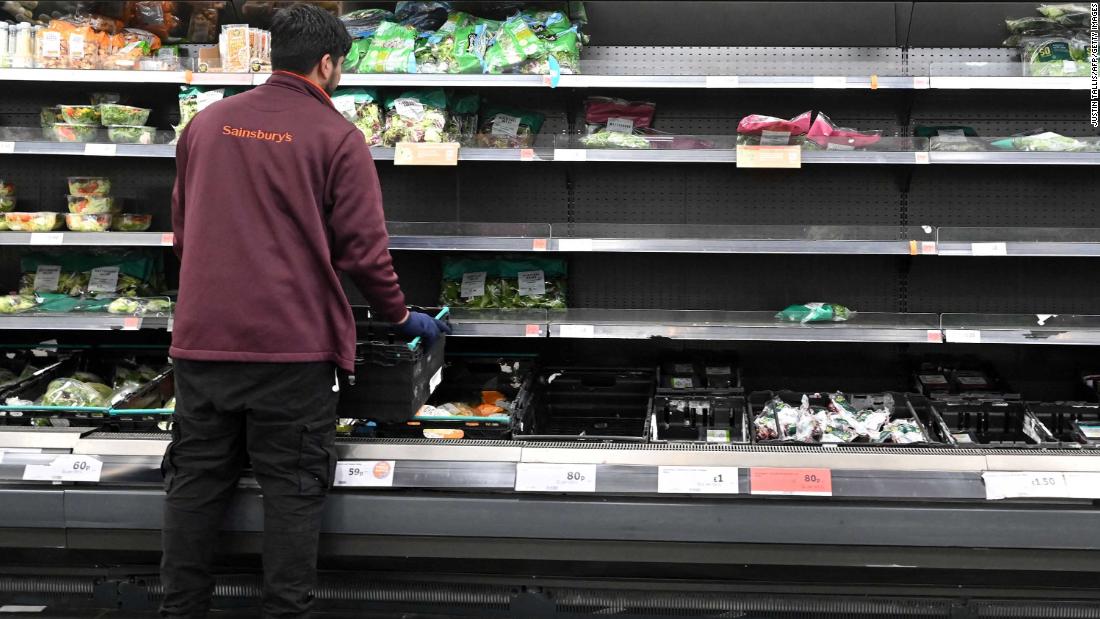 The British government has once again delayed the introduction of checks on imports from the European Union as the food and drink industry warns that shortages caused by Brexit and the coronavirus pandemic could become permanent.

Checks on food products from the European Union have been pushed back by another six months, and will now start in July 2022, Brexit minister David Frost said in a statement on Tuesday. A requirement to notify border staff of food products arriving from Europe that was set to take effect on October 1 has also been delayed to January 2022.

Prime Minister Boris Johnson's government was originally planning to introduce checks on EU imports following the conclusion of the Brexit transition period on January 1, 2021. But it was forced to announce the first postponement last year in the middle of the pandemic to avoid piling on the pain for British business and choking off vital food supplies.

The new delay comes as supermarkets in the United Kingdom struggle to keep their shelves fully stocked amid a supply chain crunch caused by the pandemic and worker shortages that have been partly caused by the country's departure from the European Union. Some EU workers left after Brexit, and farms, food processing factories and trucking companies can no longer recruit from the European Union because of new UK immigration rules.

Retailers are now scrambling to secure supplies needed for sales over the crucial holiday shopping season.

Europe is the most important source of food for Britons, with 30% of all food eaten in the United Kingdom produced there, according to the British Retail Consortium. The country is especially reliant on Europe for fresh food during the winter months.

Following Brexit, the UK government introduced its own system of regulations for human, plant and animal health. The split means both sides now need to conduct "sanitary and phytosanitary" controls at the border — checking specialist paperwork and making some physical inspections — adding new barriers to trade.

"We want businesses to focus on their recovery from the pandemic rather than have to deal with new requirements at the border," Frost said in a statement on Tuesday. "Businesses will now have more time to prepare for these controls."

The food and drink industry blasted the government for the last-minute change, saying it penalizes businesses that prepared for the new import regime on October 1 and rewards companies that ignored official guidance.

"Many food and drink manufacturers will be dismayed by the lateness of this substantial change," Ian Wright, CEO of the Food and Drink Federation, said in a statement: "With just 17 days to go, the rug has been pulled."

The delay also gives EU producers an advantage over UK companies whose products are already subject to full post-Brexit checks when exported to Europe.

Industry groups have blamed worker shortages on a tight labor market and an exodus of EU nationals. The Road Haulage Association says the United Kingdom is short around 100,000 truck drivers, 20,000 of whom are EU nationals that left the country after Brexit.

There were a record 1 million UK job vacancies in June to August, the Office for National Statistics said Tuesday. Many employers have been unable to hire replacement workers from the European Union because of tighter immigration rules brought in by the UK government following Brexit.

Supermarkets and restaurants have been caught in the middle. McDonald's (MCD) was forced to take milkshakes off its menu earlier this summer and Nando's closed 45 restaurants after running out of its signature dish peri peri chicken. Suppliers have warned of further disruption that means Brits may have to go without holiday staples such as turkey and pigs in blankets later this year.

Wright has warned that product shortages could be here to stay. The food and drink industry is short 500,000 workers, he estimates.

"The result of the labor shortages is that the just-in-time system that has sustained supermarkets, convenience stores and restaurants — so the food has arrived on shelf or in the kitchen, just when you need it — is no longer working," he said last week during an event organized by the Institute for Government.

"And I don't think it will work again, I think we will see we are now in for permanent shortages," he said.

The Confederation of British Industry said Tuesday that delaying border checks could help relieve pressure on supply chains ahead of the busy holiday period. But it warned the impact will be "fleeting" unless the problems faced by businesses are addressed.

"Where supply bottlenecks are caused by labor shortages, the UK should use the immigration levers within its gift to alleviate short-term pressures," Sean McGuire, Europe Director at the CBI, said in a statement.
#coronavirus  #boris johnson  #johnson
Add Comment