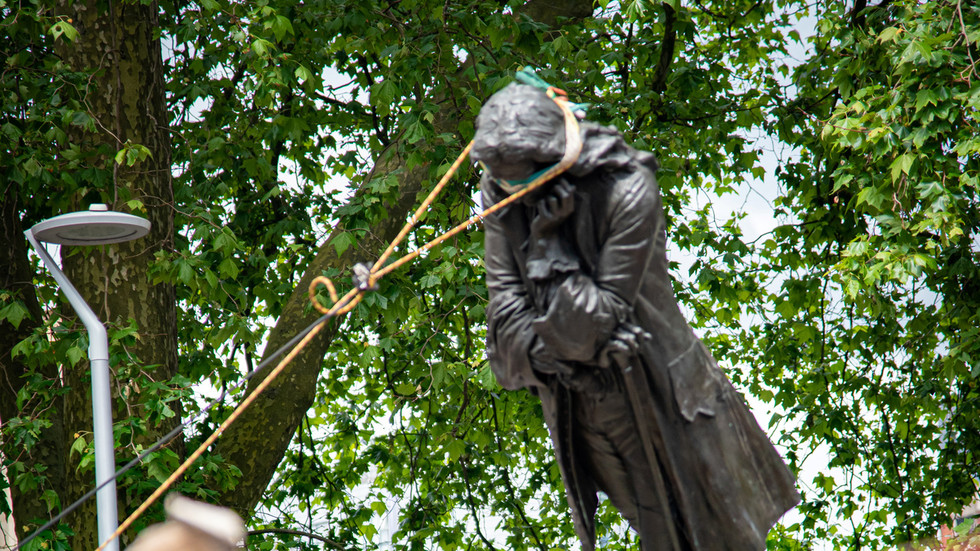 Bristol statue destruction is ‘CULTURAL EVENT OF THE YEAR’? We are in big trouble, Twitter critics say

The UK media has found a cultural outlet to be praised as a masterpiece – destroying statues. While some agree that defacing a monument in Bristol was the best art expression of the year, others say vandalism is not an option.

“Throwing Edward Colston’s statue in the Avon was the cultural event of the year,” art critic Mark Hudson wrote in the Independent on Thursday. Hudson argued that in a year where Britain’s first lockdown closed galleries and theaters and forced audiences to view art and listen to music from their smartphone screens, the toppling of Colston’s statue was a live event, towering above any “internet-based art projects.”

Edward Colston was a 17th Century philanthropist and merchant who funded hospitals and schools in his native Bristol. He was also a slave trader, and as ‘Black Lives Matter’ protests went worldwide this summer after the death of George Floyd in Minneapolis, protesters in Bristol tore his likeness off its plinth and rolled it into the River Avon.

Commenters online were outraged at Hudson’s apparent praise for the statue-topplers in Bristol. “If this was a cultural event,” one wrote, “we are in big trouble, culturally.”

It was Unforgivable
Cultural
Vandalism. https://t.co/4XTwj30U9b

Barbarians have breached the gates. https://t.co/VVnGRSLvqT

Not everyone endorsed a cultural non-profit organization’s tweet comparing the Colston statue case to the atrocities committed by ISIS against Palmyra monuments or by the Taliban in Afghanistan. Still, even those who support the removal of ‘problematic’ statues considered vandalism a step too far.

I care not a whit about colston's statue but disapprove of the method. To compare it to the destruction at Palmyra or Bamiyan is just ridiculous

‘Save Our Statues’ activists are not alone in their criticism, though. When Colston’s statue was pulled down, British politician Nigel Farage controversially compared the Black Lives Matter movement’s actions to the Taliban’s destruction of two-centuries-old statues of Buddha in Afghanistan.

Meanwhile, those endorsing Hudson’s point of view say statues should come down amid the fight against injustice – and actually, Colston deserved to have his monument demolished.

Colston was not the only divisive figure targeted by Black Lives Matter this summer. One day before Colston’s statue came down, protesters in London defaced a monument to Winston Churchill, and vandalized – for a questionable reason – a statue of Abraham Lincoln, the US president responsible for abolishing slavery.

Throughout the UK, protesters called the statues and monuments of colonialist Cecil Rhodes and biologist Charles Darwin to be slated for removal. London Mayor Sadiq Khan set up a commission in June to pore over the capital’s statues, buildings and street names to remove those that “reflect a bygone era.”

None of these moves were praised as art the way Colston’s removal was. Shortly after the Colston statue’s destruction, activists installed a resin figure of a black woman with a raised fist, which was removed by council officials a day later.

The woman who inspired the replacement statue, Jen Reid, has been treated to a profile by local news outlet Bristol Live. The news site described the destruction of Colston’s statue as “a momentous day which shook the world,” and Reid added that she “would do it all over again.”

Winston Churchill, now a target for the woke mob, would likely have taken a dim view of Reid and the statue-destroyers targeting the UK’s history. “To build may have to be the slow and laborious task of years,” he once remarked. “To destroy can be the thoughtless act of a single day.”