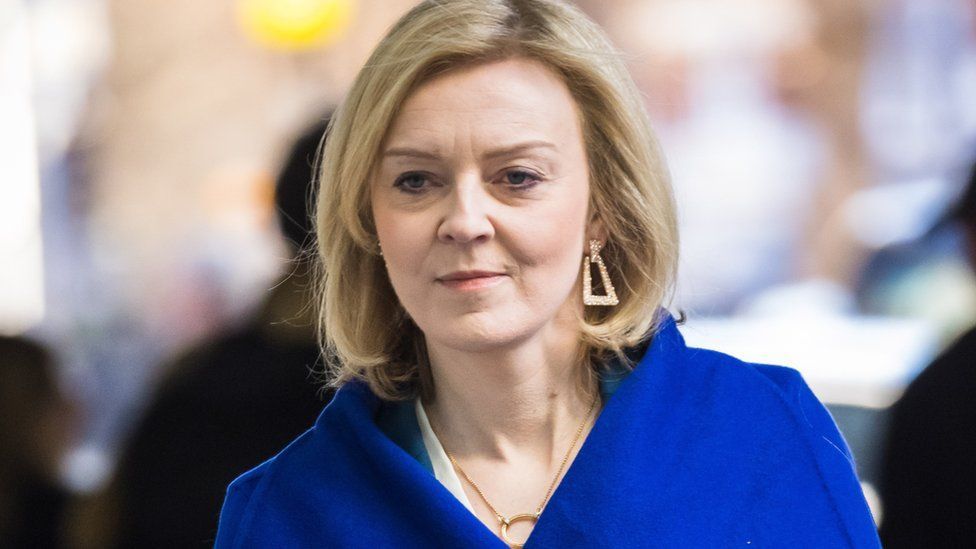 The UK has rejected EU plans aimed at reducing the impact of the post-Brexit treaty for Northern Ireland, saying they would make things worse.

The EU claims the proposals would reduce paperwork and checks on goods entering NI from Great Britain.

But the government says they would "worsen the current trading arrangements".

The UK verdict is part of an escalating dispute which could soon see the government scrapping parts of the deal.

The protocol is an issue under fresh scrutiny following elections to the Northern Ireland Assembly.

The elections cemented a majority for assembly members who accept the protocol, including the new largest party, the republican party Sinn Féin.

But the second largest party, the Democratic Unionist Party (DUP), said it would not nominate ministers to form a new executive in Northern Ireland until its concerns with the protocol were resolved.

Foreign Secretary Liz Truss said, in a statement released on Tuesday night, that her preference had always been for a "negotiated solution" but that she would not shy away from "taking action to stabilise the situation in Northern Ireland if solutions cannot be found".

A source close to Ms Truss said she believed the current situation could not "drag on", with the foreign secretary now eyeing domestic legislation to start scrapping parts of the treaty.

It was agreed between the UK and the EU in 2019, put into domestic law by the UK Parliament and came into force in January 2021.

It works by keeping Northern Ireland inside the EU's single market for goods.

The EU acknowledges that it has caused difficulties for Northern Ireland businesses and its October proposals were an attempt to ease that burden. 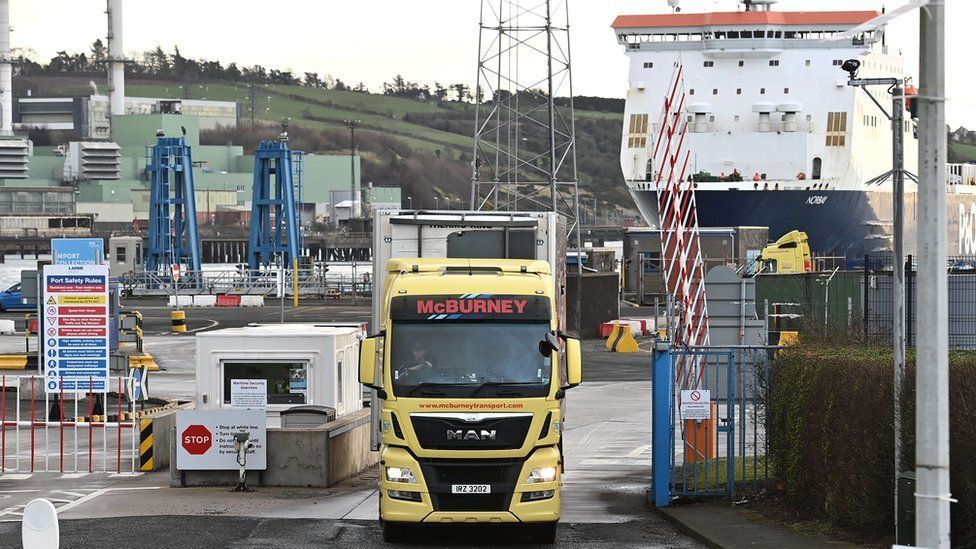 Under the protocol, checks are required on goods coming into Northern Ireland from the rest of the UK

At the time, its chief negotiator, Maroš Šefčovič, said it was a "robust package of creative, practical solutions".

Much of that package concerned food products which are subject to the greatest level of new checks.

The EU said it would mean inspections of food products would be reduced far below what is usually required at single-market borders.

However, the plan came with caveats and the UK said the EU needed to do more.

But this government statement amounts to a public rejection of what the EU was proposing.

It focuses on the fact that grace periods mean the protocol is not being fully implemented.

It says if the grace periods were replaced with the EU proposals, the checks and controls would increase, and these plans would lead to "everyday items disappearing off the shelves".

It claims a range of food would likely be unavailable in Northern Ireland shops if it originates from outside the EU, such as Thai green curry ready meals, New Zealand Lamb and Brazilian pork.

It also claims "sending a parcel to Northern Ireland would require more than 50 fields of information for the customs declaration for one parcel".

Earlier, Mr Šefčovič said that solutions could be found without changing the protocol, and the EU said it was "bending over backwards" to find solutions. 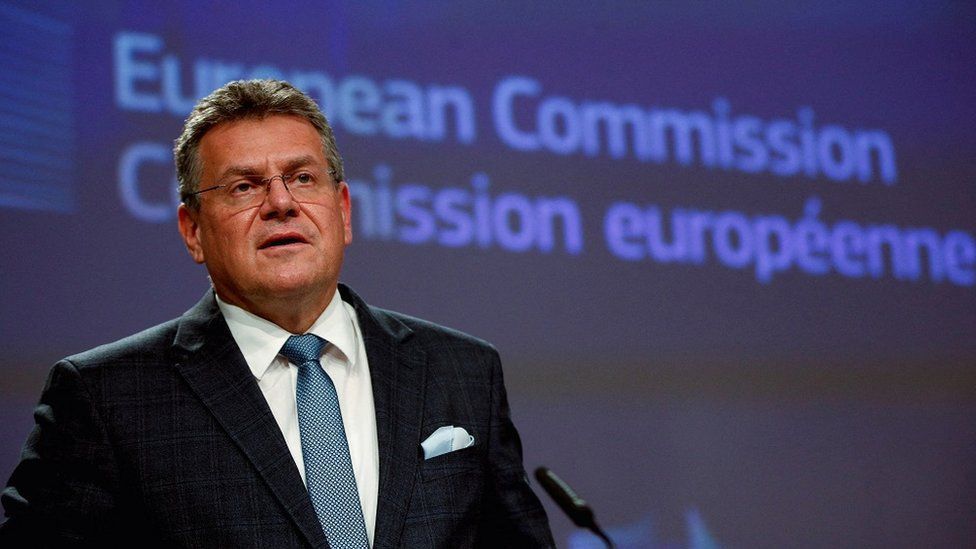 He pointed to how the EU had changed its laws to ensure medicines could be traded freely from Great Britain to Northern Ireland.

He added that with "political will and genuine commitment joint solutions to legitimate practical issues… can be found within the framework of the protocol".

He warned that the protocol, as a cornerstone of the Brexit Withdrawal Agreement, was an international agreement and "it's renegotiation is not an option".

Whitehall sources have suggested that, within government, Ms Truss' position is relatively hard-line.

Former PM Theresa May said it was "not the right move" for the government to take unilateral action involving the protocol.

Previously the UK has threatened to trigger what's known as Article 16.

That is the provision within the protocol that could potentially see parts of the agreement suspended if the treaty is causing "serious economic, societal or environmental difficulties".

A source close to the foreign secretary insisted that her "absolute priority" was protecting peace in Northern Ireland.

"We can't have the current situation drag on. That is why she's prepared to act if solutions can't be found with the EU, who still aren't prepared to show the requisite flexibility despite the seriousness of the issue," they said. 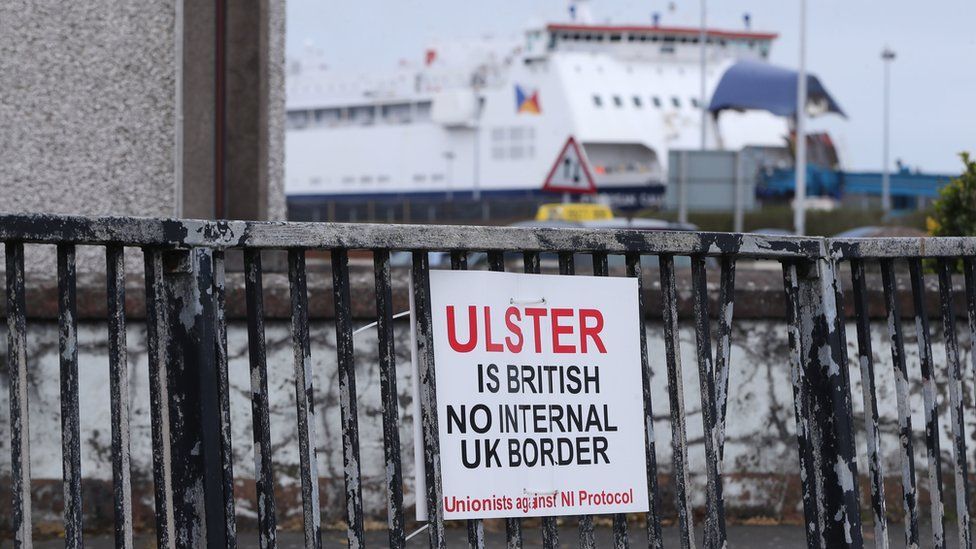 The protocol is opposed by unionists, who argue it undermines Northern Ireland's place in the UK

The UK has demanded fundamental changes to the treaty.

It wants to remove checks entirely on goods destined to stay in Northern Ireland as well as overhaul VAT and governance arrangements.

There is scepticism in Brussels about whether the UK will really push ahead with ditching parts of the protocol.

"From all her meetings with the EU and member states she knows exactly that this is a no-go for all of them," said one EU diplomat.

"So this can only be about catering to a domestic audience."

Another senior diplomat warned that such a move by the UK would only serve to "delight" Russian President Vladimir Putin.

On Monday, Mrs May questioned in Parliament what the move to unilaterally scrap parts of the protocol would say about the UK's "willingness to abide by treaties which it has signed".

And in a rebuke to Democratic Unionist Party (DUP) leader Sir Jeffrey Donaldson, who said the protocol was harming the Good Friday Agreement, Mrs May added: "I put a deal before this house which actually met the requirements of the Good Friday Agreement and actually enabled us not to have a border down the Irish Sea or to have a border between Northern Ireland and the Republic of Ireland.

"Sadly, the DUP, and others across this house, chose to reject that, but it was just such an opportunity."

Mrs May, who stepped down in 2019, had proposed an insurance arrangement designed to avoid a hard border between Northern Ireland and the Republic of Ireland.

It would have kept the UK in a "single customs territory" with the EU, and left Northern Ireland in the EU's single market for goods. 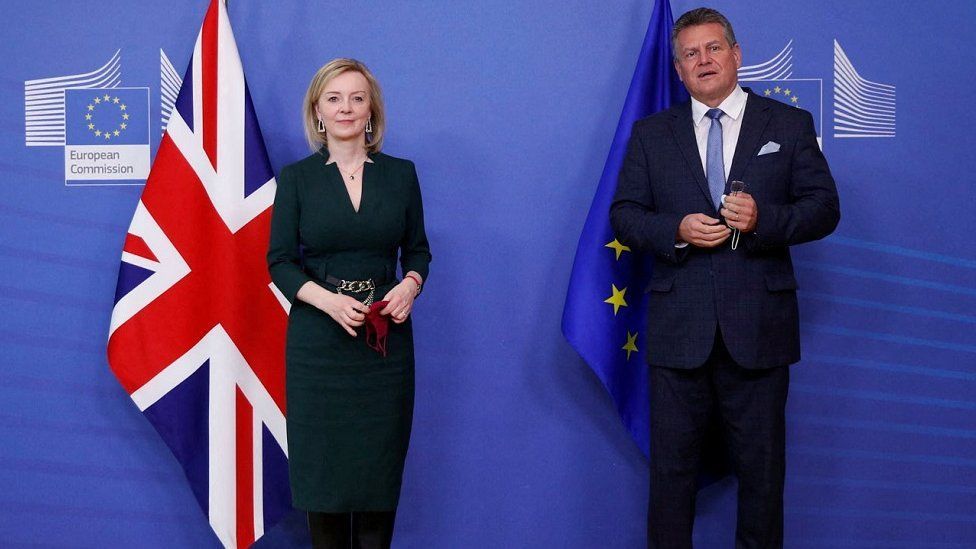 On Tuesday, the European Commission said it wanted to find practical solutions within the boundaries of the treaty, reiterating that its proposals weren't "take it or leave it."

However a spokesman insisted there would be no renegotiation.

Whitehall sources have indicated that there are divisions within the UK cabinet about unilateral moves to start scrapping parts of the protocol, with concerns it could spark a "trade war."

Chancellor Rishi Sunak is understood to have given an "assessment" on the economic implications - a Downing Street source said that the government would act "responsibly" on the issue.

The plan to legislate has also been described as just "an option" in Whitehall that is yet to formally reach cabinet.

Ms Truss was expected to speak with her EU counterpart Mr Šefčovič in the coming days.

Taoiseach (Irish prime minister) Mícheál Martin said he had a "frank and honest" exchange of views in his telephone call with Prime Minister Boris Johnson earlier on Tuesday about the blockages in restoring an executive.

He said what was needed was a proper "intensification" of discussions between London and Brussels regarding the implementation of the protocol.

The taoiseach said he set out in clear terms his "serious concerns" about any unilateral move by London.

"I shared my view that this would be the wrong approach. It would be destabilising in Northern Ireland and would further erode trust," he said.