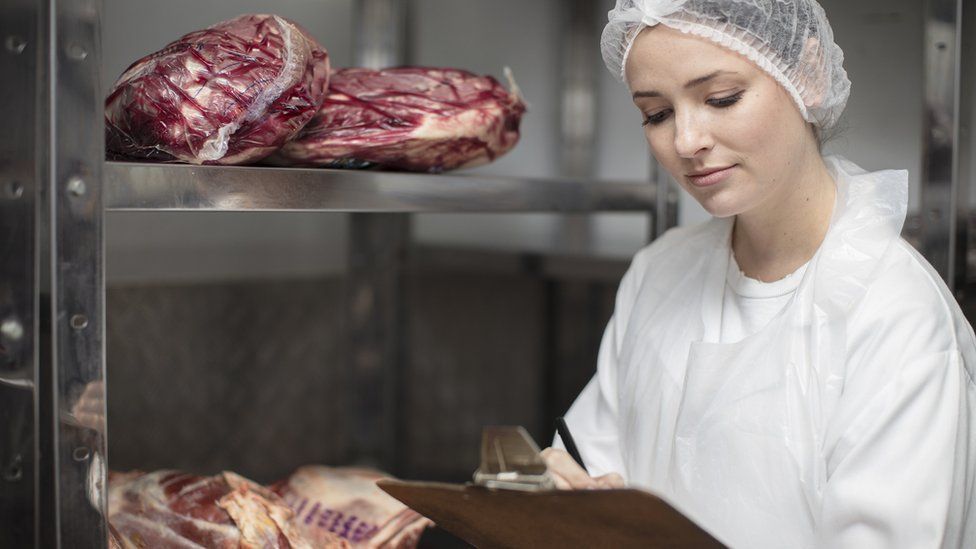 The government has delayed introducing more checks on EU goods entering the UK over fears it will disrupt supply chains and add to rising inflation.

New import controls on EU food products had been due to begin in July.

The government said "it would be wrong to impose new administrative burdens and risk disruption at ports" at a time of higher costs due to the war in Ukraine and rising energy prices.

It is the fourth time it has delayed EU import checks since the UK left the EU.

Brexit opportunities minister Jacob Rees-Mogg said the government was reviewing how it would implement checks on EU goods and "the new controls regime will come into force at the end of 2023".

He claimed that the delay would save British businesses up to £1bn in annual costs.

Mr Rees-Mogg said it would have been "an act of self-harm" if the government had decided to go ahead with the import controls.

He said the checks would have brought "quite significant" price increases for people at a time when the government was "trying to reduce costs."

These would have included a "71% increase - maximum level - on the retail price" of small deliveries like cheese.

He said: "You would have been adding potentially £500 of costs on a shipment of fish fingers, that then falls through to the consumer."

"We are dealing with significant supply chain stress and inflationary costs this year and this would have made a bad situation much worse," said Shane Brennan, chief executive of the Cold Chain Federation.

The Federation of Small Businesses said: "Imposition of full import controls this summer would have meant yet another burden for small firms which are already wrestling with new trade rules and spiralling operating costs."

However, ports, which have spent millions of pounds gearing up for the checks, said they had been "landed with the bill of the government Brexit border U-turn".

They have been building border control posts that would allow checks on imports of EU food and animals.

But those checks have not only been delayed, but may not be needed if a "light touch" regime is brought in, potentially meaning that the new infrastructure will be "useless", the British Ports Association said.

"This announcement is a major policy change, meaning the facilities will effectively become white elephants, wasting millions of pounds of public and private funding, not to mention the huge effort there has been to get things ready in time," the association's chief executive Richard Ballantyne said.

He said ports were looking for "clarification from policy makers if there will be any type of financial assistance or compensation for ports and also if operators can start to bulldozer the facilities and use the sites for other purposes".

The Major Ports Group, which represents major UK ports and freeports, said they had been "working incredibly hard and have invested over £100m of their own money" in new border posts which could be "highly bespoke white elephants".

Meanwhile, the National Farmers' Union (NFU) said the decision was "another blow to farm businesses that are already struggling with enormous inflationary costs and ongoing labour shortages".

"Our producers have to meet stringent controls to export their own products abroad, all while being left at a continued competitive disadvantage to our EU competitors, who are still enjoying an extended grace period which gives them access to the prized UK market relatively cost and burden free," NFU president Minette Batters said.

She added that checks on agricultural food imports were "absolutely critical to the nation's biosecurity, animal health and food safety".

The British Veterinary Association also criticised the move, saying it "flies in the face not only of common sense, but also of the government's commitment to preserving high levels of animal and human health in the UK".

This is more than just yet another delay on the post-Brexit system for imports.

It is, says the government, a significant change of policy that could mean wide-ranging laborious physical checks on food imports from the EU might never be introduced.

Such checks were originally thought to be the inevitable consequence of the distant harder Brexit deal struck by Boris Johnson.

What is certain is that such checks are in the long grass, and that will come as a huge relief to many in the logistics industry and in particular the supermarkets.

The government's plan is that a new digital trade border, applying to the whole world, will be in place at least in trial form by the end of 2023.

This will mean that only a tiny proportion of the physical checks on food imports due to have rolled out from this July will be needed.

For Mr Rees-Mogg, agreeing lower trade barriers than had been planned is good policy.

But it is an about-turn to lower barriers to provide an incentive for the EU to reduce its equivalent stringent checks on UK food exports.

For now, the supermarkets will be happy to avoid what could have been an acute source of further supply chain and inflationary pressure.

But some UK food exporters face the triple whammy of marathon length haulage queues in Kent, dozens of pages of red tape for sales in Europe, and no equivalent restrictions on competition from abroad for the UK market.