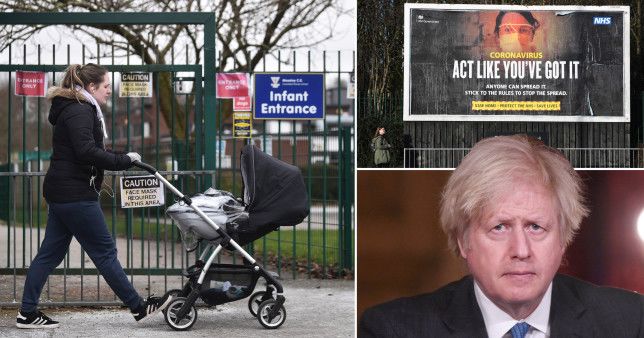 The Prime Minister said he could not make a cast iron guarantee.

Speaking at a coronavirus press briefing on Monday, the Prime Minister would not promise that yet another set of national restrictions could be avoided later in the pandemic.

Asked if he could guarantee there would not be another national lockdown, Mr Johnson said: ‘No, I can’t give that guarantee, of course not, no. We’re battling with nature, with a disease that is capable of mutating and changing.

‘I’m increasingly confident, I’m increasingly optimistic about the sheer extent of the possibilities that are opening up with vaccinations – I’ll be setting out as much of a timetable as we can give on February 22.

‘And I’m very hopeful that we’ll be able to go ahead and open things up.’

The intervention comes after one expert warned that the country was at risk of a another full lockdown if the latest release is mishandled.

England is currently under a third set of national restrictions, which it will only gradually emerge from on March 8 at the very earliest.


The PM, who wants an ‘irreversible’ easing of lockdown, will set out a ‘roadmap’ on the relaxation on Monday, February 22.

The other nations of the UK decide their own restrictions.

But there are fears that easing the rules too early could lead to another spike in infections and further lockdowns – despite the rapid rollout of vaccinations.

This evening, Mr Johnson continued: ‘To say I can give an absolute cast-iron guarantee that we won’t face further difficulties and have to think harder and deeper about some problems. At this stage, I can’t.

‘But I don’t want people to think I’m not optimistic. I think there’s been a big change and the big change is that science is now unquestionably in the ascendancy over the disease – and that’s manifested in all sorts of ways, not just through a vaccination but also with better therapies.’

The PM said the country should be ‘very much encouraged’ by the progress made against the disease.

It comes after an expert warned that a fourth lockdown is a risk if this release is not handled properly.

Professor Stephen Reicher also cautioned that giving dates for when restrictions will be lifted could leave people feeling ‘hopeless and helpless’ if they are not met.

The member of the Scientific Pandemic Insights Group on Behaviours (SPI-B) which advises the Government, said he understands the need to give people notice and the desire to provide hope.

But he warned that things need to be done ‘gradually’ and ‘carefully’, echoing other scientists who have cautioned that lessons must be learned from previous ‘mistakes’ in easing lockdown measures too fast.

‘It certainly seems to be that the priority is to get schools open, we need to make sure that we can make schools open safely before we think of going back to the pub.’

The St Andrews University professor added: ‘If things don’t happen on (given dates) then people begin to be hopeless and helpless. You begin to have a sense of “look, there’s nothing we can do” and that sense of helplessness is very damaging psychologically.’