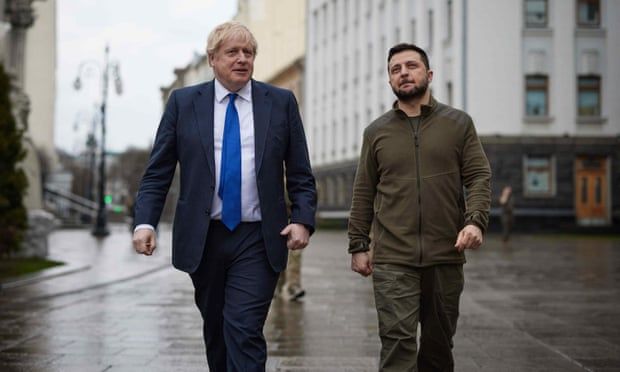 PM to be first world leader to address parliament since war began, as his chancellor faces questions over Infosys

Boris Johnson will hail Ukraine’s resistance against tyranny as an exemplar for the world as he delivers a virtual address to the country’s parliament on Tuesday.

Recalling Britain’s resolve during the second world war, the UK prime minister will say that “we remember our time of greatest peril as our finest hour”. He will say the bravery demonstrated by those who have sought to defend their country from Russian invaders means the war will come to be known as Ukraine’s “finest hour”, too.

The speech to Ukrainian MPs reciprocates the move made by the country’s president, Volodymyr Zelenskiy, who gave a historic speech to the House of Commons in March.

Johnson will become the first world leader to address the Verkhovna Rada since the conflict began, and seek to show critics he is focused on international affairs despite continuing questions over his leadership.

Meanwhile, the chancellor, Rishi Sunak, has faced fresh questions from Labour about why a company his wife holds a stake in, Infosys, is still reportedly operating in Russia despite assurances it would pull out of the country.

The Indian tech company said it would shut its office in Moscow after the invasion of Ukraine and ministers have urged British businesses to cease trading in Russia to help stymie its economy and avoid feeding Vladimir Putin’s war chest.

With Russia attempting to focus its attention on the south and eastern regions of Ukraine after failing to take the capital, Kyiv, Johnson will attempt to provide a morale boost. He will tell the Ukrainian parliament: “When my country faced the threat of invasion during the second world war, our parliament – like yours – continued to meet throughout the conflict, and the British people showed such unity and resolve that we remember our time of greatest peril as our finest hour.

“This is Ukraine’s finest hour, an epic chapter in your national story that will be remembered and recounted for generations to come. Your children and grandchildren will say that Ukrainians taught the world that the brute force of an aggressor counts for nothing against the moral force of a people determined to be free.”

Johnson visited Kyiv last month and other senior western politicians have been to the city recently as well, including the US House of Representatives speaker, Nancy Pelosi.

Sunak was urged by Labour to say when Infosys’s Russian office would close down and if his family was financially benefiting from the company’s continued presence there. His wife, Akshata Murty, holds about a 0.9% share in the company, which was founded by her father.

Tulip Siddiq, the shadow economic secretary to the Treasury, said it was “really important that the chancellor clarifies what is happening here and whether his immediate family is benefiting from Infosys’s continued presence in Russia”.

She added: “We can’t have a situation where a UK chancellor and his family maintain economic interests in the Putin regime.”

A spokesperson for Sunak declined to comment. A spokesperson for Murty said she was “one of many minority shareholders and has no involvement in the operational decisions of the company” and added: “This is a matter for Infosys and should be addressed to them.”

An Infosys spokesperson said: “While the company does not have any active relationships with local Russian enterprises, we have a small team of fewer than 100 employees in Russia, which services some of our global clients. We are currently working closely with those clients that are being impacted to enable a smooth transition.”
#boris johnson  #johnson
Add Comment