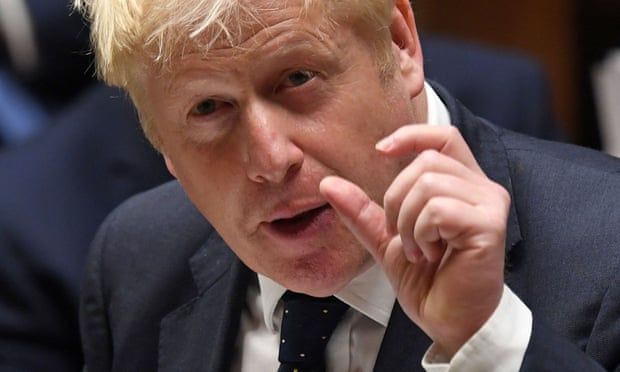 The PM repeats his line ‘But a global pandemic wasn’t in our manifesto, either’ as he announces tax rises

The prime minister, once again, had to level with us. Flanked by his chancellor and health secretary, he kicked off with some truth bombs. NHS waiting lists would get worse before they got better. Social care wouldn’t improve without more money, and that money must come from tax.

It couldn’t come from more borrowing, he implored. Rishi Sunak chimed in later to deepen the point: debt was irresponsible and dishonest. Sajid Javid couldn’t have agreed more strongly. What was the point in hearing from all three of them, one might wonder, when they were all of exactly the same mind while making a very simple point, like Newsround-does-tax?

They need money. They can either borrow it or tax the population and they – with heavy hearts – chose tax. The prime minister had to choose it because that was the chancellor’s plan; the chancellor had to choose it because that’s what the health secretary demanded. They passed the blame quite delicately from each to each, while remaining in compete accord. It was, at times, quite dainty.

There was some dicey logic going on, though, and it didn’t take a genius to rootle it out. This announcement, that national insurance contributions would be going up by 1.25 percentage points and it just couldn’t be helped, relied on the concept of taxation as one amorphous blob.

The Conservatives don’t like tax any more than you do, verily they like it considerably less than you do, which is why they promised in their manifesto never to raise it. “But a global pandemic wasn’t in our manifesto, either,” said the prime minister, clearly cock-a-hoop with this line, which he had already delivered to parliament earlier in the day. To those two certainties of life, death and taxes, we can add a third: the Conservatives will deliver.

The problem is, tax is nothing like a blob; you can tax assets or earnings, individuals or corporations, rentiers or workers, you can tax inheritance or the minimum wage. A government can really do a huge amount of prioritising between one group or generation and another with this varied and flexible instrument.

So, buried within Johnson, Sunak and Javid’s hopeful play – social care had to be paid for, and the only decision they’d made was whether to pay now or pay later – was a very clear statement of priorities.

Most important, to Johnson’s mind, were the “millions, millions [who] live in fear that they could be among the one in seven” whose care costs exceed £100,000. To pacify these millions and millions, costs will be capped at £86,000 once the new system of social care is in place in 2023.

But millions and millions live in fear that they won’t make rent, or be able to turn the heating on, or feed themselves. It’s quite a peculiar order of business, to hike up taxes on someone earning £20,000 in order to allay the hypothetical health anxieties of a statistically minded asset holder who is terrified of losing their 100 grand.

This detail was not lost on any of the journalists, who came in again and again to ask why – Laura Kuenssberg went first – the cost would be “overwhelmingly borne by working people while the expensive properties of wealthy pensioners are protected”. She threw the PM a bone, at least, by acknowledging the dividend tax, also going up 1.25 percentage points and falling on assets. Still, she concluded, “people who have wages and no assets are the ones who will pay, here”.

At this point, the prime minister’s brain went rogue. “Every family in this country faces this risk. Everybody needs our wonderful NHS. Everybody has an aunt or a friend.” And so the hierarchy of citizens slowly took shape: at the top, the ones who were worried about their houses; next, people who have aunts, or friends; third – a hat tip here for Sunak, who never stops thinking about the future – the as-yet-unborn worker, who shouldn’t have to mop up debts we incur today. Then, at the very bottom, regular people with salaries that they’re trying to live on.

“The Institute for official Fiscal Studies themselves said today that this is a progressive and broad based measure”, Johnson reiterated, which is weird, since the IFS pointed out immediately that working age people on £28,000 will now be paying almost twice as much in assorted taxes as a pensioner on the same income. It doesn’t sound that progressive, unless “progressive” is like the ace in a deck of cards for alternative economists: it can be high or low, progressively better or progressively worse.

What they always say about national insurance – apart from how crazy it is, to have a tax sliding downwards, so that people earning more than £50,000 pay a lower rate – is that you can put it up and nobody will notice. It’s like boiling a frog: if you put the working-age taxpayer in cold, they won’t feel the temperature rise until they’re already unconscious. Something about the press reception, however, tells me that the frogs have got wise.
#boris johnson  #johnson
Add Comment