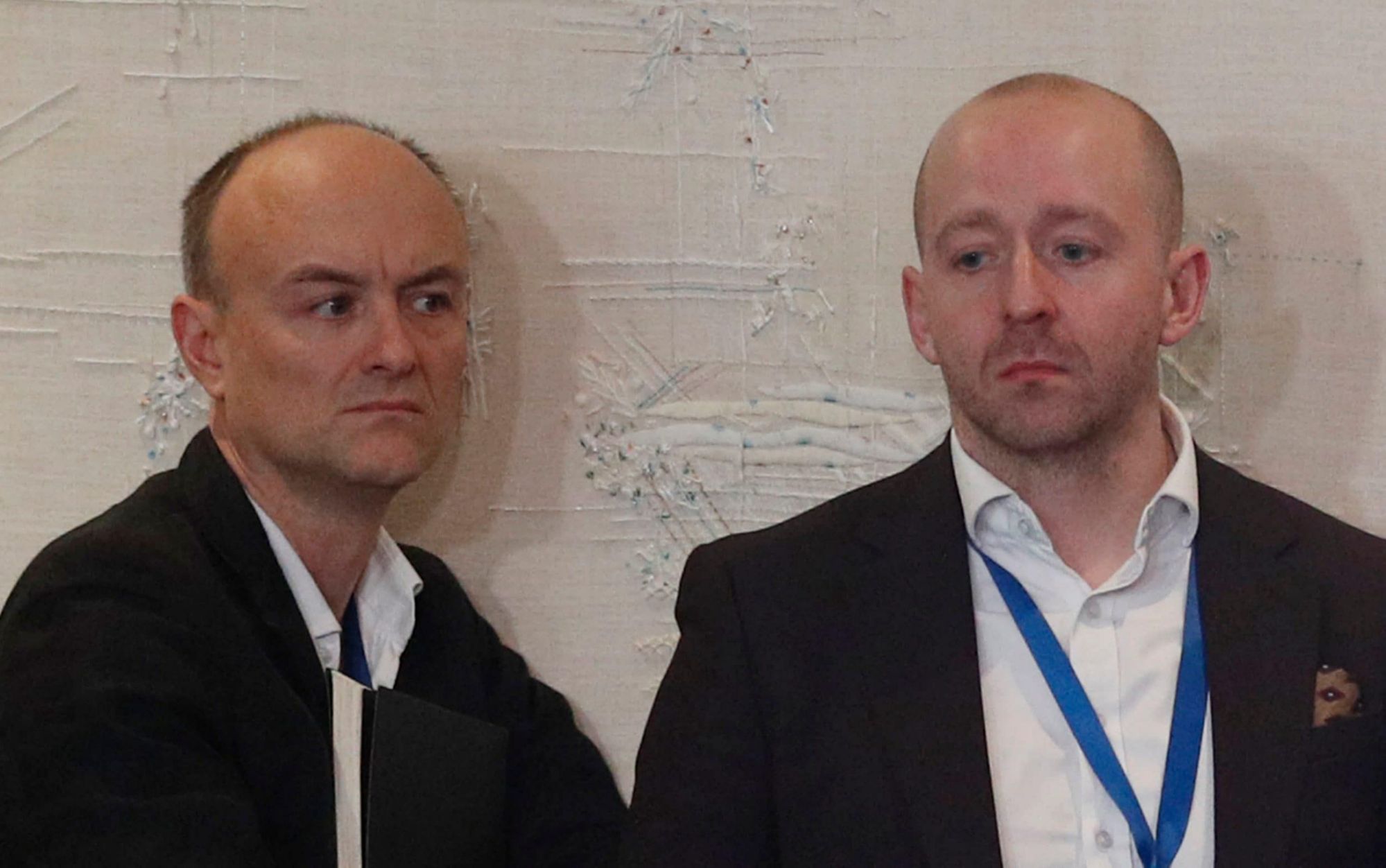 Boris Johnson was trying to prevent an exodus of Downing Street staff on Wednesday night after a key aide resigned following a public power struggle with the Prime Minister's fiancée Carrie Symonds.

Dominic Cummings, Mr Johnson's most senior adviser, was understood to be considering his position following the departure of his former Vote Leave ally Lee Cain as Mr Johnson's director of communications.

Mr Cain's resignation prompted frantic late night scenes in No 10 as staff were tasked with ringing colleagues to gauge how many of them might quit if Mr Cummings followed Mr Cain out of the door.

It came after reports that Mr Cummings had confronted the Prime Minister in Downing Street after Mr Cain announced he would be leaving at the end of the year.

There were even fears that members of the Prime Minister's Brexit negotiation team, including policy adviser Oliver Lewis, could quit in protest. 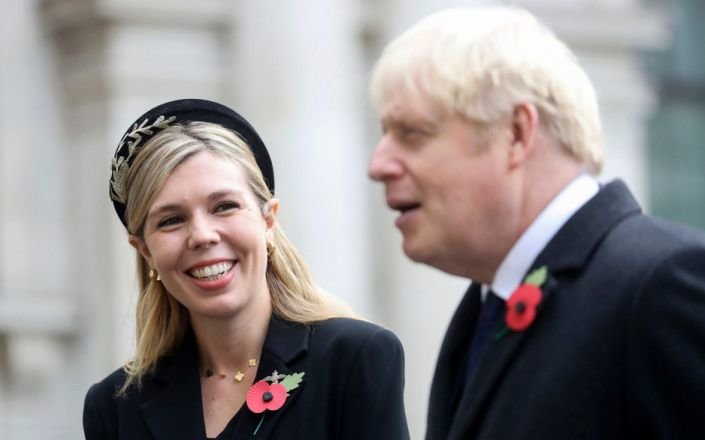 It came after an extraordinary briefing battle between allies of Ms Symonds and allies of Mr Cain, who include Mr Cummings, exposed a civil war at the heart of No 10.

The departure of Mr Cain, who will leave his post at the end of the year, is likely to diminish the influence of his fellow Vote Leave veteran Mr Cummings, who was considering his own position on Wednesday night, according to allies.

One said: "Dom is considering walking. The PM has asked aides to find out how many others, particularly Vote Leave veterans in No 10, will go if Dom does. They are doing a frantic ring-round to find out where people stand."

Mr Cain and Mr Cummings, two of the four most senior aides in the Prime Minister's office, emerged as the losers in a high-stakes gamble against Ms Symonds and Allegra Stratton, who will become the face of Downing Street when it begins daily televised press conferences, who had also objected to Mr Cain's appointment. 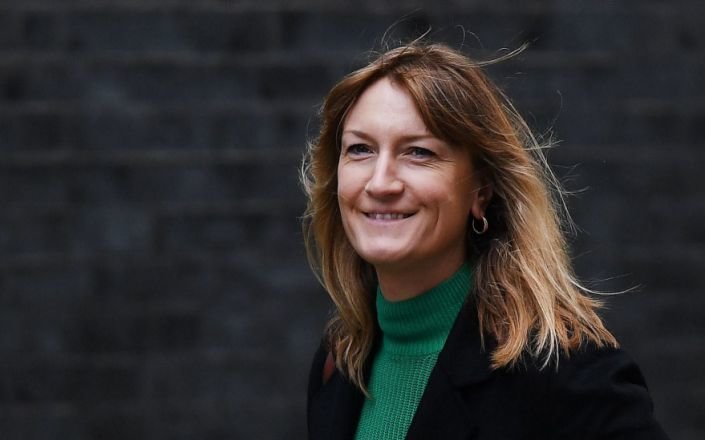 Tory MPs expressed "despair" about Downing Street in-fighting at a time of national crisis, with Mr Johnson facing having to pick sides between two of No 10's most important women and his most senior aides.

Rishi Sunak, the Chancellor, made his own intervention by telling backbench MPs they had a "higher duty to the people of this nation" and that the public are "relying on us" to get them through the pandemic.

The comments at a meeting of the 1922 Committee were seen by MPs as an instruction to focus on their jobs rather than becoming distracted by events in No 10.

On Wednesday night, senior backbenchers urged Mr Johnson to use the crisis to "reset" his Downing Street operation by appointing an experienced party figure who could build bridges with the parliamentary party.

On a day of high drama in No 10, Ms Symonds led a revolt against Mr Cain's promotion by making it known that she objected to him becoming the Prime Minister's right-hand man.

Allies of Ms Symonds said she was "uncomfortable" with the appointment, questioning Mr Cain's suitability for the role.

Ms Stratton, who would have reported to Mr Cain in his new job, is also understood to have objected, with both women expressing unhappiness about Mr Cain's at times abrasive manner and questioning the communications strategy under his leadership.

But on Wednesday night, Mr Cain said that "after careful consideration I have this evening resigned as No 10 director of communications and will leave the post at the end of the year".

He confirmed he had been offered the post of chief of staff, saying it had been an "honour" to have been asked to serve in the role.

Mr Johnson, meanwhile, described him as "a true ally and friend" who would be "much missed".

Mr Cain will be replaced by James Slack, the Prime Minister's official spokesman, who has served both Mr Johnson and Theresa May in the Civil Service post.

Mr Johnson had approached Mr Cain at the weekend to discuss his appointment as chief of staff, only for Ms Symonds to raise objections, insiders said. A promotion for Mr Cain would have ensured that Mr Cummings's authority was not challenged by a new face in the Prime Minister's office. Instead, Tory MPs were on Wednesday night calling on Mr Johnson to start afresh with his top team.

Sir Charles Walker, a vice-chairman of the 1922 Committee, said: "The PM has got to put this crisis to good use and get someone into 10 Downing Street who backbenchers know and respect, and will have the Prime Minister's and party's interests entirely at heart."

It was claimed that Lord Udny-Lister, Mr Johnson's chief strategic adviser, is to leave in January. The peer, 71, had been expected to leave for a while.

Senior Tories were Wednesday night urging Mr Johnson to appoint David Canzini, a close ally of Sir Lynton Crosby who helped to run Mr Johnson's leadership campaign, to the role. Mr Cain's resignation will increase the influence of Ms Symonds and Ms Stratton, who only moved over to No 10 last month after serving as the Chancellor's communications chief. 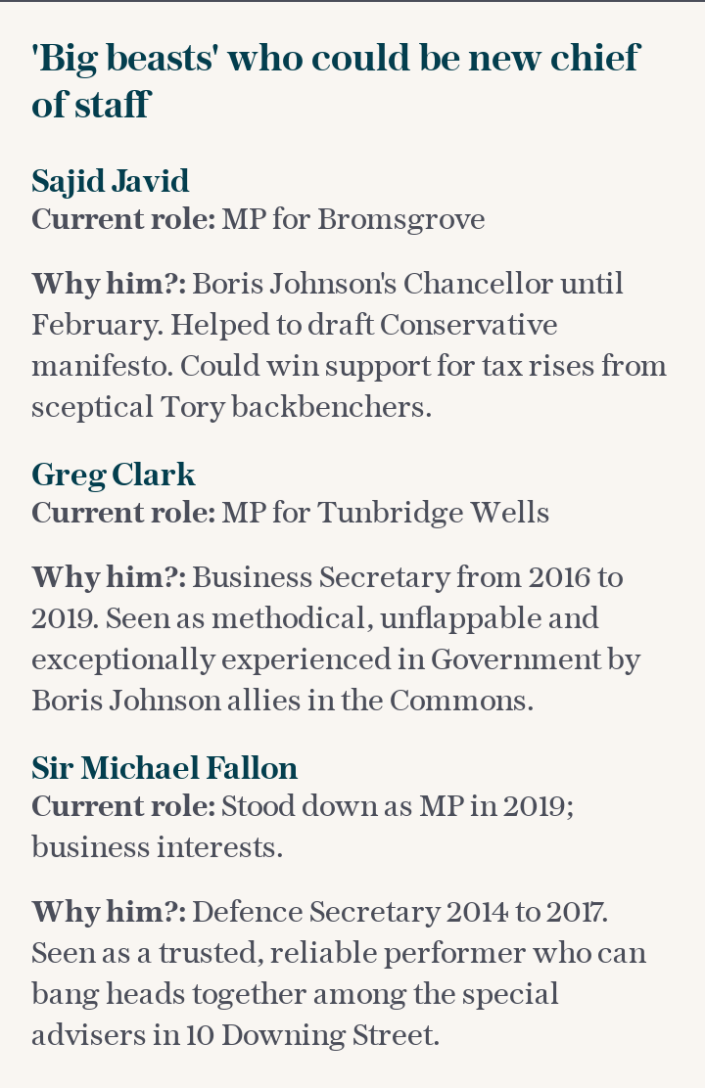 They were understood to be unhappy with the prospect of Mr Johnson's top team, which also includes Simon Case, the Cabinet Secretary, being all-male.

Mr Johnson was already under pressure from senior Tory MPs to appoint a party grandee to become his chief of staff.

Mr Cain is understood to have offered his resignation from his current role last week, complaining that if Ms Stratton became the face of No 10 and a new chief of staff was appointed he would be squeezed out. Mr Johnson then discussed with him the idea of a promotion.

One source who has been close to Mr Johnson said that they suspected Ms Symonds had identified her preferred candidate for the job, saying: "She won't be taking this quietly... She will have someone in mind."

Allies of Mr Cain defended his record and said he would have been the right choice. One said: "When Boris was in hospital and Dominic Cummings was laid up in Durham with coronavirus, Lee was left running the show."

Mr Cain and Ms Symonds are understood to have fallen out when she posted photographs of her and Mr Johnson on her Instagram account without telling him in June last year.