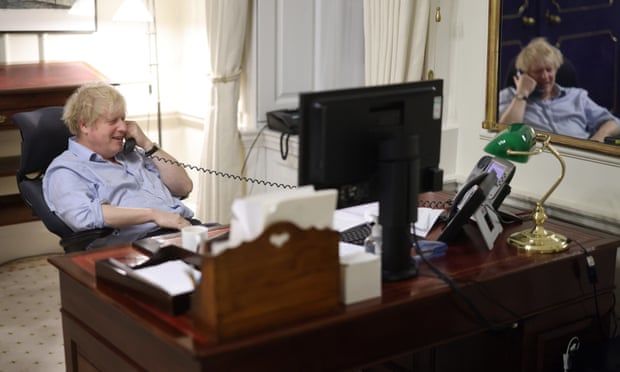 Boris Johnson prefers not to use term ‘special relationship’, says No 10

It is a phrase credited to Winston Churchill – and the state of it has been a source of endless anxiety for a string of prime ministers. But not, it seems, for Boris Johnson.

Downing Street confirmed on Monday that he is not a fan of the term “special relationship” as a way of describing the UK’s friendship with its most powerful ally.

The disclosure, which came a day after Joe Biden used the phrase and three days before Johnson welcomes the US president ahead of the G7 summit in Cornwall, was based on a suggestion that Johnson saw it as “needy and weak”.

Johnson’s spokesperson confirmed his dim view of the phrase on Monday after being questioned about an opinion attributed to the prime minister in a new profile in the Atlantic.

The article cited an unnamed prime ministerial aide saying that in an early call with Biden, Johnson said he did not appreciate “special relationship”, used by the US president, because to Johnson it seemed needy and weak.

Johnson’s spokesperson said: “The prime minister is on the record previously saying he prefers not to use the phrase, but that in no way detracts from the importance with which we regard our relationship with the US, our closest ally.”

The term appears to date back to Churchill, who used it in a 1946 lecture tour of US universities, basing the idea on both countries’ ties of culture and language, and their role in the emerging face-off with Soviet-led eastern Europe.

Numerous prime ministers and presidents have used it since, but as the UK’s global status and power have declined, it has often been seen as one more important to politicians in London, if often happily indulged by friendly counterparts in Washington.

Biden, Johnson and leaders from the other G7 countries will gather from Friday in the Cornish resort of Carbis Bay. The US president will see the Queen at Windsor Castle on Sunday.

Biden has taken pains to use the phrase in advance of his trip. In an article for the Washington Post published on Sunday, Biden wrote: “In the United Kingdom, after meeting with Prime Minister Boris Johnson to affirm the special relationship between our nations, I will participate in the G7 summit.” His official schedule used near-identical words to describe a pre-G7 meeting with Johnson in London on Thursday.

Leslie Vinjamuri, head of the US and the Americas programme for the Chatham House foreign affairs thinktank, said this was to be expected. “American presidents do talk about the special relationship when they turn up in Britain,” she said.

“I think they’re sincere, but they don’t spend a lot of time thinking about it, and nor does anybody in Washington. For better or worse, the conversation is pretty much exclusively driven by Britain. To be fair, America is just in a different league in terms of size and scale, so this is not surprising.”

The relative peripherality of the UK in global terms was “maybe worse now because of Brexit, because Britain is seen as being so internally focused and struggling on multiple dimensions”, Vinjamuri said, while stressing that US leaders still saw London as a key partner in Europe, albeit less so than the likes of Germany.

But Biden also has his own reasons to reach out, Vinjamuri said. “America has also been on the back foot globally, and it’s time to turn a page. As somebody said, this is the ‘America’s back’ tour. Biden really does want to leverage the G7, and the UK is at the helm. So I do think it’s meaningful. It’s not just a song and a dance.”
#joe biden  #boris johnson
Add Comment