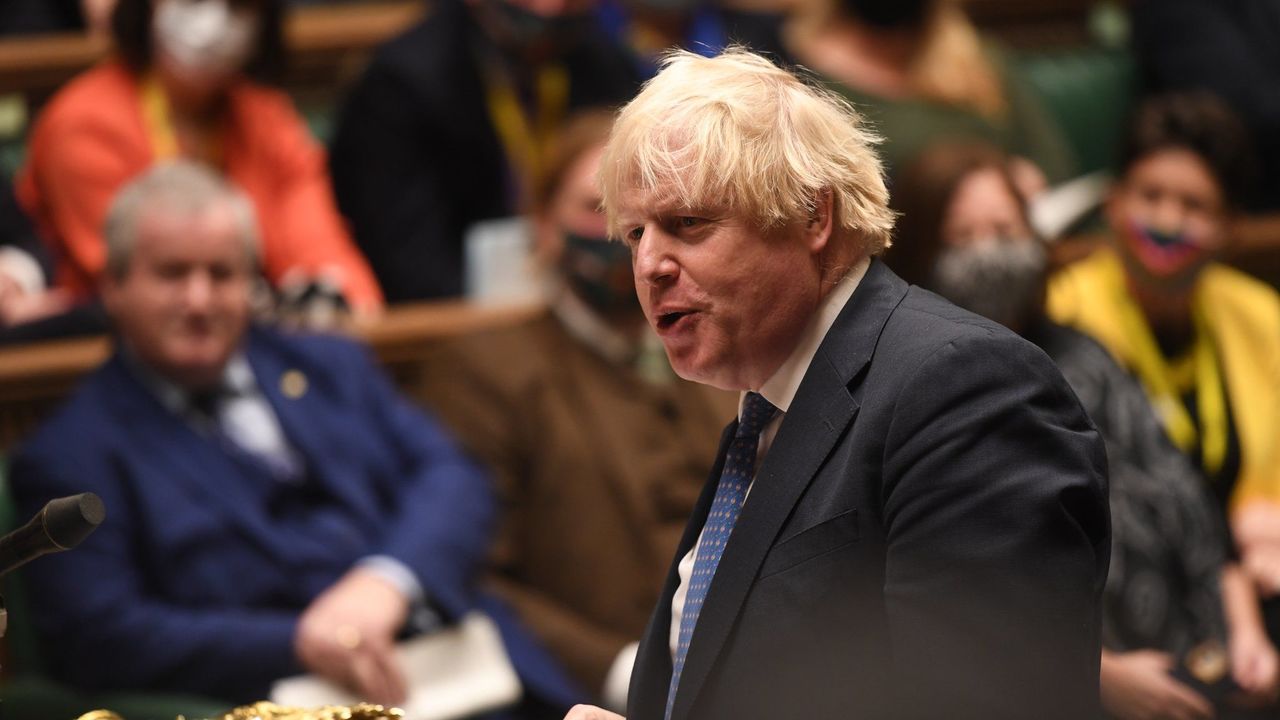 Boris Johnson batted away opposition calls for him to stand down and defended himself against accusations of "broken promises" at PMQs.

Picking up on reports of Tory disquiet after the PM's chaotic speech to business leaders, he asked: "Is everything OK, prime minister?"

The PM said the government was "delivering for...working people".

The Conservative benches were packed for the exchanges, in contrast to last week's session.

"I see they have turned up this week prime minister," said Sir Keir, prompting uproar on all sides and an intervention from Speaker Sir Lindsay Hoyle, who ordered MPs to calm down.

Several MPs have told the BBC that they were urged by party managers, via text or phone call, to attend Prime Minister's Questions to support Mr Johnson.

Sir Keir repeatedly claimed the government's plans for social care funding broke a Conservative manifesto pledge that nobody would have to sell their home to pay for care.

"He's picked the pockets of working people to protect the estates of the wealthiest," said the Labour leader, adding: "How could he have devised a working class dementia tax?"

Mr Johnson said homes will not be included in the cap on costs, adding that Labour did not have a plan to solve the problem.

The prime minister said the government's "huge investment" in health and social care meant people will be able to insure themselves against the "catastrophic cost" of suffering from diseases such as dementia.

Sir Keir also accused Mr Johnson of breaking a promise not to raise taxes - and to deliver a "rail revolution" in the North of England, despite now cancelling the northern leg of HS2.

"Who knows if he'll make it to the next election, but if he does, how can he expect anyone to take his promises seriously?," asked the Labour leader.

Mr Johnson insisted there would be a rail revolution, and claimed the government was spending £96bn on upgrading links.

And he said Sir Keir had campaigned against HS2 - which runs through his Holborn and St Pancras constituency - adding that he had backed the new high speed rail link even though it affected his own constituents, because it was in the national interest.

"How can they trust that man?" he asked.

Johnson not yet derailed

Talk of ousting the PM seems fanciful. He has a track record of bouncing back from adversity.

But it is worth noting that loud cheers from a leader's own side does not mean that underlying concerns have evaporated.

The former Conservative leader, Sir Iain Duncan Smith, was greeted by regular, co-ordinated standing ovations at his party conference, but that didn't prevent MPs quietly but definitively submitting letters of no confidence.

The mood at the moment though seems to be for the current Conservative leader to get a grip rather than to get out.

While Mr Johnson was on the back foot at PMQs, he nonetheless managed to step up attacks on the Labour leader too - the most effective of which was to suggest that HS2 would never have been built at all if Sir Keir Starmer had got his way.

Boris Johnson's premiership has looked juddery recently, but hasn't yet been derailed.

The SNP's Westminster Leader, Ian Blackford, also seized on reports of Tory disquiet with the PM's recent performance, accusing him of "floundering in failure" and asking him if he had "considered calling it a day".

"In the real world, people are suffering a Tory cost of living crisis, Brexit is hitting the economy hard, but the prime minister can't even give a coherent speech to business leaders," he added.

He asked why Mr Johnson was "clinging on when he quite clearly isn't up to the job".

The prime minister said the British public wanted to hear less about politics and more about what the government is doing "for the people of Scotland".

He said there was a "steeliness" to the prime minister, adding: "We work as a team", and he dismissed the criticism as Westminster "tittle tattle".

Mr Johnson appeared before the CBI conference earlier this week to make his pitch for a "green industrial revolution" to business, including support for electric cars, investing in wind power and the government's integrated rail plan.

But it drew more negative attention after his impression of a car and his personal anecdote from a trip to Peppa Pig World.

"I was a bit hazy about what I would find at Peppa Pig World, but I loved it," he told the conference. "Peppa Pig World is very much my kind of place.

"It has very safe streets, discipline in schools, a heavy emphasis on mass transit systems I noticed, even if they are a bit stereotypical about Daddy Pig."

Asked after the speech, "is everything OK?", Mr Johnson said he thought people had "got the vast majority of the points" he wanted to make and that the speech "went over well".

It comes after a few weeks of turbulence at Westminster.

The PM backed attempts to overhaul the standards system for MPs' conduct, blocking the suspension of Tory MP Owen Paterson - who had been found to have broken lobbying rules.

No 10 performed a U-turn on the move following a furious backlash from MPs, including some Conservatives.

But the fall-out led to accusations about sleaze, and wider questions about MPs' second jobs.

The PM came under further pressure this week over the cost cap element of his social care plan, which charities warned could unfairly hit people with fewer assets.

MPs backed the proposals, but it was only a narrow victory for Mr Johnson thanks to a significant Tory rebellion.