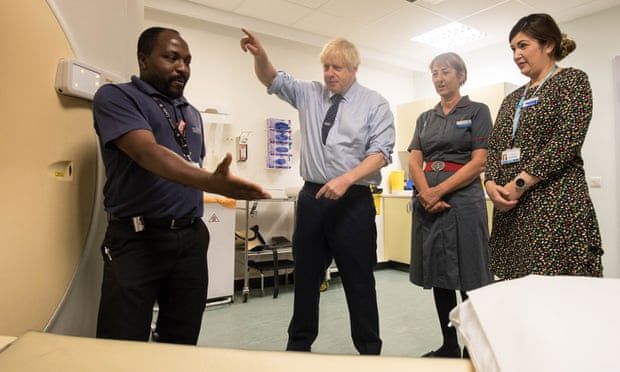 Labour has accused Boris Johnson of a “chilling” disregard for the outcome of treatments for cancer patients.

The shadow health secretary, Jonathan Ashworth, said Johnson had no interest in “levelling up” health outcomes after he suggested wage growth was a more important measure of the success of his keynote policy.

In a BBC interview on Friday before the Conservative party conference, the prime minister was challenged that there was no measure for determining whether those who were more deprived were really catching up with those who were better off under the policy.

“Wage growth is now being experienced faster by those on lower incomes. It hasn’t happened for 10 years or more. That is what I mean by levelling up.”

Ashworth said that if cancer incidence and survival rates among the poorest matched the wealthier, there would be 19,000 fewer deaths each year.

“Boris Johnson starts his conference with the most chilling words ever spoken from a prime minister, dismissing the importance of cancer outcomes,” Ashworth said.

“Life expectancy has stalled for those in the poorest areas. There is no levelling up without levelling up health.

“It’s now clearer than ever that all Boris Johnson offers is just glib words and no action.”

The shadow child poverty secretary, Wes Streeting, who recently recovered from kidney cancer, tweeted: “‘Never mind cancer outcomes,’ I do, as it happens. So do millions of others. This is stomach-turning, insightful and outrageous.”
#boris johnson  #johnson
Add Comment