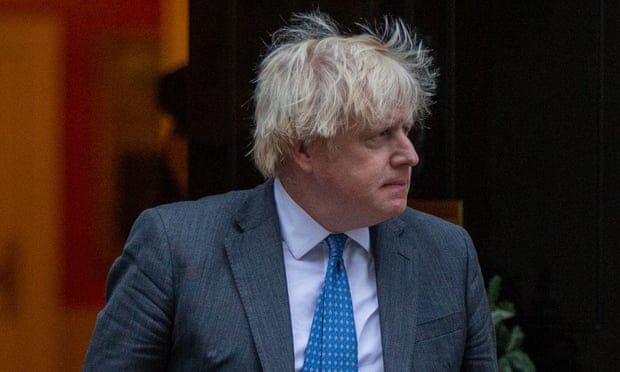 Boris Johnson has been accused of corruption after it emerged that he sought funds for his flat refurbishment from a Conservative donor while promising to consider plans for a mystery “great exhibition”.

The prime minister is facing fresh questions after newly published WhatsApp messages with the Tory peer David Brownlow show Johnson called parts of his Downing Street residence a “tip” and asked for “approvals” so his decor designer, Lulu Lytle, could “get on with it” in November 2020.

He signed off the message by saying: “Ps am on the great exhibition plan Will revert.” Lord Brownlow replied: “Of course, get Lulu to call me and we’ll get it sorted ASAP! Thanks for thinking about GE2.”

On Thursday, Johnson was forced to make a “humble and sincere” apology for the texts not being given to his independent ethics adviser during an initial inquiry last spring.

The first Great Exhibition was held in Hyde Park in 1851. Plans for a “Great Exhibition 2.0” were discussed by Brownlow and the then culture secretary, Oliver Dowden, weeks after the WhatsApp exchanges, official records show.

Several events similar to a “Great Exhibition 2.0” have been considered by the government. Originally conceived by Theresa May’s administration as a “Festival of Brexit”, then “Festival 2022”, the government-backed £120m event was given the green light by Johnson and will go ahead this year under the name “Unboxed”.

Angela Rayner, Labour’s deputy leader, said it appeared Brownlow had access to Johnson and Dowden “because he was paying” for the refurbishments. She said if true, it would constitute “corruption, plain and simple”, and added: “No one should be able to buy access or exchange wallpaper for festivals.”

The Liberal Democrats’ chief whip, Wendy Chamberlain, said: “It stinks of the worst kind of Conservative cronyism, with Boris Johnson seemingly happy to scratch his lord donor’s back to get his flat spruced up in return.”

The WhatsApp messages were published as part of letters exchanged by Johnson and his independent ethics adviser, Christopher Geidt. For a second time, Lord Geidt found that the prime minister did not break the ministerial code over the payments for the Downing Street flat refurbishment, but Johnson was criticised for acting “unwisely”.

The prime minister apologised for the texts not being handed to Geidt last spring, saying he had not remembered them and did not have access to his phone due to “security issues” – thought to relate to when his mobile number was discovered online.

In thinly veiled frustration, Geidt said the saga “shook my confidence” and added that if he had seen the evidence when writing his first report, he may not have ruled that Johnson tried to make the correct declaration and seek advice at the first opportunity.

While Johnson initially told Geidt he did not know Brownlow was funding £58,000 of renovations to the No 11 residence until “immediately prior to media reports”, the full details of the prime minister’s direct request for funds were published on Thursday.

The WhatsApp messages revealed an “intimacy” between Johnson and Brownlow, said Sir Alistair Graham, a former chair of the committee on standards in public life. He told the Guardian: “It shows he was well aware of what was going on in Downing Street. It raises the question about how Johnson wouldn’t have known he was providing real cash for the refurbishment.

“It would certainly provide an incentive for his idea, getting close to the prime minister in order to get it off the ground, by helping him with his refurbishment. It adds to the unsavoury nature of the whole exercise.”

No 10 denied there was anything untoward about Brownlow’s meeting with Dowden and stressed the peer had acted with integrity since first being approached to chair the Downing Street trust. A spokesperson said it was normal for ministers to meet stakeholders and hear proposals put to them, adding: “In line with normal practice this idea was referred to the relevant department, considered and ultimately not taken forward by the government.”

Hi David
I am afraid parts of our flat are still a bit of a tip and am keen to allow Lulu Lytle to get on with it. Can I possibly ask her to get in touch with you for approvals ?
Many thanks and all best
Boris
Ps am on the great exhibition plan Will revert.

Afternoon Prime Minister, I hope you’re both well
Sorry for the delay I was out for a walk and didn’t have my ‘work’ phone with me.
Of course, get Lulu to call me and we’ll get it sorted ASAP !
Thanks for thinking about GE2
Best wishes David

I should have said, as the Trust isn’t set up yet (will be in January) approval is a doddle as it’s only me and I know where the £ will come from, so as soon as Lulu calls we can crack on – David