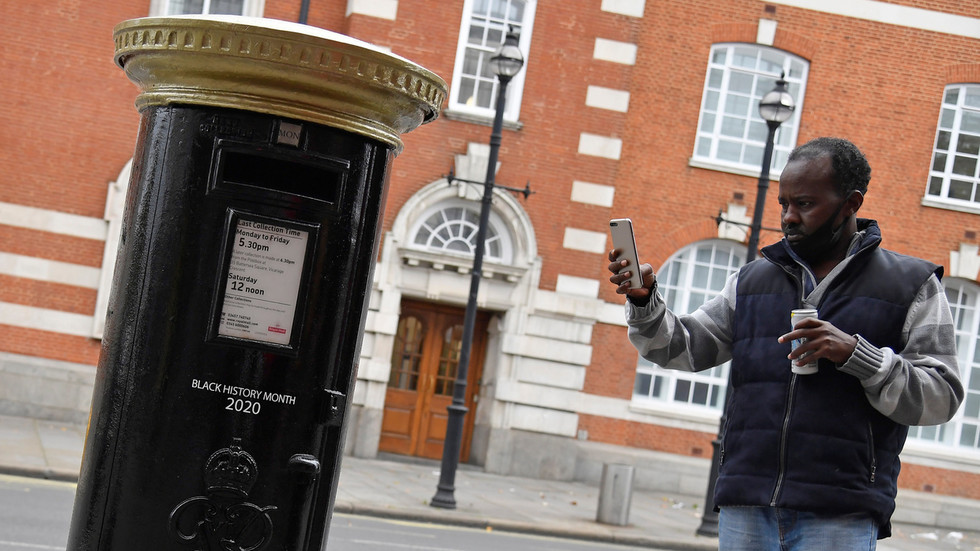 The UK’s Black History Month only serves to underline black people’s second-class status. Its bipolar balancing act between celebration and disdain mirrors the country’s anxiety about itself.

With Black History Month now under way in the UK – an institution imported wholesale from the USA – this country’s sad, low-stakes racial politics are more sharply in focus than usual.

So far the national soul-searching about its colonial history and the lasting impact of African slavery has included impassioned arguments about the painting black of four – just four – of Britain’s traditionally red postboxes, and a boycott of the Sainsbury’s supermarket chain by the cop-show sidekick turned nativist preacher, Laurence Fox.

He objects to the company supporting the month with a programme that involves ‘mentoring circles, awareness days, learning sessions and celebrations’ – but there’s nothing, of course, as remotely useful to its black customers as, say, a discount on their shopping.

In America, black people are at the heart of the nation’s origin story, having arrived alongside the earliest European settlers. Their descendants have a stronger claim to be wholly American than those of the Italians, Irish, Russians and countless others who migrated there in their wake – overwhelmingly since the turn of the 20th century.

African-American culture has a strong case for being regarded as the only truly American tradition with a language, musicology and aesthetic unique to the country, before its export across the planet. Many argue that jazz is the nation’s classical music, with the likes of John Coltrane and Miles Davis venerated as the creators of a truly original and American high-art form.

Black History Month is thus, in the US, the necessary correction to the sidelining of one of the country’s oldest and most vital communities, celebrating figures of such varied and central importance as Muhammad Ali, Toni Morrison and Frederick Douglass.

In Britain, as with every challenge posed by the modern world, the issue of multiculturalism has been addressed with a weak Stockholm Syndrome mimicry of America, irrespective of any differences in histories. With substantial black migration to the UK occurring only since the 1950s, the UK version of Black History Month has a far smaller pool of figures to draw on, their contributions necessarily limited to those possible in a country suffering a steep post-imperial decline.

Thus Britain’s first black train driver, policeman, and first semi-famous, albeit unfunny, TV comedian are held up as pioneering giants of the black British experience, resulting in what, for some black people here, feels like a systematic month of humiliation.

Celebrating black people for engaging in humdrum activities that white people had long been doing in great numbers seems “more like White Supremacy Month” says one black British writer who wishes to not be named due to fear of reprisals.

He regards the state-sponsored celebration as “just more scraps from the table” from an establishment that will never meaningfully address the inherited social and economic trauma that black Britons endure to this day. “The contempt of these people is hysterical. Tax-breaks would be more beneficial for us, or even just free travel for the month.”

Instead, this country opts for the cheapest and most condescending option: a Black History Month that only underlines the second-class status of black people and scrupulously avoids promoting any contentious figures. And white reactionaries still rabidly oppose it, and any other minor effort to seek justice for the descendants of those who were shipped from Africa in conditions unfit for cattle, and then worked and flogged to death to enrich the great estates of England.

The snide offending of black people is one of the few ways that racists here can sustain any illusion of superiority, and ‘gas-lighting’ is the preferred technique: denying the disadvantages and prejudices black people face while claiming to support ‘togetherness’ and social unity.

But the biggest act of gas-lighting the British inflict on their immigrants, of all colours, is their ludicrous and incessant claim to be a great people whose immigrants should be eternally grateful to belong among.

Now that immigrants and their offspring often outperform the indigenous population in every sphere from sport to business, pop-culture and academia, the fantasy the British have of themselves as uniquely gifted is over. London’s colonisation by foreign money and talent underscores this, showing the British up as the first people to be ethnically cleansed from their own capital without a gun pointed at them, let alone fired.

The impotent rage at this expresses itself most vividly in the antagonising of the most economically vulnerable minority in society: the descendants of Caribbean slaves. Indeed, the fury Meghan Markle incites for using the British monarchy as a stepping-stone towards Hollywood fame is just outrage at a black woman who refuses to know her place.

Foreigners have always come to the UK and treated its institutions with outright contempt in pursuit of their self-interest. The Australian, Rupert Murdoch, traduced politicians and retarded the national psyche with tabloid trash in order to then establish himself in America. He, however, is worshipped by the Right here – but then he is, of course, white.

The most interesting thing about Britain’s relationship with its black people – a bipolar swinging between celebration and disdain – is how it reveals the enormous confusion, anxiety and disappointment the country feels towards itself.
Add Comment