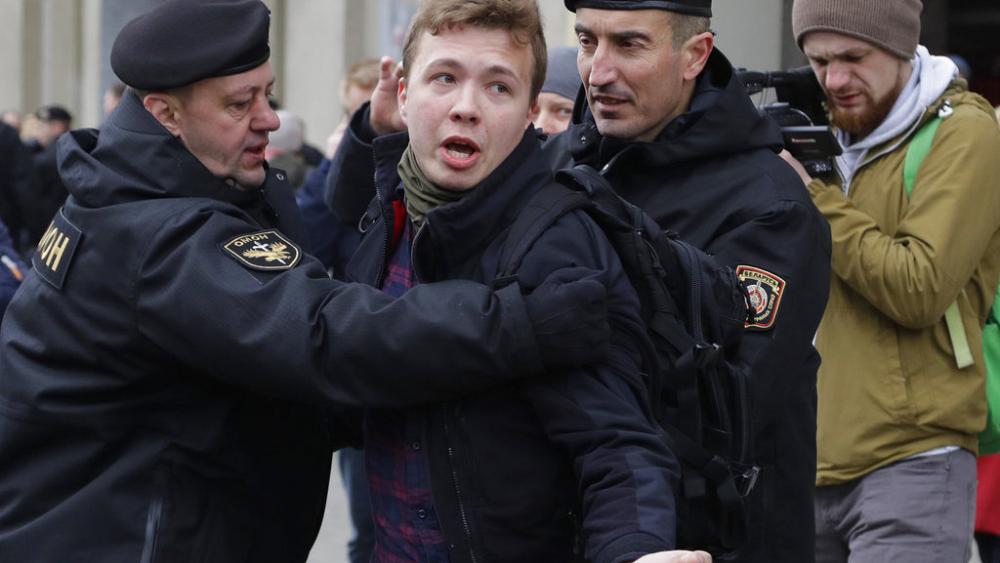 Bid to rename EU streets with a Belarusian embassy after journalist

If enacted, it would likely mean Belarus' embassies having Roman Protasevich Street on all their correspondence.

EU countries are being urged to join a campaign taking root in Romania's capital to rename streets outside Belarusian embassies after the dissident journalist Roman Protasevich.

Protasevich was arrested on Sunday after his Ryanair flight from Greece to Lithuania was diverted to Minsk.

Belarus says it was due to a security threat but critics claim it was a ruse to detain Protasevich and silence critics of the country's long-time president Alexander Lukashenko.

In a bid to show opposition to the move, a campaign began in Bucharest to rename streets hosting a Belarus embassy after Protasevich.

Now, in a letter addressed to EU leaders, eight MEPs, led by Romanian Dacian Ciolos, chairman of the Renew Europe group and MEP Ramona Strugariu, a member of the Committee on Civil Liberties, Justice and Home Affairs, urged countries to follow Bucharest's lead.

The campaign was initially put forward by University of Bucharest professor, Andrei Oisteanu, and is now being championed by Clotilde Armand, mayor of Bucharest’s first district, where the Belarusian embassy is located.

If enacted, it would likely mean Belarus' embassies having Roman Protasevich Street on all their correspondence.

Speaking with Euronews on Friday, Armand said she believed renaming the street outside Belarus's embassy would send a clear message to Lukashenko's regime that "human rights abuses" will not be tolerated by the international community.

"It is a peaceful way to express...our protest and our solidarity," said the mayor.

Armand said she is already putting forward a proposal to change the name of the street outside the Belarusian embassy to "Roman Protasevich Street".

If all goes according to plan, she said, the street name could be changed within a month's time.

The effort still needs city approval. However, Armand said that changing the street name outside the embassy could prove easier than usual, given that it is not a residential street.

"It is usually difficult to change names of streets because you have many citizens living on those streets and they protest as they don't want to have their identity cards changed," she said.

However, Armand said, in this case "when I checked, I realised this is something that is feasible because you don't have anybody living there".

The idea to push other EU member states to do the same came from MEP Ramona Strugariu, who told Euronews she was inspired when she heard of Armand's campaign.

"I saw her initiative and I said, well, this is a great idea and we should take it to the next level, so what if we literally write to all of the member states with a call to support this idea with their mayors of their capitals, in a gesture of solidarity with a very powerful message," she said.

"It was born from the civil society and then it gained momentum everywhere," she said, praising Oisteanu for originally coming up with the idea.

The message the initiative would send, Strugariu said, "is simple: Freedom".

Honouring Protasevich, she said would send "the message that we truly care about his life and the lives of all of the people subject to oppression in Belarus. This strong message that is sent this way also could contribute to saving [others'] lives and empowering people to continue their fight for freedom."

Armand said she is "very happy" to see the initiative gain support from members of the European Parliament.

"I am very happy that my colleagues from Renew have adopted this point of view as well," she said.

"It is a peaceful way of protesting and it is something that can have an impact because...every day [Belarus will be] reminded of what they have done," Armand said.

Euronews has contacted the Belarusian embassy in Romania for comment.

Despite widespread condemnation from the international community, Lukashenko has remained defiant over Protasevich's arrest.

Addressing parliament on Wednesday, he appeared to double down on claims that Sunday's Ryanair flight diversion had been forced out of concerns of a potential bomb threat, asserting that his regime had only sought to protect people.

The claim has been largely dismissed, however, with leaders around the world accusing Belarus of having plotted the ruse to arrest Protasevich.

On Thursday, the dissident journalist's parents pleaded for the international community to do more to stop Lukashenko's "evil" tactics and help free their son.