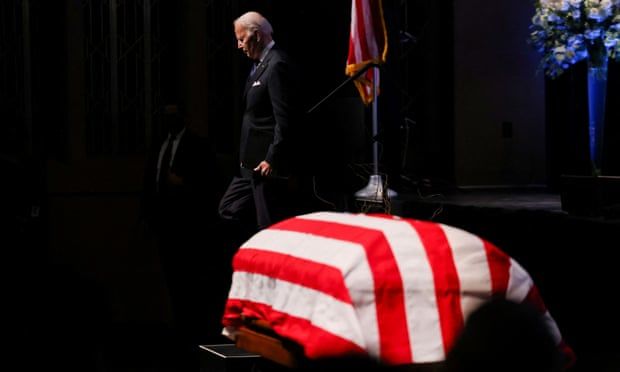 ‘Being tough, being a fighter’: Obama and Biden salute Harry Reid at Las Vegas funeral

Two presidents, Pelosi and Schumer address service in Nevada for former Senate majority leader who died at 82 in December

Two presidents and Democratic leaders in Congress joined on Saturday to commemorate Harry Reid, the former Senate majority leader who rose from poverty in Nevada to become one of the most powerful US politicians.
“Being tough, being a fighter was once

of Harry’s signatures characteristics,” Barack Obama said, at the service in Las Vegas.

“He didn’t believe in high-falutin’ theories or rigid ideologies. Harry knew who he was. In a town obsessed with appearance, Harry had a vanity deficit. He didn’t like phonies. He didn’t like grandstanding.”

Reid died on 28 December at home in Henderson, Nevada, at 82 and of complications from pancreatic cancer. He served for 34 years in Washington, leading the Senate through the great recession and a Republican resurgence after the 2010 elections.

His work to push Obama’s signature healthcare act through the Senate was prominent among memories expressed at his funeral.

Obama credits Reid for helping his rapid rise from the Senate to the White House. He delivered the eulogy.

“He was more generous to me than I had any right to expect,” he said. “He was one of the first people to encourage me to run for president believing that, despite my youth, despite my an experience, despite fact that I was African American, I can actually win. At the time, that made one of us.” 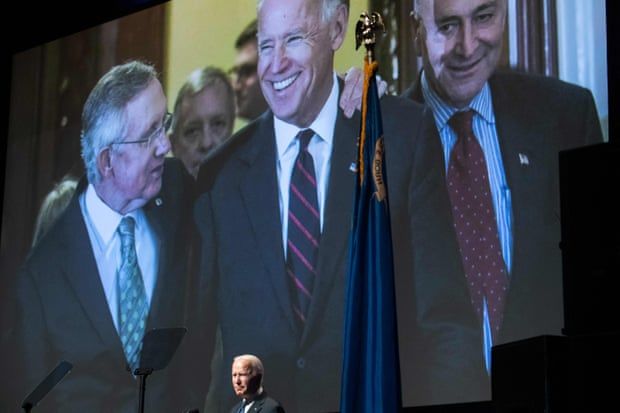 Joe Biden speaks in front of a picture of himself with Reid, left, and Chuck Schumer.

The turnout at the memorial service testified to Reid’s impact on some of the most consequential legislation of the 21st century.

“Harry would always have your back, like the kids I grew up with in Scranton,” Biden said. “His story was unmistakably American. He was proof that there is nothing ordinary about America, and that Americans can do anything given half a chance.”

For Reid, Biden said, politics wasn’t about power for its own sake. It was about “power do right by people”.

“That’s why you wanted Harry in your corner,” he said.

Biden also worked with Reid for eight years after the senator from Delaware became vice-president to Obama.

On Saturday, Biden spoke of his own decision to run for president in 2016, repeating themes outlined when he declared his campaign to oust Donald Trump from the White House and again last week, on the first anniversary of the Capitol attack.

“The idea of America itself is under attack,” he said, “from dark and deepening forces. We’re in a battle for the soul America.”

Reid’s son, Leif, recalled his father’s well-known habit of abruptly ending telephone conversations without saying goodbye, sometimes leaving the other person – whether a powerful politician or a close family member – talking for several minutes before they realized Reid was gone. 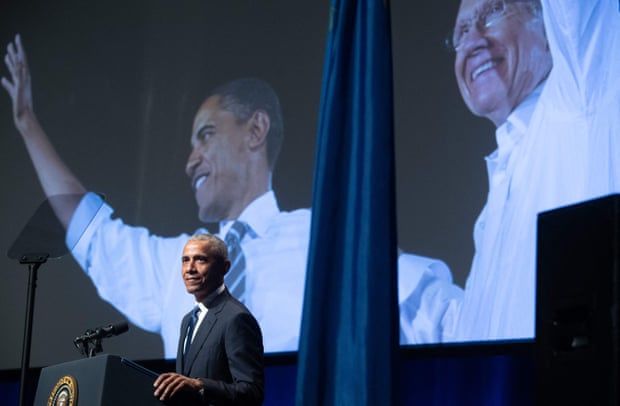 Barack Obama speaks, in front of a picture of him with Reid in 2008.

In a letter to Reid before his death, Obama recalled their close relationship, their different backgrounds and Reid’s climb from an impoverished former gold mining town in the Mojave desert to leadership in Congress.

“Not bad for a skinny, poor kid from Searchlight,” Obama wrote. “I wouldn’t have been president had it not been for your encouragement and support, and I wouldn’t have got most of what I got done without your skill and determination.”

On Saturday, Obama spoke most clearly of Reid’s contribution to democratic principles.

”He understood we don’t have to see eye to eye on everything in order to live together and be decent toward each other,” he said. “That we can learn to bridge differences of background, race and religion.

“He knew that our system of government isn’t based on demanding that everybody think exactly the same way.”

In what almost amounted to a requiem for a vanished political era, Obama said Reid presumed to live in a big and diverse country and for people to still work together.

“He may have been a proud Democratic partisan,” he said, “and he didn’t shy away from bare-knuckle politics. But what is true is that I never heard Harry speak of politics as if it was some unbending battle between good and evil.”