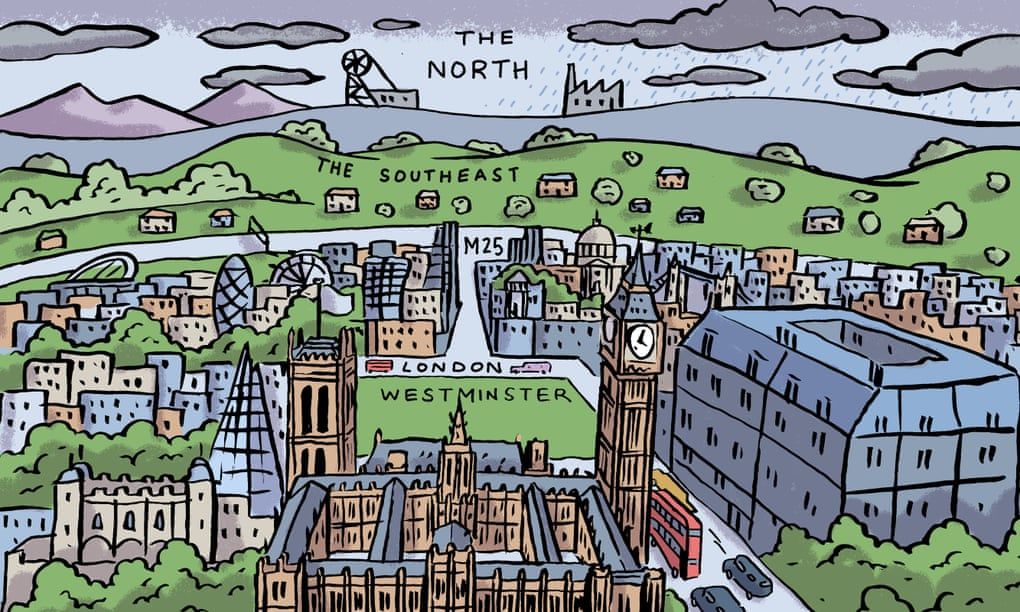 Being betrayed is nothing new for the north. But that won’t lessen the blow

Tackling the historical regional inequalities demands an effort akin to German reunification. ‘Levelling up’ was never more than rhetorical

In the long run, among the greatest electoral perils facing Boris Johnson may well be the anger of those in the north of England who mistook him for a serious politician. Because expecting to be let down doesn’t make the experience of being let down any less painful or the resentment any less severe. The anger stems from the fact people in the north fully understand that their regions do not find themselves left behind, as if by an act of nature, but have been actively left behind. One of the many places where that fact has for too long been visible is on the map of the nation’s railways.

Travelling by rail between any two cities in England is usually quick and easy, but only if one of those cities is London. Manchester to London, a distance of 163 miles (262 km) as the crow flies, takes a little over two hours by train. Leeds to London (169 miles) can be done in about the same time. But Manchester to Leeds, a straight distance of just 36 miles, takes more than an hour and on some routes requires changing trains. London’s dominance is not simply reflected on our rail maps and timetables, it is reinforced by them.

This in turn is a reflection of the form the nation’s private railways took when they first emerged in the 19th century, but also of generations of political and economic neglect. In the north, that neglect, when it comes to infrastructure and much else, has unsurprisingly incubated a justifiable sense of grievance and a deep mood of scepticism.

When the government’s integrated rail plan was announced last week, with the East Midlands to Leeds HS2 line cancelled and the Northern Powerhouse Rail (NPR) project significantly scaled back, the overriding sentiment expressed by the people who appeared in vox pops from the streets of Leeds, Bradford, Hull and other northern towns was not betrayal but a total lack of surprise at having been betrayed.

This stems not from some innate “grim up north” negativity or the supposed sense of victimhood that Johnson toxically accused the people of Liverpool of “wallowing in”. Rather, it is a clear-eyed and sober assessment of current circumstances and recent history. People in the north expect to be let down and “left behind” by Westminster because for so long they have been.

While the neglect of the north has never been only about infrastructure, it is in the provision of roads and rail and the money to pay for them that the disparities and the unfairness are often at their most stark. In 2011, the Institute for Public Policy Research found that not only did Londoners receive more spending per head on transport than people in any other English region, but the disparity was so enormous that London received more spending than all the other regions put together. While spending for each Londoner stood at £2,731 per person, in the north-east, a region that HS2 and NPR never even sought to reach even before the latest cutbacks, spending per head was just £5.

Although jumbled together in last week’s announcements, HS2 and NPR are two very different schemes with different histories. They also mean something quite different to people in northern England. In the north, as in the Midlands and the south, there was always a degree of HS2 scepticism. Some people were unhappy about its environmental impact. Others questioned the underlying principle; that access to London is the key to regional growth, as if the cities of the north are victims of some dreadful economic disease that the capital, like some medieval king, could cure merely by the laying on of hands. And two years into a pandemic that has inspired a revolution in home working, the predictions of ever-expanding commuter travel between north and south, which were used to justify HS2, also seem a bit retro.

Northern Powerhouse Rail, by contrast, promised to do something that has more widespread support, bringing together the economies of several of the north’s major cities by making it easier for about 8 million people to travel and work across them all. Expanding opportunity and helping to forge an economic counterbalance to London.

That last week’s announcements have scaled back such a vital infrastructure project is another indicator that “levelling up” was always an electoral gambit posing as a political policy. Hardly surprising from a government led by a prime minster who shows off to his Italian counterpart by trying (and failing) to name the seven hills of ancient Rome but who would struggle to name any of the seven hills upon which Sheffield is said to stand.

Yet whatever its original intent, levelling up is a slogan that has taken on a life of its own. It has sparked a now unstoppable national debate about what it would really take to address regional inequalities in the UK. And by tapping into a deep, intergenerational and entirely justified sense of injustice, it encouraged some in the north to suspend their self-protective scepticism about Westminster.

If levelling up were a grand political vision rather than a chimera, it would be accompanied by a commensurately colossal plan to pay for it, one that would not fall at the first hurdle, the victim of a tussle between Nos 10 and 11 Downing Street. Such a vision might look something like Germany’s solidarity tax, introduced in 1991 to fund the integration of East Germany after unification.

If comparing the healing of the north-south divide to German reunification sounds far-fetched, we should remember that today there are parts of East Germany that, despite having spent four decades on the wrong side of the iron curtain, have higher per-capita incomes than parts of the English north and Wales and that Johnson himself has likened levelling up to German reunification. Germany’s historic act of political will was achieved through the imposition of serious policies and the making of tough and often unpopular decisions, not through slogans and gestures. After last week’s events, can anyone seriously imagine such commitments and serious-mindedness emanating from Downing Street?
#boris johnson  #johnson
Add Comment