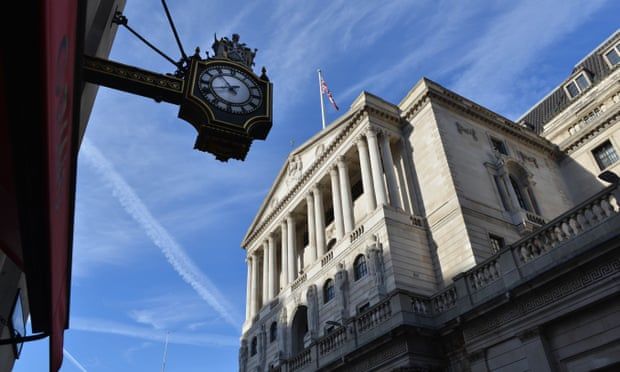 Analysis: an increase would do nothing to alter the course of rising prices

When Bank of England officials meet next month to discuss interest rates, the betting is that today’s inflation number, showing a forecast-busting 4.2% rise in October, should convince them to respond with an increase in the cost of borrowing.

The highest level of annual price increases for a decade was forecast by the Bank of England’s nine-strong monetary policy committee (MPC) when it met earlier this month. The MPC said it envisaged inflation rising to 5% next year – and yet shocked investors by refusing to raise interest rates off the floor.

A month, though, is a long time in world of monetary policy.

There is a sense now that the Bank’s job of maintaining price stability is being undermined by an inflation rate more than double the 2% target set by parliament. A jump in the base rate in December from 0.1% to 0.25% appears to be beyond doubt.

Earlier this week, the governor, Andrew Bailey, told MPs on the Commons Treasury select committee he was “very uneasy” about the rising cost of living and had come close to voting for an increase in borrowing costs.

“We are in the price stability business,” he said.

Previously, Bailey had hinted that “action” would be needed to calm inflation, which he believes could remain stubbornly high unless the Bank uses its main tool to restrict consumer and business spending.

However, the decision remains on a knife-edge. The MPC’s collective view until now has been that the main drivers of inflation this year – higher gas and petrol prices – will prove to be temporary.

While the cost of gas on international energy markets may rise further through the winter, it will fall in the spring, and by the time the cold weather returns in 2022, the expectation is that an orderly queue of gas-laden supertankers will be lining up outside Britain’s ports.

Petrol and diesel prices will likewise tumble next year as Opec countries and other oil producers adjust to a post-pandemic, and hopefully a more climate friendly, level of demand.

Bailey and a majority of the committee may turn this argument on its head should they conclude that the economy’s rapid return to something near its pre-pandemic level of activity is a sign that interest should return to the 0.75% in place back then.

Some members have openly argued that rapidly rising prices through the winter months will convince workers to push for big wage rises, leading to the much-feared wage-price spiral.

Yet there is no sign of wages increasing by the level needed to push up inflation, except in some industries affected by Brexit-related skills shortages.

A rise in interest rates in the UK also has no bearing on the price of gas and petrol, so would do nothing to alter the course of rising prices. It would only give the appearance of doing something.

If the MPC takes a punt on wages spiralling next year, and not just in a few industries but across most of the UK’s 32 million workers, it will be a message that Brexit has seriously damaged the labour market’s ability to respond to rising demand.

If that is the reasoning, it would be more effective for the government to change course and relax visa restrictions than for the Bank of England to raise interest rates.
Add Comment