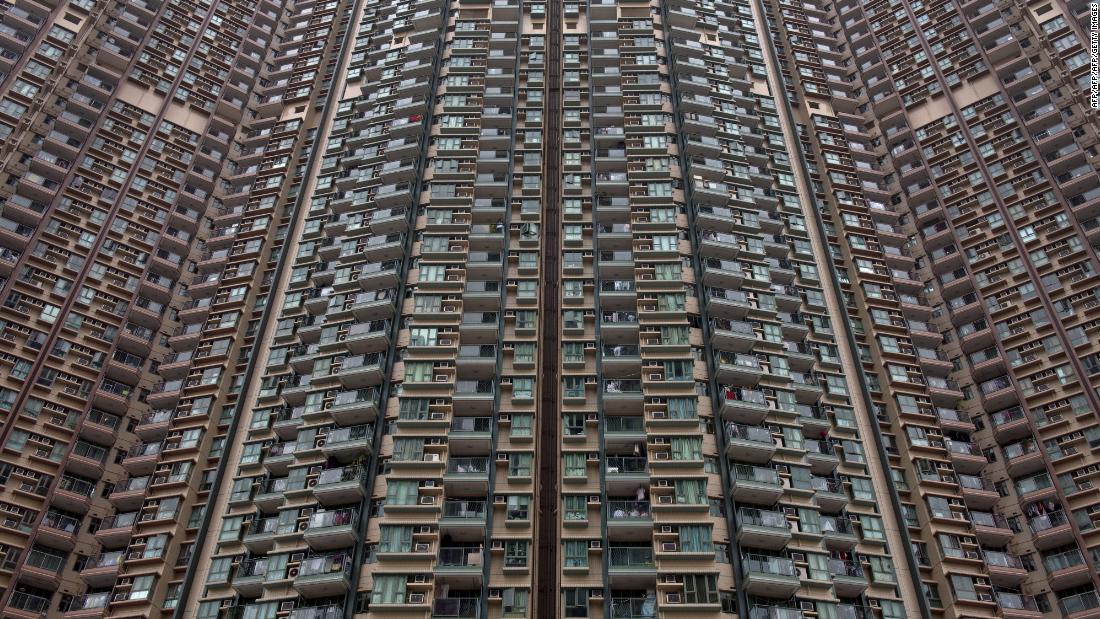 Looking at buildings can actually give people headaches. Here's why

It's three o'clock. You're at work, struggling to focus during the afternoon lull. You gaze out of your office window, hoping for some relief, but instead you feel a headache coming on.

Flat gray concrete lines the streets, while windows form repetitive glassy intervals in stark brick walls. With monotonous straight lines as far as the eye can see, there's nowhere pleasant to rest your gaze. It may seem a superficial problem, but our research has found that looking at urban landscapes may actually give you a headache.

Over tens of thousands of years, the human brain evolved to effectively process scenes from the natural world. But the urban jungle poses a greater challenge for the brain, because of the repetitive patterns it contains.

Mathematician Jean-Baptiste Joseph Fourier showed that we can think of scenes as being made up of striped patterns, of different sizes, orientations and positions, all added together. These patterns are called Fourier components. 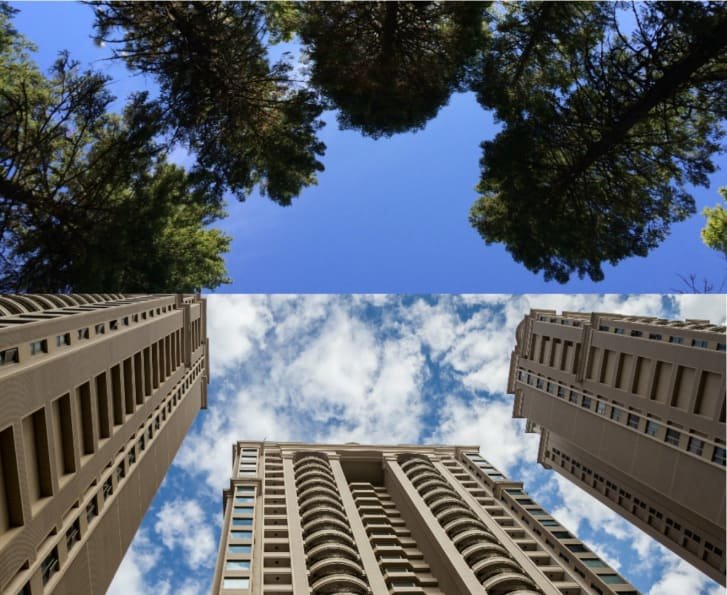 Scenes from nature have stripes that tend to cancel each other out, so that when added together no stripes appear in the image, whereas urban environments tend to feature regular, repetitive patterns.

Hard to look at

In nature, as a general rule, components with low spatial frequency (large stripes) have a high contrast and components with high frequency (small stripes) have a lower contrast. We can call this simple relationship between spatial frequency and contrast a "rule of nature." Put simply, scenes from nature have stripes that tend to cancel each other out, so that when added together no stripes appear in the image.

But this is not the case with scenes from the urban environment. Urban scenes break the rule of nature: they tend to feature regular, repetitive patterns, due to the common use of design features such as windows, staircases and railings. Regular patterns of this kind are rarely found in nature. 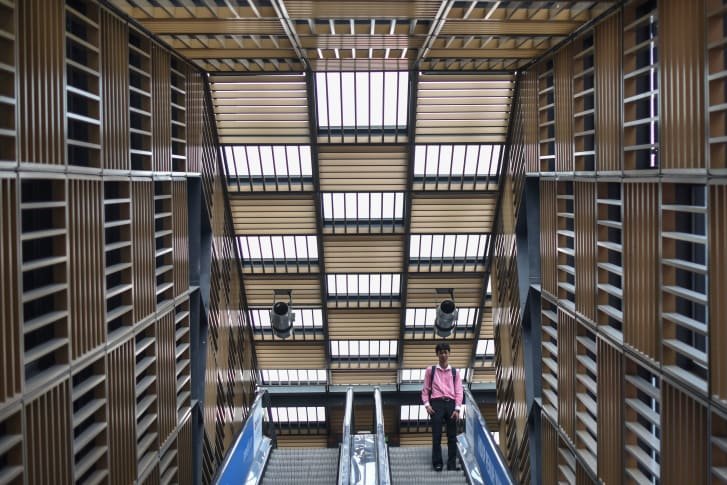 Because the repetitive patterns of urban architecture break the rule of nature, it is more difficult for the human brain to process them efficiently.

Because the repetitive patterns of urban architecture break the rule of nature, it is more difficult for the human brain to process them efficiently. And because urban landscapes are not as easy to process, they are less comfortable to look at. Some patterns, such as the stripes on door mats, carpets and escalator stair treads can trigger headaches and even epileptic seizures.

We came to these conclusions by measuring the efficiency with which the brain processes images of natural and urban scenes. There are two ways of measuring efficiency; the first is to build simple computer models of the way that nerve cells compute what we see.

One model was built by Paul Hibbard (University of Essex) and Louise O'Hare (University of Lincoln), and another at the University of St Andrews by Olivier Penacchio and colleagues. Both models show that when the brain processes images that depart from the rule of nature, the activity of the nerve cells is increased, and becomes less sparsely distributed. In other words, such images take more effort for the brain to process. 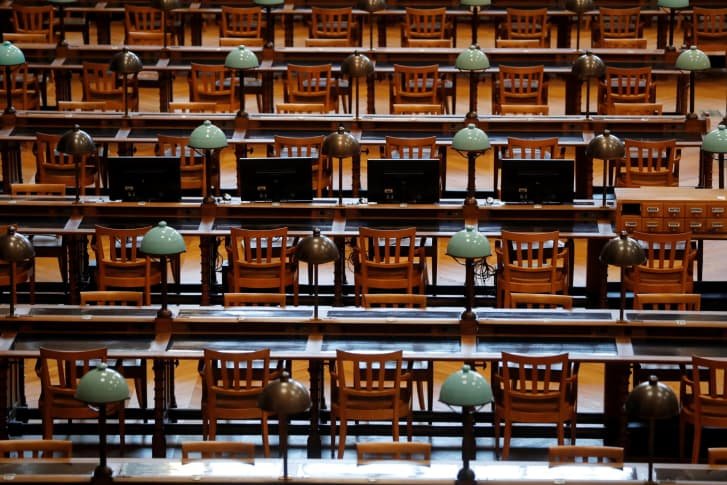 A picture taken on November 30, 2016 in Paris shows the "Salle Labrouste" of the The Bibliotheque nationale de France after its restoration.

For our own research, Olivier and I designed a computer program that measures how well images adhere to the rule of nature. After running the program, we found that departure from the rule of nature predicts how uncomfortable people find it to look at any given image -- whether it's an image of a building or a work of art.

We then analyzed images of apartment buildings, and found that over the last 100 years, the design of buildings has been departing further and further from the rule of nature; more and more stripes appear decade by decade, making the buildings less and less comfortable to look at.

Another way to measure the efficiency of the brain's visual processes is to measure the amount of oxygen used by the visual part of the brain, located at the back of the head. When the brain uses oxygen, it changes color. We can track these changes by shining infrared light onto the scalp, and measuring the scattered light which bounces back off the brain and through the skull. Typically, oxygen usage is greater when people look at uncomfortable images, such as urban scenes. 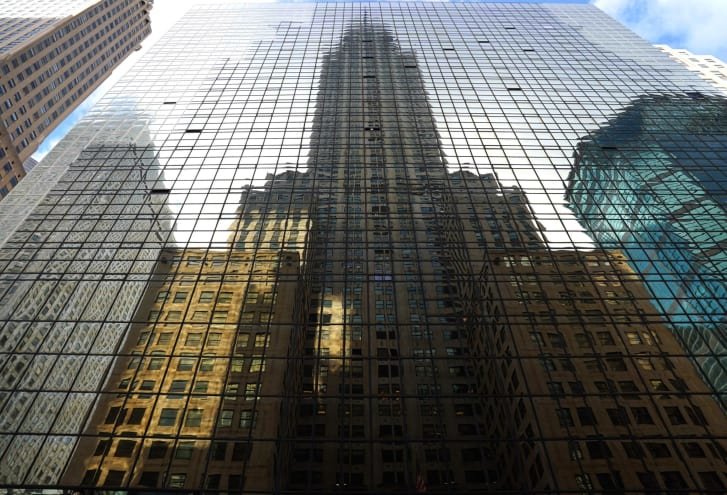 Researchers have found that more and more stripes in architecture appear decade by decade, making the buildings less and less comfortable to look at.

We found that the rule of nature not only predicts the levels of discomfort suggested by computer models, it also predicts how much oxygen is used by the brain. That is, our brains use more oxygen when we look at scenes which depart from the rule. Since headaches tend to be associated with excess oxygen usage, this may explain why some designs give us headaches.

People who get migraines are particularly susceptible to the discomfort from repetitive patterns; these patterns increase the use of oxygen (which in those who sufferer migraines is already abnormally high.) The patterns can give rise to a headache, possibly as a result. Indeed, some individuals with migraine cannot function in certain modern offices, because the patterns bring on a headache every time they enter the building.

Perhaps it's time for the rule of nature to be incorporated into the software that is used to design buildings and offices. Or interior designers can vary the wall designs, blinds and carpets they install, to avoid adding more stripes indoors.

Of course, some repetitive patterns are an unavoidable result of modular construction. But many stripes are there quite unnecessarily, simply as design features -- to catch the eye. Unfortunately, they may end up hitting the head, too.