Long-standing inequalities, such as lack of green space in poorer neighbourhoods, put many people at risk, US experts say.

By three in the afternoon, the temperatures in this working-class Latino neighbourhood of east Los Angeles have reached nearly 37C (99F).

Patrons of a Mexican restaurant in Boyle Heights sit beneath whirring fans and street vendors selling cups of fruit recline under umbrellas, wiping the sweat off their brows. Those who leave the refuge of the shade are immediately hit with a wave of heat from the baking streets.

As a heatwave rolls over the US state of California, not everyone has equal means of cooling down, experts say: poor communities of colour have less access to shade and green spaces, compounding the effects of the scorching heat.

“A lot of efforts to make neighbourhoods more enjoyable places to live, like parks and green spaces, have been focused in more affluent, white communities,” Beth Kent, an environmental law and policy fellow at UCLA School of Law, told Al Jazeera.

Even tree cover, which can lower temperatures by several degrees, is not distributed equally: a study by American Forests, a conservation non-profit in the United States, found that wealthy neighbourhoods have 65 percent more tree cover than poor neighbourhoods, on average.

“If you’re a kid walking down the street in a high-income neighbourhood like Pasadena or the Pacific Palisades, you’ll likely see about four or more trees for every one person,” John Wilson, professor and founding director of the Spatial Sciences Institute at the University of Southern California (USC), told Al Jazeera.

“But if you’re a kid walking down the street in Boyle Heights, that number is reversed: you see about one tree for every three or four people.”

Experts say such disparities are a testament to zoning policies and resource allocation that directed funding into some areas – and away from others – along lines of class and race.

For decades, people of colour in Los Angeles were restricted from living in certain areas reserved for white residents under a policy known as “redlining”. Zoning laws also concentrated industrial activity in or near poorer communities, leaving less room for green areas and filling the landscape with materials more conducive to heat, such as concrete and asphalt.

Such zoning regulations also led to increased pollution, which in turn can cause residents to be more likely to have pre-existing health conditions – diabetes and respiratory conditions like asthma, for example – that can be exacerbated by the heat.

“The way things are in this area, everything is concrete and asphalt,” said Erick Huerta at East Yard Communities for Environmental Justice (EYCEJ), a community group in the city of Commerce, south of Boyle Heights.

“You get no reprieve from the heat, and it takes a real toll on your mental health,” he told Al Jazeera, adding that cool temperatures remain elusive even at night.

Wilson at USC also said that is a serious problem. “It’s especially dangerous because the body never gets the chance it needs to rest and recuperate from dealing with the heat,” he said.

California Governor Gavin Newsom declared a state of emergency last week amid the latest heatwave, which has pushed the state’s electrical grid to its limits by increased use, resulting in the possibility of power outages.

Authorities warned Los Angeles residents to stay out of the sun and seek out cooling centres when the temperatures are at their peak. The facilities provide shelter from the heat and access to cool water, among other things.

The Los Angeles Office of Emergency Management (OEM) also told Al Jazeera that the city has more than 150 cooling centres and that it “​​began early planning and messaging” to alert residents of the dangers of extreme heat.

Meanwhile, authorities say they have stepped up efforts to expand tree cover in neighbourhoods where it is in short supply. The Office of City Forest Management aims to expand the tree canopy of neighbourhoods with little shade by 50 percent by 2028, and says it has planted more than 65,000 new trees since January 2019.

In the more immediate term, the Los Angeles Department of Public Health told Al Jazeera in an email that the city is tackling the urban heat island effect through “strategies such as cool roofs, green space … and cool pavements”.

Kent said that during periods of extreme heat, certain groups such as the elderly, children, those without shelter, and those with pre-existing health issues can be especially at risk if they do not have the means to cool down.

The high temperatures also pose a serious risk to workers in industries such as construction and agriculture. When a fire broke out in southern California last week, several firefighters were hospitalised for heat-related illnesses.

Asked by Al Jazeera what resources were available for those with jobs that make it difficult to shelter from the heat or avoid strenuous activity, OEM said early messaging made it easier for people to “make arrangements”.

Staying cool inside can also be expensive. Morgan Gonzaez, an organiser with the group Communities for a Better Environment, told Al Jazeera that “high initial and maintenance costs of cooling measures like [air conditioning] or home improvements like improved insulation can be heavy financial burdens”.

According to Wilson, the number of extremely hot days in east Los Angeles is likely to double or even triple in the next 30 years – highlighting the urgency of addressing unequal access to means of cooling down.

With high temperatures becoming a more persistent problem, trees have gone from being seen as a form of neighbourhood decoration to potentially life-saving infrastructure.

“Global warming has gone from the charts to a reality in the experiences of people’s lives,” Ian Leahy, vice president of urban forestry at American Forests, told Al Jazeera. “Rather than an afterthought, trees need to be at the heart of our response to extreme heat in urban areas.” 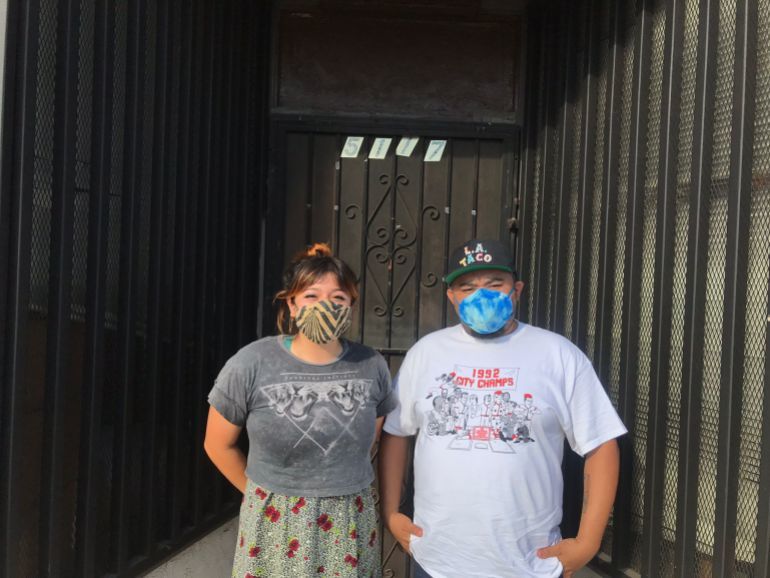 Jocelyn Del Real and Erick Huerta stand outside of EYCEJ in Commerce, California

But the legacies of discrimination that shaped the sparse tree cover over poor neighbourhoods have left some residents wary that they will be the ultimate beneficiaries of future programmes.

“People can be sceptical of efforts to create more green spaces because it can be a precursor to gentrification,” said Jocelyn Del Real, a spokesperson for EYCEJ, the non-profit in Commerce, California.

“People wonder, ‘Is this really being done to benefit us?’ Without other things like protections for tenants, who’s to say we’ll be here to enjoy the benefits of these projects?”