England made a sobering start to their autumn campaign as Argentina shocked an 80,000-strong Twickenham crowd with an audacious and deserved victory.

England led 16-12 at half-time, but Emiliano Boffelli and Santiago Carreras crossed in quick succession to turn the game on its head.

Replacement Jack van Poortvliet scored to repair some of the damage, but Boffelli's boot proved decisive in the closing stages.

It is only Argentina's second away victory over England following on from a success in 2006.

It is the latest landmark win in a season of success for the Pumas, following on from a first-ever win away to New Zealand earlier in the year.

But Argentina still finished bottom of the southern hemisphere's Rugby Championship and were expected to ease England into a month of fixtures that culminates with matches against the All Blacks and world champions South Africa.

England coach Eddie Jones glowered down from the big screen as his side's increasingly desperate attempts to salvage victory came to nothing.

When replacement Henry Slade spilled forward in midfield to end an England move of momentum, Argentina's bench shot to the sky in celebration.

The two teams next meet in September in their opening pool match of the Rugby World Cup.

Owen Farrell captained England after Courtney Lawes, who has led the team for the past year, was ruled out with concussion

A saturated Twickenham pitch was no platform for running rugby and for much of the opening exchanges Jones' 'New England' fell back on old strengths.

Openings had been scarce and handling errors plentiful before Joe Cokanasiga's power - a real point of difference among England's back-three options - prised open the Puma's tight defence on 25 minutes.

The Bath wing surged onto an inside pass from Ben Youngs in the 25th minute, shrugging off centre Jeronimo de le Fuente and twisting through Juan Martin Gonzalez's tackle to ground the ball.

England could not cut loose though. Boffelli's boot had the Pumas within a point at 13-12 before the England front row crumpled their counterparts at the scrum to give Farrell a penalty right in front to slot with the final act of the half.

England's four-point lead was whipped from under them in the space of four second-half minutes.

Shortly after Owen Farrell's pass went to floor as prop Thomas Gallo put the heat on the England captain. Argentina fly-half Santiago Carreras scooped up and, showing all the pace that has him stationed on the wing for Gloucester, raced in from 50m.

Referee Andrew Brace called for a review of Gallo's hit on Farrell, but the replays could not detect any knock-on from Gallo as Farrell got his pass away and the score stood.

Argentina led 24-16 and the jeopardy transformed a sedate Twickenham.

The raised volume brought more urgency and England landed a quick counter as replacement Van Poortvliet, just 29 seconds after coming on, darted through a hole and slid under the sticks.

Farrell's penalty on the hour put England back in front 26-24. Boffelli snatched it back with a kick of his own three minutes later. Farrell responded once more.

But it was the Edinburgh man who had the final word as England ran out of steam and ideas.

Argentina's last victory at Twickenham prompted the sacking of England head coach Andy Robinson, the hiring of Brian Ashton and a run to the Rugby World Cup final less than a year later.

A similar change of leadership is not going to happen to Eddie Jones, who is still England's most successful coach when measured by win percentage.

But the Australian will know things have to improve before he takes on his old friend and Argentina coach Michael Cheika again in Marseille in 10 months time.

Player of the match- Santiago Carreras

'We made silly mistakes' - what they said

England head coach Eddie Jones on Amazon Prime: "Losing always hurts. It was one of those games, the lead changed a lot.

"You can't put your finger on what went wrong. Structurally we had control of the game but we kept making fundamental mistakes and easy errors.

"We have no excuses, the referee, the pitch was the same for both teams. They got the points at the right time. We lacked cohesion.

"After half-time we were getting our game in place, we were looking fluid in attack but then we made mistakes and we were chasing our tail.

"We made silly mistakes but I like the way the team went about it. We didn't finish well, there was that lack of cohesion. 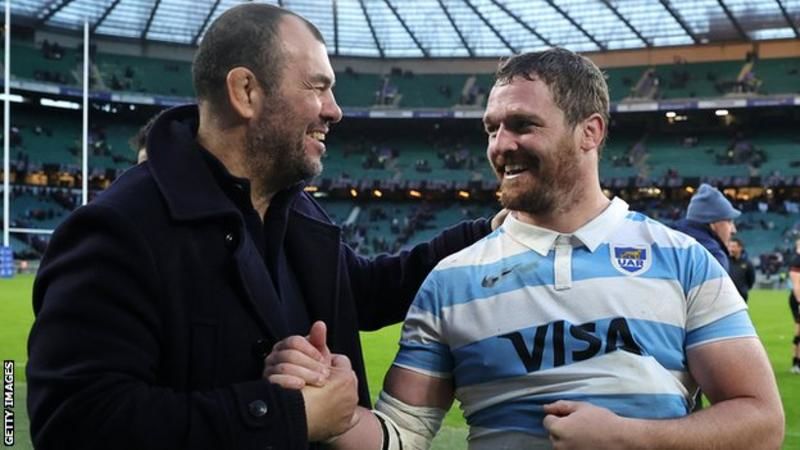 Argentina head coach Michael Cheika: "It was good and it was tense. I really liked the way the guys prepared this week. They had a really good attitude about them.

"It was tricky too because no one in that side had won against England before so you've got to combine the mental side of it with the tactical and the technical side of it.

"It's a great feeling and really nice for the lads to get that opportunity to have that experience here."