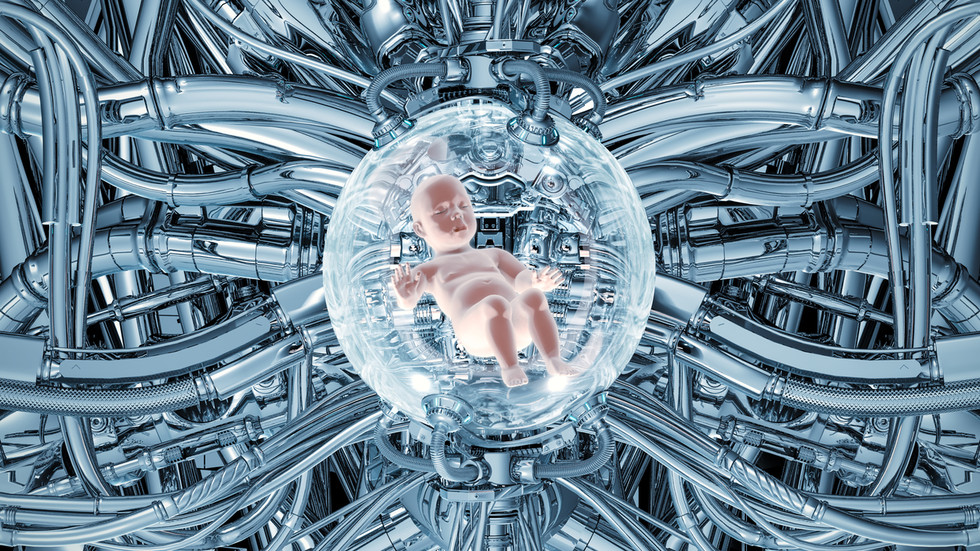 Are motherless babies from artificial wombs the future we’re heading for?

The ability to grow children independently from their mothers is currently the stuff of science fiction, but in our increasingly transhumanist, managerial world could they one day be a horrifying feature of reality?

A film due to start shooting in March next year will feature ‘artificial wombs’ as a central plot device. ‘The Pod Generation’, described as a sci-fi rom-com, will feature Emilia Clarke, of Game of Thrones fame, and Chiwetel Ejiofor, best known for his starring role in 12 Years a Slave, as Rachel and Alvy, a couple looking to have a child together, but not in the ‘traditional fashion.’ Set in the near future, the couple will be able to “share” the pregnancy and its side effects thanks to newly developed ‘detachable wombs,’ which sounds…horrific.

Though ‘The Pod Generation’ is fiction, artificial wombs are in fact a hot topic in predictive science news. While originally this ‘mad scientist’s dream’ may have been on a list of other crazy inventions dreamed up by an unfettered atomic-age imagination, for it to be trending nowadays seems more due to the progressive obsession with transhumanism and the escape from the bounds of ‘gender’ or traditional fertility.

Further, in a different branch (from the same root) there seems to be a subset of progressive liberalism obsessed with all things ‘science’. What we might call the ‘Bill Nye’ cult of doggedly atheistic pop science fanatics, who emotionally scream about “the science,” often punctuating the scientific jargon with loud swear words owing to some misguided notion that it supports their own brand of woke politics.

Even worse are the industrial health-and-safety fanatics. This cult fearfully believes there is a magic technological solution to every scary-sounding headline piped into their skulls via the 24-hour news cycle. They think there is a magic pill for everything from racism to rabies and have, as a result, blindly supported some of the more egregious industrial horrors of our mass-production society. These people think growing living limbs and organs for transplants, like a human battery meat farm, is a nifty idea.

Exogenesis is the term for growing a baby outside the womb. The only non-horrifying aspect to this research is for the development of a prototype for gestating premature babies. But, sadly, in all cases where Western liberal science refers to exogenesis for premature babies, you will find the excited follow up: “and we might be able to do away with human wombs altogether.”

All such plans, including the food industry’s Frankenstein laboratory attempts to ‘grow meat’ – tend to view life from a decidedly industrial lens. All life on earth, when viewed in purely materialist and quantifiable terms, has the potential to be treated like factory-farm hogs or hens. A matter of numbers, in a system of the purest practicality. Globalist food distributors would like nothing better than to grow living, oven-ready chicken nuggets in a giant lab. Perhaps they already do?

It seems humans are not far from similar treatment. In many ways world global elites move closer every day to thinking similarly towards the people they are responsible for – it becomes more and more a matter of merely managing numbers on a chart. How to keep them ‘safe’ for ‘their own benefit.’ All non-materialist considerations get lost in this final industrialisation: human livestock warehousing. Not enforced by authoritarian gunpoint, but from manipulation of our fears. The push to factory-farm ourselves derives from a slavish obsession with safety.

To date, experiments in synthetic wombs have been performed on animals, using hard acrylic tanks and plastic bags which contain artificially sustained uterine tissues – essentially a kind of horrific plastic egg. A proper working ‘gestation egg’ (artificial womb) requires technology to create an artificial placenta, this is their current hurdle. I imagine this will also be some kind of plastic abomination. I can only imagine, in our already plastic-toxified society, what gestating and growing people, from the very onset of life, in plastic poly-whatever might result in. An artificial replacement for amniotic fluid also needs inventing to finalise the techno-dream of the synthetic womb.

While there are admittedly benefits to this idea for traditional pregnancies, such as considerations for IVF treatment, the language surrounding this technology invariably leads to the progressive buzzwords which cause in many of us great trepidation. Language such as ‘equality in reproduction,’ for instance. By this they mean gay couples being able to ‘create’ children without using a surrogate, or transgender ‘male-to-female’s fulfilling their fantasies by ‘creating’ children from the artificial womb.

Somewhat ironically, despite so much of our contemporary world being the political plaything of feminism, the artificial womb is hailed as a way to achieve pregnancy ‘without women.’ A truly motherless child, a child whose parent is technology itself.

Just how far science in the West today is willing to go to facilitate the whims of gender theory enthusiasts currently seems boundless. If they can frame their argument as an end to some form of ‘oppression,’ then billions will be spent investing in it. Already they are willing to ‘change the gender’ of children too young to understand what that means, so if you think they will show the slightest hesitation ‘for the sake of the children,’ you are mistaken. Nothing will stand in the way of explorative science, in order to give our spoiled post-gen-x generations something that nature has denied them.

If the industrial system is triumphant, that is, if the system itself is a kind of entity which self-protects, then all the sham reasons provided (science, safety, equality) are constructs of a mechanised cycle which is horrifically outside our control. If the distribution cycle of needs is broken down to its fundamental essentials, then humans may indeed eventually be seen as a kind of pod-living battery hens. As experimental units of meat, grown in plastic eggs and kept alive in warehouse cubicles, subdued by illusory pleasures, so that the system can continue autonomously about them. There may be no Matrix-esque blue-pill/red-pill escape from such a system.