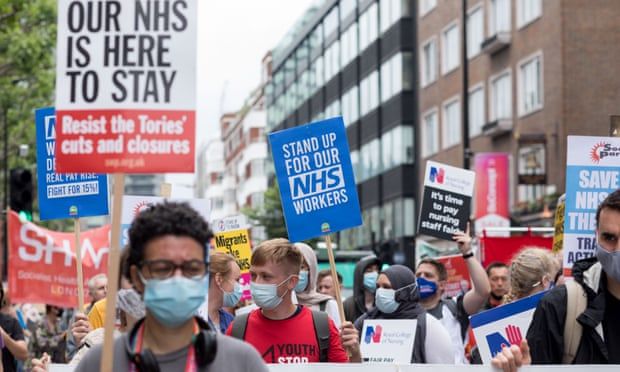 Health unions have accused ministers of treating NHS staff “with contempt” after the government pulled an announcement about this year’s pay rise at the last minute without explanation.

The health minister Helen Whately was due to announce that staff in England would receive a 3% increase, three times higher than the 1% first planned, in a statement on Wednesday in the House of Commons.

But she did not mention health service pay at all in her “NHS update”, prompting frustration, anger and strongly worded criticism from Labour and NHS staff groups.

Whately did not explain the omission and, when challenged by the shadow health minister, Dr Rosena Allin-Khan, said the size and detail of the award had not been finalised. Allin-Khan said the failure to announce the pay deal was “an insult of the highest order”.

Pat Cullen, the acting chief executive of the Royal College of Nursing, said: “This treatment of our NHS workers is shameful. Ministers are holding them in contempt and we have no choice but to condemn this behaviour.

“With tens of thousands of nursing vacancies and thousands more considering their future in the profession, the government is sending the worst possible signal with this political game playing.”

Staff organisations and NHS bodies, which had been told this morning by the Department of Health and Social Care (DHSC) that Whately would put forward the deal in her speech, were surprised by her failure to give any detail.

Allin-Khan said in the Commons: “Once again we find this government has had to row back on a shoddy, ill-thought-through position with their 1% pay rise – a real-terms pay cut, rejected by the independent pay body.

“So what did the government do? Nothing. Less than an hour ago there were competing briefings on what the deal was going to be but it turned out to be nothing. Our NHS staff deserve better than this.

“They’ve worked incredibly hard throughout this pandemic, the personal sacrifice is astounding, their hard work never stops and that is not without consequences.”

The delay in announcing the award means 1.2 million NHS personnel will have to wait even longer to discover the size of their pay rise for the year that began on 1 April.

With the Commons rising on Thursday for the summer recess, it means the government has one last opportunity to announce the deal to MPs before September.

Rachel Harrison, a national officer with the GMB union, said: “This is completely outrageous – virtually the last day of parliament and the government has insulted hardworking NHS workers once again by staying silent.

“NHS workers who tuned in to watch the minister today will be rightly disgusted by this lack of respect. NHS staff have put themselves in harm’s way throughout the pandemic and as a health union we cannot accept MPs swanning off on holiday leaving health workers in limbo.”

There is speculation the government’s plan to make only 1.5% of the proposed 3% award a permanent increase to baseline salaries, with the other 1.5% being a one-off bonus – which the Guardian disclosed on Tuesday – was a key factor in the announcement being pulled.

Following that, some health unions told the DHSC privately that they would publicly reject such a deal, given that staff pensions would be affected and members would regard the 3% headline figure as spin.
Add Comment