Andrew Tate will remain in a Romanian prison for another 30 days after being arrested there on suspicion of human trafficking, rape and forming an organised crime group.

The former professional kickboxer and divisive social media personality was detained with his brother Tristan and two others in a series of raids across the capital Bucharest on Thursday night.

Prosecutors said the suspects ‘appear to have created an organised crime group with the purpose of recruiting, housing and exploiting women by forcing them to create pornographic content meant to be seen on specialised websites for a cost’.

They added: ‘They would have gained important sums of money.’

All four will be held for 30 more days after a judge extended their initial detention period of 24 hours, Ramona Bolla, a spokesperson for Romanian anti-organized crime agency DIICOT, said.

Ms Bolla said the decision was not final.

Outside the court, the Tates’ lawyer, Eugen Vidineac, said they would appeal against the detention.

‘We are not at a stage where guilt or innocence is proven, for now we only discuss preventive measures,’ he added.

Mr Vidineac told the BBC his clients reject all the allegations. Andrew Tate, 36, has yet to comment directly on the accusations.

Footage circulated widely on social media on Thursday appeared to show the brothers being led away from a luxury villa.

According to the directorate, six injured people have been identified in relation to the investigation, one of whom is said to have been violently sexually assaulted in March.

Some of the suspects allegedly used the ‘loverboy’ method of trafficking, which involves a man luring a victim into a relationship in order to sexually exploit them later, DIICOT said.

The victims were transported and housed in buildings in Ilfov county, which surrounds Bucharest, where they were coerced into making pornographic content, it is alleged.

DIICOT released a video of the raid showing guns, knives and money on display in one room.

The post was the latest in a series of ‘matrix’ references made by Tate, apparently linked to the movie franchise which depicts a fictionalised world in which humanity is trapped in a simulated reality.

The concept of the films has been co-opted by far-right conspiracy theorists and men’s rights groups in recent years. 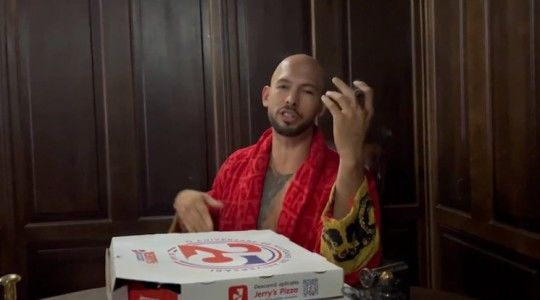 Earlier in the week, Tate sparked a war of words with climate activist Greta Thunberg

Since retiring from combat sports, Tate, 36, has received attention for his misogynistic comments on social media.

In 2016, he was removed from Britain’s version of the Big Brother TV show over a video that appeared to show him hitting a woman with a belt.

The following year, he was banned from Twitter for saying women should ‘bear responsibility’ for being sexually assaulted, but was reinstated last month.

Earlier in the week, Tate sparked a war of words with climate activist Greta Thunberg when he shared a picture of himself standing next to a Bugatti and claimed he owned 33 cars.

‘Please provide your email address so I can send a complete list of my car collection and their respective enormous emissions,’ he tweeted, tagging Ms Thunberg.

She replied: ‘Yes, please do enlighten me. email me at smalldickenergy@getalife.com.’

Ms Bolla, from DIICOT, refuted widespread claims in the media that an address brandished on a pizza box that featured in the clip led authorities to his arrest.

She said the claims are ‘funny, but no’.