Dozens of staff at an ambulance trust claim they cannot drive its £54m fleet of new vehicles due to their height or body shape.

Documents reveal a string of problems with converted Fiats, which replaced the ageing Mercedes vans at the East of England Ambulance Service (EEAST).

The vehicles are part of an NHS drive to standardise its fleet and are being adopted by trusts across the country.

An EEAST spokesperson said it had been working to address the issues.

The trust brought in a specialist to assess 160 staff members who, due to their height and body shape, had come forward having experienced a range of problems.

Ninety-four have now been identified as being unable to drive the vehicles.

Entries from the trust's risk management system - and obtained via the Freedom of Information Act - reveal how taller staff in particular experienced difficulties fitting into the cabs of the modified Fiat Ducatos.

Complaints ranged from back pain, not being able to see out of the windscreen properly to knees and shins scraping the dashboard.

Other entries detail instances of:

*  The engine cutting out when driving over potholes and speed bumps, due to a vehicle safety feature which has since been improved. In one instance, a critically ill child's transfer to hospital was delayed while a replacement vehicle was called

*  Drivers in work boots finding pedals too close together, resulting in the accelerator being pressed instead of the brake

*  Hands and fingers becoming trapped in the sliding door, with one staff member breaking two fingers. Mandatory training on this has now been rolled out

One emergency medical technician told the BBC: "I was told that anyone over 5ft 9in (1.75m) would be unable to drive it as they would not be able to achieve a comfortable and safe driving position.

"I did try to get into the driver's seat but I couldn't adjust the seat to allow me to operate the pedals properly and the steering wheel was pressed against my legs, making it difficult to steer safely."

They added there had been long delays when trying to book an alternative vehicle when starting a shift. 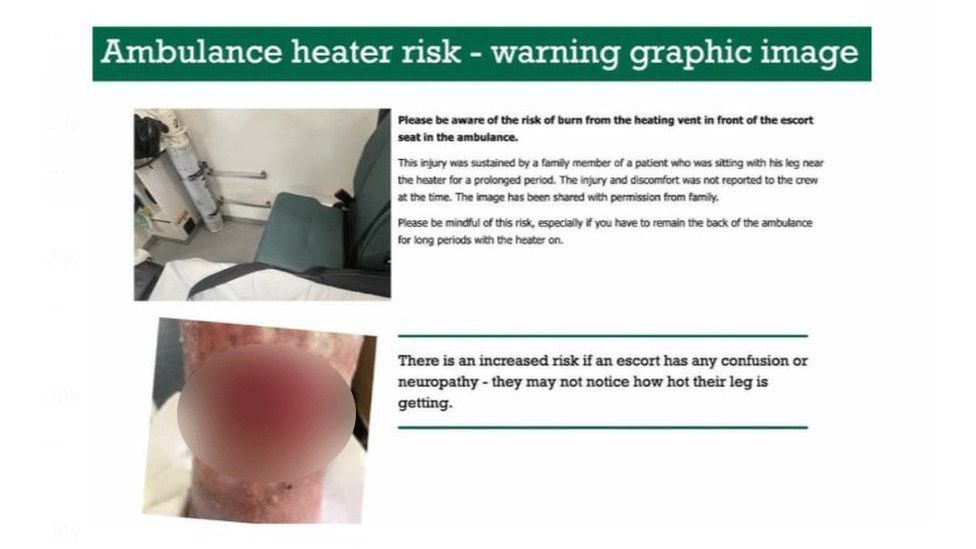 An alert was also issued to staff after someone escorting a patient was severely burned on the leg by a heater outlet in the back of the ambulance.

However, the trust said this was not an issue confined to the Fiats and is a known danger for floor vent type heating.

The adapted Fiat Ducatos have been rolled out across the country as ambulance services standardised their vehicle procurement following a report by Lord Carter of Coles in 2019, which led to a national specification.

In it, he stated "it is simply unacceptable that trusts purchase different ambulances and stock them with different equipment and medicines".

EEAST uses a box design for its Fiats, whereas most trusts use the panel van version, though the cabs are the same.

This is because it was ahead of the national specification work.

It followed extensive testing with different trial vehicles, staff engagement and a board review that approved the purchase of the Fiats in 2018.

The trust branch of the union Unison is now working with colleagues around the UK to challenge the national specification.

EEAST has raised concerns with NHS England and Improvement (NHSE&I).

EEAST chief executive Tom Abell is now in talks with other ambulance bosses and NHSE&I to learn from the experience in the East of England.

An EEAST spokesperson said the fleet was rolled out three years ago, following "extensive trials with colleagues and consultation with staff, trade unions, patients and carer groups".

"Since the rollout, a small number of colleagues raised concerns about the cab area, which is the same as the current national ambulance specification," he said.

"We have been working to address these issues, which affect a small proportion of our colleagues, through assessment by an independent ergonomist to identify potential modifications to the vehicles."

It said some of its older Mercedes ambulances had been retained for staff unable to drive the Fiats, and it was "exploring further options for a more permanent solution".

There have also been issues with the cabs at another ambulance service.

Taller staff at the South East Coast Ambulance Trust said they also had problems with seatbelts not fitting properly.

A spokeswoman for Fiat said: "The Fiat Professional Ducato, alongside all vehicles, must adhere to a European type approval as well as Euro NCAP, a rigorous set of safety tests.

"The installation of seat belts is carried out in accordance with rules set by the ECE14 and ECE16 standards.

"If these standards are not adhered to, the vehicle cannot be approved and therefore sold. Fiat Professional's vehicles, including the Ducato, fully comply with all legislation."