The Met Office has issued an amber weather warning for heavy rain in parts of eastern Scotland.

It warned of fast-flowing or deep floodwater "causing danger to life".

The amber alert is in place for Aberdeen, Aberdeenshire, Angus and Perth and Kinross from midnight on Thursday until 15:00 on Friday.

The Met Office said some parts of eastern Scotland could see as much rain in 24 to 36 hours as would be expected during the entire month of November.

There is also a yellow warning of rainfall on high ground, with up to 100mm (4in) possible across the hills of Aberdeenshire and Angus.

Storms began to hit the north-east coast on Thursday afternoon.

Flooding closed the railway line between Laurencekirk and Stonehaven for four hours.

Harbour breakwaters at the Torry Battery were hit by fierce waves with storms expected to continue though the night and into the morning. 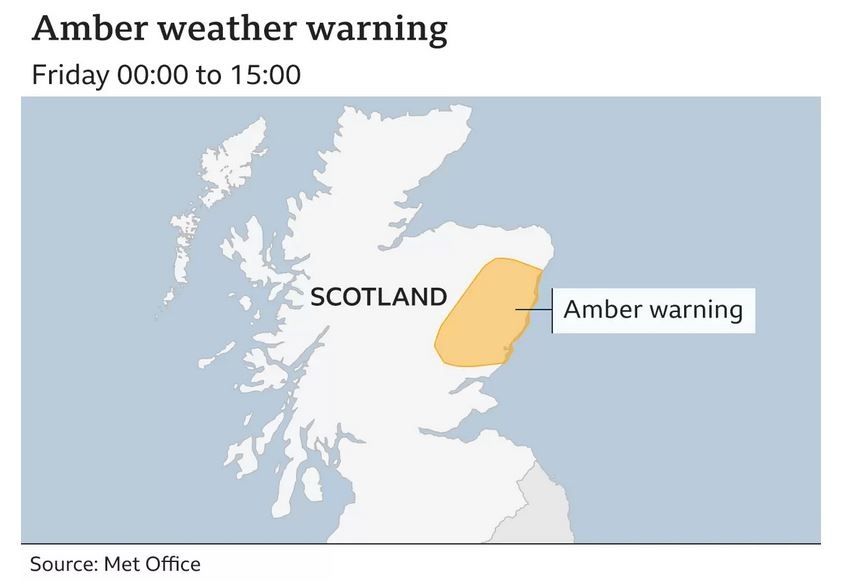 Chief Supt Louise Blakelock, head of road policing at Police Scotland, said there was a high risk of travel disruption.

She added: "The Met Office, Sepa and Traffic Scotland websites have valuable information about weather disruptions and we would advise people to check these sites before setting off on your journey."

Scotland's Transport Secretary Jenny Gilruth said motorists should "make sure their routes are available, follow travel advice from Police Scotland and drive to the conditions".

ScotRail said speed restrictions were in place on the network, with passengers warned to expect longer journey times.

He added: "On Friday, Aberdeenshire and Angus in particular could experience significant impacts. These may include flooding in parts of communities, property and agricultural land."

Aberdeen City Council said it had been cleaning storm drains.

The flood gate at Riverside Drive beside the River Dee has been closed in preparation for the heavy rain and flooding.

A council statement said: "Residents in flood-prone areas are recommended to stock up on flood prevention including sandbags or door flood stops from DIY stores."