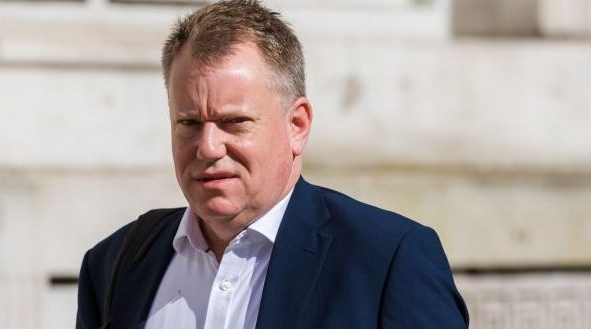 ‘All options on table’ if no agreement reached with EU on protocol, says Frost

Britain’s chief Brexit negotiator has said the Northern Ireland protocol is “democratically extremely difficult” but ultimately justified as a way of protecting the peace process.

Speaking before a Stormont committee, David Frost said the post-Brexit arrangement to prevent a hard Border on the island of Ireland was a “huge compromise” by London that was “made willingly”.

It was “pretty exceptional” to agree to apply EU law in the North and control the movement of goods from Britain into the region, but the “wider goal” of maintaining peace in the North “justifies” the deal, he suggested.

“We knew this was democratically extremely difficult, the imposition of another party’s law even if it is in - as we saw it and see it - the wider goal of protecting the Good Friday Agreement and peace process and the achievements that have been made so far,” he told MLAs.

“That is a very important wider goal, that justifies things.”

While it is “pretty unusual to have laws set by an outside entity” there is an “albeit imperfect” consent mechanism built into the agreement which allows the Stormont Assembly to review the arrangement in 2024, he added.

The territorial integrity of the UK is not impacted, he insisted.

Mr Frost blamed former prime minister Theresa May’s negotiating team for lumping him with “a particular inheritance” which meant “the protocol is shaped as it is”.

“Unfortunately, we were not able to go back to scratch and do things in a different way and I think the previous team are to a very large degree responsible for some of the infelicities of the protocol and the withdrawal agreement that we might be better without - but unfortunately we are where we are,” he said.

Britain has forwarded to the EU a dozen papers with detailed proposals for improvements, he said, but had yet to get responses, he said.

One was a proposal “based on equivalence” which he described as “intellectually perfectly possible” but “getting the politics in the right place seems to be more difficult”.

The UK has rejected a call by the EU to align with its veterinary and food standards to cut up to 80 per cent of checks on goods moving between Britain and the North under the protocol.

Mr Frost said it was “fundamental” that goods can move across the Irish Sea “in a freer way than at the moment”.

Britain “rejects” suggestions that it was not implementing the protocol, and had already delivered “four new IT systems from scratch” and will be spending “the best part of half a billion pounds over the next year or two” on schemes to support it, he said.

Mr Frost described ongoing talks with the EU as “a little tense” and said that “all options are on the table” if there is no break in the impasse.

Britain’s approach to the implementation of the protocol will be presented in Westminster later this month.

“I think the prize on offer for us if we can find this new balance is that we will set the relationship between us and the EU on to a different trajectory,” said Mr Frost. “It is a little bit tense at the moment. Nobody wants that and I think the protocol issues are at the core of that.”

Mr Frost told Stormont’s Executive Committee there will “always be a need for a tailored treaty relationship between us and the EU covering Northern Ireland”. However, he said arrangements needed to be sensible, proportionate and have consensus.

“We will always prefer a consensual approach in solving this question, and I think there are ways of finding a way through and delivering on that… that is the way we hope to proceed but all options remain on the table,” he added.