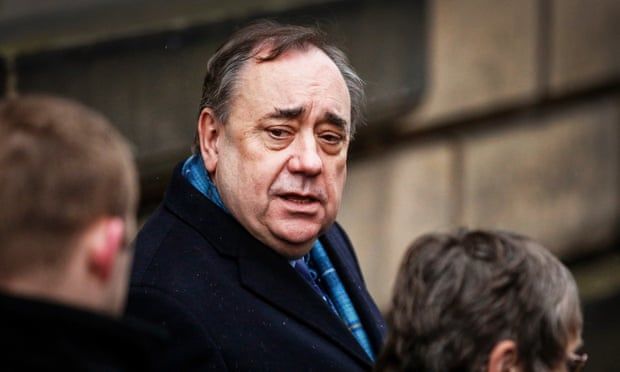 Alex Salmond invited again to give evidence to Holyrood committee

The Holyrood committee investigating the Scottish government’s handling of sexual harassment allegations against Alex Salmond has repeated its invitation to the former first minister to give evidence next week despite another narrow vote not to publish key evidence submitted by him.

After a lengthy meeting late on Wednesday, the committee resolved that last week’s court ruling had “no impact” on its decision not to publish evidence that Salmond says is an essential part of his case alleging that Nicola Sturgeon broke the ministerial code.

But Salmond refused to attend the inquiry last week after the committee reached crisis point, splitting 5-4 along party lines over publication.

After a court challenge by the Spectator magazine, the senior Scottish judge Lady Dorrian agreed last Thursday to amend a court order she imposed on what could be reported about Salmond’s criminal trial on 14 counts of alleged sexual assault, including an attempted rape, of which he was acquitted last year.

In her written reasoning, which was published on Monday, Dorrian said that it was not for the court “to interfere with … or to seek to direct the committee in any way,” and on Wednesday night the majority of MSPs resolved that “the scope of the order has not changed”.

A majority also agreed to refer the matter to the Scottish Parliamentary Corporate Body, as publisher, for a final decision, although it is unlikely that Holyrood’s governing body would rule counter to the legal advice given by its own lawyers, who have advised against publication for legal reasons.

Salmond’s lawyers, Levy & McRae, who were also instructed by the Spectator, wrote to the committee last Thursday to say they believed Dorrian’s amendment should clear the way for the parliament to publish the relevant evidence, thus enabling Salmond to appear in person, and earlier said that he had “cleared Wednesday from his diary”.

It is understood that, although Salmond has resubmitted his evidence with certain amendments to the committee following Dorrian’s ruling, the committee was not able to consider this later document on Wednesday for administrative reasons.

A Scottish parliament spokesperson said: “The committee tonight considered the detail of Lady Dorrian’s ruling and its impact on the committee’s decision not to publish Mr Salmond’s evidence on the ministerial code. The majority of the committee is clear that the judgment has no impact on its previous decision and understanding of its legal obligations and its decision on the publication of the submission from the former first minister on the ministerial code. The scope of the order has not changed.

“However, the committee is keenly aware that publication is for the Scottish Parliamentary Corporate Body and has tonight agreed to refer this to the SPCB for a decision on its publication.

Salmond has claimed that officials close to Sturgeon and her husband, Peter Murrell, chief executive of the SNP, were involved in a conspiracy to bolster the government and police investigations, and had pushed complainants into giving evidence. Sturgeon has repeatedly denied any wrongdoing and suggested the former SNP leader is angry with her because she “didn’t collude with him to make these allegations go away”.

The option remains for the committee to compel Salmond to appear in person. The committee’s timeframe for completing evidence sessions and writing its report is becoming increasingly tight, with Holyrood going into recess at the end of next month for May’s election.
Add Comment