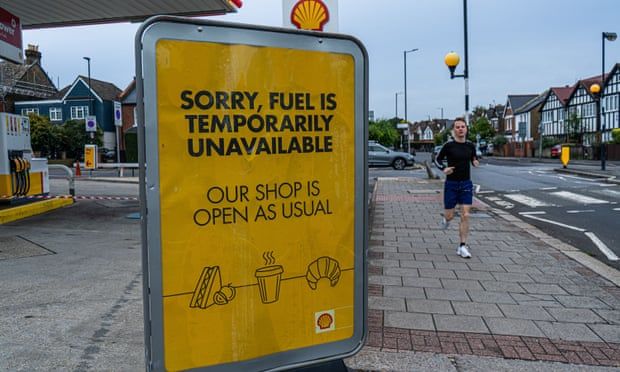 Ambassador says many of Britain’s 150,000 Albanians would step in out of gratitude to the country

Albania has said thousands of its migrants to the UK would be willing to work for nothing to help tackle the petrol crisis.

Albania’s ambassador to the UK, Qirjako Qirko, told the Guardian: “If your government would like, we can offer good reliable drivers, maybe 5,000 immediately.”

He claimed many of the estimated 150,000 Albanians living in the UK would work out of gratitude to their British hosts. As a significant number are believed to be undocumented, it is impossible to know how many are qualified HGV drivers.

But Qirko, who had just spent an hour queueing for petrol without success, said he believed many Albanians in Britain were truck drivers who could help make up a shortfall estimated at up to 100,000.

He said: “The Albanians are ready to work for the British government to overcome this problem free of charge. I don’t know if they have the right licences, but if they did I’m sure everyone here would say ‘I can help’.

Qirko cited the 1999 Nato intervention in Kosovo for saving hundreds of ethnic Albanians and said: “Albanians in the UK would work free of charge for this country because of what this country has done for them … We are grateful forever to the government, and to the army of this country, for what they did for our brothers in Kosovo.”

Albania, one of the poorest countries in Europe, has hopes of joining the EU but in 2019 France blocked the opening of membership negotiations. In 2017, twice as many Albanians as people of any other nationality were caught as stowaways at UK ports, Home Office figures showed. This year, the home secretary, Priti Patel, signed an agreement to remove Albanian nationals without the right to be in the UK.

Qirko urged the British to see Albanians as an asset rather than a problem, complaining they were too often portrayed as gang members, drug dealers and human traffickers, including by government bodies such as the National Crime Agency.

He said: “Of course, there are some people from my community that are involved in criminal activity, but why is it so necessary to mention their nationality? Nationality has nothing to do with criminality. You don’t say someone is a gay or lesbian criminal, so why say there are ‘Albanian criminals’?”

He added: “By mentioning the nationality you create a negative perception, regarding the whole community here that is doing an honest job. Albanians who come here are not criminal. They are people who like a better life.”

In 2019, Qirko criticised the Fifty Shades of Grey author EL James for her portrayal of Albanians in her novel The Mister, about a London maid who had been trafficked. Qirko has a copy of James’s letter in response on his desk. She wrote: “In the course of my research for the novel, I did visit Albania and found it to be an extremely beautiful country. And its people to be warm and welcoming.”

Qirko said: “I’m here to stand up for my people. They are not criminal, they are hard-working and honest.”

The military is set to start delivering fuel to forecourts on Monday, amid reports that south-east England is experiencing worsening shortages. Petrol prices are rising, with one garage in London reportedly charging £2.93 for a litre of super unleaded.

Qirko strongly denied reports on Sunday that Albania was negotiating a deal with the UK to receive migrants who cross the Channel in small boats. The Sun said officials were close to striking a deal on an overseas processing centre. Setting up such a centre for refugees is part of the new nationality and borders bill.

Olta Xhaçka, Albania’s foreign minister, has also denied the report. “So embarrassing the fake news spreading in the British media about an ‘offshore hub in the Balkans’ namely in Albania to ‘detain migrants crossing Channel from France’,” she tweeted.
#priti patel
Add Comment