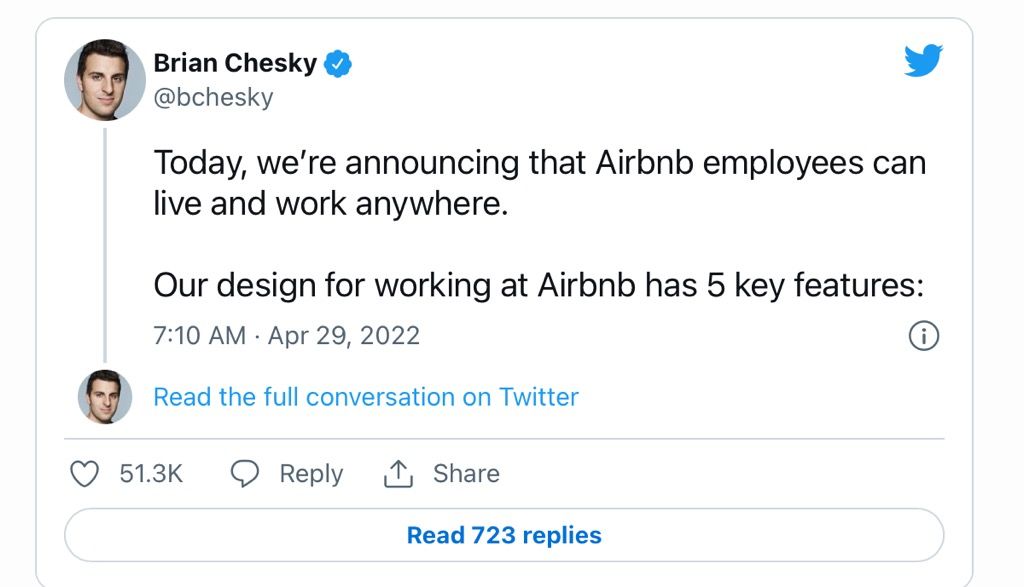 Airbnb says staffers can work remotely forever, if they want

Airbnb won't require most staffers to return to the office — ever.

The company told employees Thursday that they can permanently work remotely and can relocate anywhere within the country they currently work. Doing so won't negatively impact compensation, the company said, meaning it will not adjust salaries downward if an employee opts to move to a city where the cost of living is lower.

In a lengthy email to staffers Thursday, CEO and cofounder Brian Chesky outlined its new policies and expectations. He noted that permanent flexibility will allow the company to "hire and retain the best people in the world," rather than simply those who are within "commuting radius around our offices." Airbnb said it has 6,000 employees globally, with more than 3,000 in the United States.

Chesky told staffers to consult with managers ahead of relocating about expectations, and added that given the complexities of international moves, "we won't be able to support those this year." He also noted "a small number of roles will be required to be in the office or a specific location to perform their core job responsibilities."

The update is perhaps a no-brainer for Airbnb as Chesky has become a living and breathing marketing campaign for remote work in recent months — a trend his company, of course, stands to benefit from following the initial, devastating impact on its business in the earliest months of the pandemic. By December 2020, Airbnb went public. And a year later, the company said its revenue grew 25% in 2021 compared to 2019, or the year before the pandemic hit its business. Airbnb posts its first-quarter earnings on Tuesday.

In January, Chesky announced that he'd live in Airbnbs, staying in other people's homes listed on its platform so he could hop from city to city every few weeks. Chesky said then that he thought the biggest travel trend in 2022 will be "people spreading out to thousands of towns and cities, staying for weeks, months, or even entire seasons at a time."

"More people will start living abroad, others will travel the entire summer, and some will even give up their leases and become digital nomads," he said, calling it a "decentralization of living."

Now, Chesky is officially freeing up staffers to do just that. He encouraged those who want to take advantage of long stays in other countries to do so.

"Starting in September, you can live and work in over 170 countries for up to 90 days a year in each location," he wrote. "Everyone will still need a permanent address for tax and payroll purposes, but we're excited to give you this level of flexibility. Most companies don't do this because of the mountain of complexities with taxes, payroll, and time zone availability, but I hope we can open-source a solution so other companies can offer this flexibility as well."

Chesky added that staffers are responsible for sorting work visas. They should also expect more in-person gatherings next year at a cadence of about "every quarter for about a week at at time." In the United States, the company will largely operate on Pacific Standard Time.

"Flexibility only works when you trust the people on your team," said Chesky. "You've shown how much you can accomplish remotely. In the last two years, we navigated the pandemic, rebuilt the company from the ground up, went public, upgraded our entire service, and reported record earnings, all while working remotely."
Add Comment