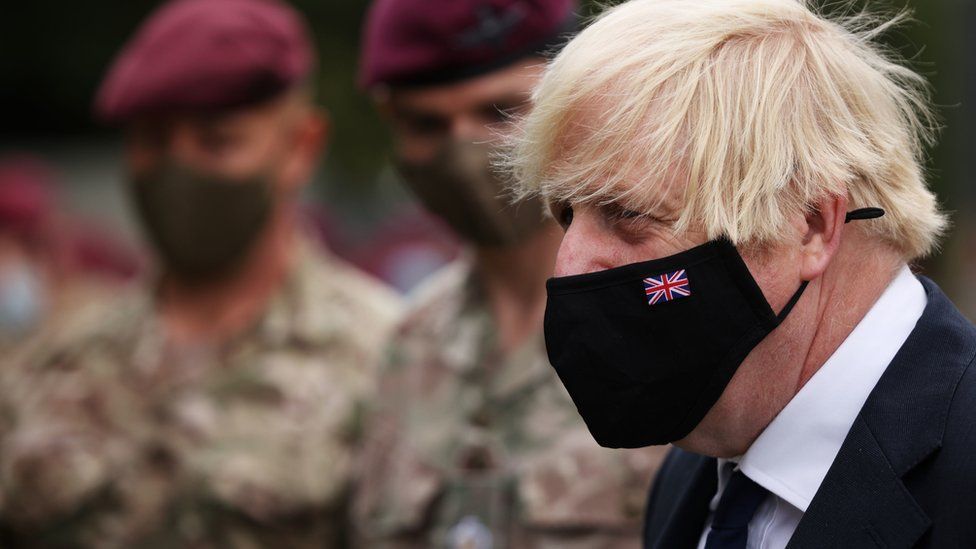 Afghanistan: Boris Johnson to face MPs over handling of crisis

Boris Johnson will defend his handling of the Afghanistan crisis in the Commons as he reiterates his vow to use "every economic, political and diplomatic lever" to help Afghans.

Both he and Foreign Secretary Dominic Raab have faced criticism over the UK's response to the Taliban takeover.

The prime minister will make a statement in the House later on Monday.

It comes after the UK's top general said "everybody got it wrong" on how quickly the Taliban would gain control.

Labour has been among those warning that the UK could face a heightened terror threat if extremism is allowed to flourish in Afghanistan.

The last British and US troops left Afghanistan at the end of August, bringing their 20-year military campaign in the country to an end.

There has been criticism of the way the West withdrew, with questions over how the Taliban was able to seize control of the country at such speed.

And there is also concern that many Afghans who were eligible to come to the UK -many of whom worked with the British armed forces or government - have been left behind.

In a statement to Parliament, which returns on Monday from its summer recess, Mr Johnson will pledge to "use every economic, political and diplomatic lever to protect our country from harm and help the Afghan people".

He has previously said Western governments could withhold substantial funds from the Taliban.

Mr Johnson will also commend the "courage and ingenuity" of those involved in the UK's evacuation of around 15,000 people from the Afghan capital, Kabul.

The prime minister is expected to provide an update on the government's new resettlement programme for Afghans, which will allow a total of 20,000 people to settle in the UK over the coming years.

Mr Johnson will also use his Commons speech to thank the 150,000 British service men and women for their work in Afghanistan over the past two decades.

His statement comes in the week marking the 20th anniversary of the 11 September 2001 terror attacks in New York, Washington and Pennsylvania which prompted the US and its allies to go to war in Afghanistan.

Downing Street said he would announce an additional £5m to help military charities provide support for veterans with the aim of ensuring "no veteran's request for help will go unanswered".

The PM's last appearance in the House of Commons came during an emergency debate on the Afghanistan crisis on 18 August, when he faced a barrage of criticism from MPs on all sides.

On Sunday, Gen Sir Nick Carter, the chief of the defence staff, told the BBC the pace of the Taliban's takeover of Afghanistan "surprised us".

"I don't think what anybody predicted was how fragile that Afghan government was and how fragile it was in relation to the command of its armed forces."

Labour's shadow foreign secretary Lisa Nandy said there was a strong possibility that Britain may now be less safe because of the events in Afghanistan.

"The urgent task for the government... is to make sure Afghanistan doesn't collapse once again into a haven of terrorism," she said.