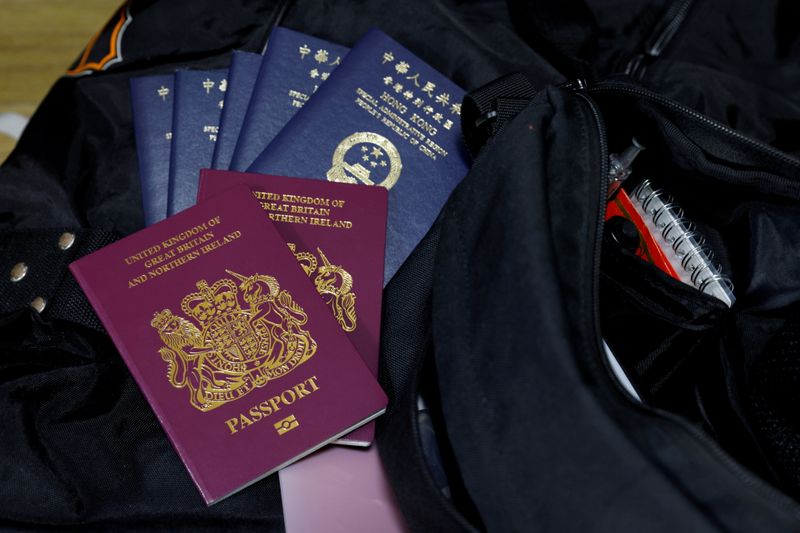 An immigration bill on Hong Kong’s legislative agenda for Wednesday would give authorities virtually unlimited powers to prevent residents and others entering or leaving the former British colony, lawyers, diplomats and rights groups say.

The government says the bill merely aims to screen illegal immigrants at source amid a backlog of asylum applications, and does not affect movement rights.

But lawyers say it empowers authorities to bar anyone, without a court order, from entering or leaving Hong Kong and fails to prevent indefinite detention for refugees.

The government, which has pushed Hong Kong onto an increasingly authoritarian path since Beijing imposed a sweeping national security law in 2020, faces no official opposition after democratic lawmakers resigned en masse last year in protest at the disqualification of colleagues.

Most prominent democratic politicians and activists are either in jail, charged under the security law or for other reasons, or in exile. Western countries, in response, have eased immigration rules for Hong Kongers and granted political asylum to several activists.

Lawyers and rights groups say the immigration bill gives authorities unbridled powers to impose “exit bans” such as those used by mainland China. Beijing denies accusations that the bans are a form of arbitrary detention.

“We have seen the way China has restricted people’s movement in and out of the country, suppressing activists and lawyers,” said Chow Hang-tung, a lawyer who is vice-chairwoman of Hong Kong Alliance, which champions democratic causes.

“They’re saying refugees are a target, but they’re expanding their power across all Hong Kong.”

Authorities in the United States and Europe have long required carriers to provide them with detailed passenger and crew information in advance of travel, under an international convention, and Hong Kong says it is merely following suit.

European Union directives, for instance, state specifically that authorities may not use the data to deny entry for any reason other than “preventing, detecting, investigating and prosecuting terrorist offences or serious crime”.

They also state that any decisions to restrict movement “shall in no circumstances be based on a person’s race or ethnic origin, political opinions, religion or philosophical beliefs, trade union membership, health, sexual life or sexual orientation”.

The Hong Kong Bar Association (HKBA) said in February that Hong Kong’s bill, in contrast, confers “an apparently unfettered power” on the director of immigration “to prevent Hong Kong residents and others from leaving Hong Kong”.

It said the bill offered no explanation of why such a power was necessary or how it would be used, or any limit on the duration of a travel ban, or any safeguards against abuse.

The Security Bureau said the law would be applied only to inbound flights and target illegal immigrants, expressing disappointment at the “unnecessary misunderstanding” caused by HKBA.

In response, HKBA urged the government to clarify the limits of the bill.

But the Bureau last week said that freedom to travel was guaranteed by the city’s mini-constitution, the Basic Law, and its Bill of Rights, and this made it unnecessary to spell out in the bill that those rights would not be affected.

HKBA declined further comment. The Security Bureau referred Reuters to a statement last Friday describing the idea that the bill would deprive residents of travel rights as “complete nonsense”.

It said some organisations “have been attempting to spread rumours in emotional and hostile rhetoric, misleading the public with ill intentions and creating conflict in society”.

Lawyer Senia Ng said concerns about the bill were real and substantial because there was no specific wording to limit its scope.

Asian and Western envoys fear their citizens could be affected. “There is a deepening sense that something longer-term could be at work here and we are watching closely,” said a Western diplomat who declined to be named.

If passed, potentially as soon as Wednesday, the bill could take effect on Aug. 1.

Among the changes, it allows immigration officers to carry guns and, in some cases, requires asylum seekers to communicate in a language other than their mother tongue.

The government says there are currently 13,000 claimants in Hong Kong and that the bill is aimed at tackling the backlog.

The screening process can take years and the success rate for claimants is 1%. During that period, it is illegal for asylum seekers to work or volunteer, and they live in limbo, on food vouchers.

Currently, asylum seekers can be detained only if they break the law or for deportation, and then for a period “that is reasonable in all circumstances”.

The bill removes the phrase “in all circumstances”, which rights groups say allows refugees considered a security risk to be detained indefinitely. The law does not state what constitutes such a risk.

“Even under the existing detention system there are already many unresolved issues, such as allegations of abuse,” said Rachel Li, policy officer at rights group Justice Centre.

“The bill is not in compliance with common law principles and international best practices.”