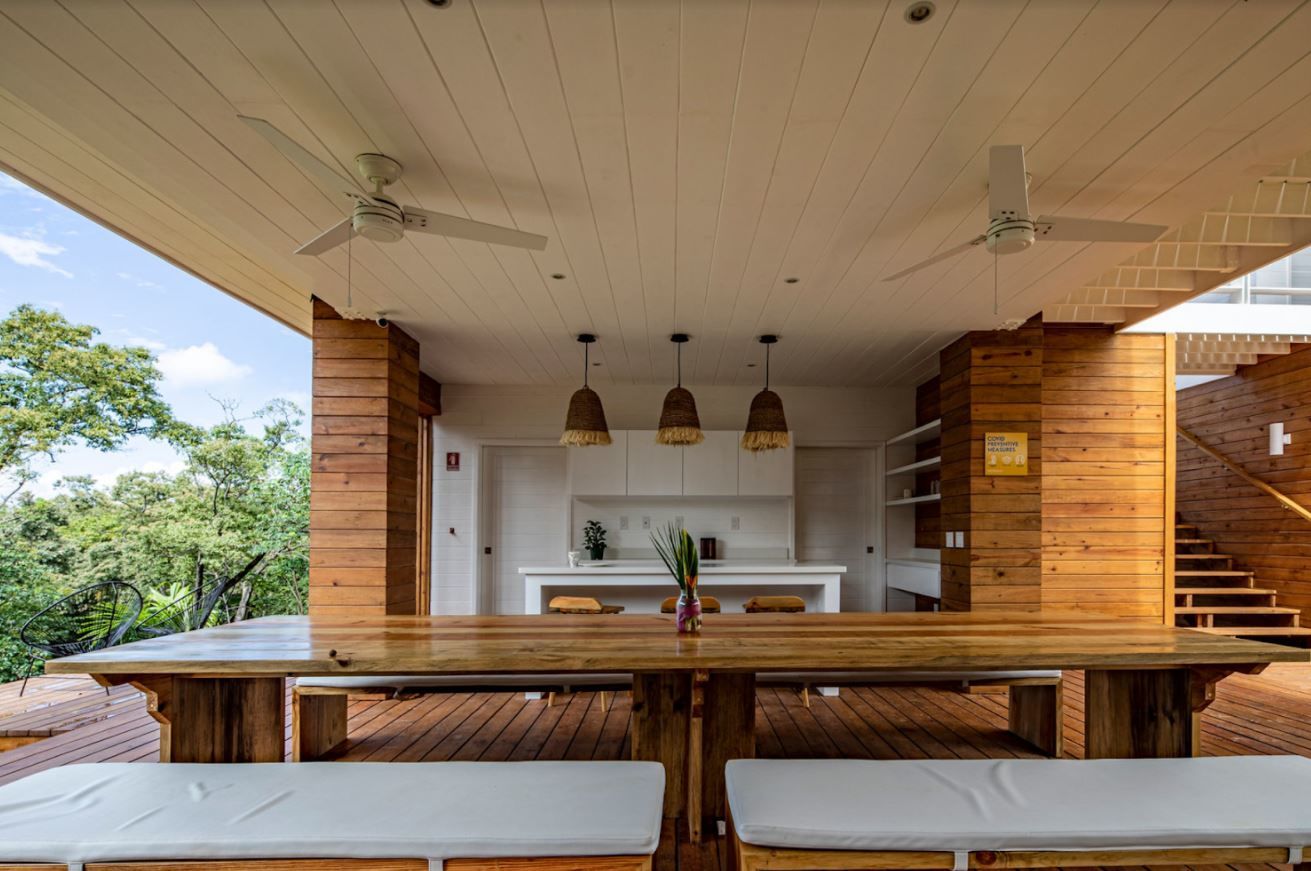 A Private Tech City Opens for Business in Honduras

Prospera, a mini startup nation with its own set of laws, begins recruiting residents amid local controversy.

If you’re going to work remotely, Próspera is a nice place to do it. Located on Roatán, a tropical island off the coast of Honduras, it features a series of airy offices and communal outdoor spaces with ocean views.

There are other real estate developments on the island, but Próspera is the only one with its own set of laws and governing system.

Próspera is the first project to gain approval from Honduras to start a privately governed charter city, under a national program started in 2013.

It has its own constitution of sorts and a 3,500-page legal code with frameworks for political representation and the resolution of legal disputes, as well as minimum wage (higher than Honduras’s) and income taxes (lower in most cases).

After nearly half a decade of development, the settlement will announce next week that it will begin considering applications from potential residents this summer.

The first colonists will be e-residents. Próspera doesn’t yet have housing ready to be occupied. But even after the site is built out, most constituents will never set foot on local soil, says Erick Brimen, its main proprietor.

Instead, Brimen expects about two-thirds of Prósperans to sign up for residency in order to incorporate businesses there or take jobs with local employers while living elsewhere.

For many Central Americans, Brimen says it’ll be an attractive alternative to the meager economic opportunities afforded elsewhere in the region, whose governments he considers to be bureaucratic and corrupt. “You can have the rule of law virtually,” Brimen says.

The idea behind charter cities, along with their predecessor seasteading, which sought to create independent nations floating in the ocean, is to compete for citizens through innovative, business-friendly governing systems.

For some reason, the idea has long been linked to Honduras, an impoverished country whose governing system is classified as “partly free” by the human rights organization Freedom House.

Paul Romer, an American economist who pioneered the idea of charter cities, tried to start one in the country a decade ago. It failed, but Honduras has spent much of the time since then writing a law to enable such cities, which are known in the country as Zedes, short for zonas de empleo y dessarollo económicos (employment and economic development zones).

But the prospect of creating pockets of prosperity that play by their own rules is controversial for obvious reasons. Próspera has drawn protests from local residents who see a lack of transparency and little to gain from its existence, and a group of local political leaders signed a letter of opposition in October.

This month, an arm of the Technical University of Munich said it’s reevaluating its relationship with Próspera and that it generally withdraws from projects if there are indications of human rights violations. Representatives for TUM didn’t respond to requests to elaborate. A spokeswoman for Próspera says it has had a “great working relationship with TUM over the years.”

After years of debate, Próspera will be the first real-world test of a divisive libertarian idea, says Beth Geglia, an anthropologist who studies charter cities. “There was a noticeable lull in the startup city movement in general until the Próspera Zede project got off the ground,” she says. “It’s ground zero.”

A 37-year old Venezuela native and U.S. citizen, Brimen presents himself as only mildly ideological. “It’s not, ‘Screw the state,’ or, ‘Let’s be libertarians,’” he says. “It’s somewhere in the middle.”

He first got interested in private cities as a student at Babson College in an affluent suburb of Boston and came back to the idea after working in finance and starting several companies focused on entrepreneurship in Latin America.

Brimen began looking to acquire land in Honduras in 2016. He spent the next several years writing Próspera’s charter and recruiting business partners.

One investor is Pronomos, an investment fund for charter cities backed by conservative billionaire Peter Thiel and run by Patri Friedman, the grandson of the late influential free-market economist Milton Friedman. The younger Friedman didn’t respond to a request for comment. Brimen says Pronomos holds a small stake.

What to know in techGet insights from reporters around the world in the Fully Charged newsletter.

The idea behind Próspera as Brimen describes it is basically wage arbitrage. Honduran professionals can perform jobs for U.S. companies at far lower rates than their American counterparts, and Próspera can provide a jurisdiction that will give both workers and employers access to a more liberal and effective legal system, Brimen says.

Próspera also fashions itself as an advantageous place to incorporate new businesses, a kind of tropical Delaware where paperwork moves quickly and no one asks for a bribe.

About 100 people are already working at the Próspera site. Future residents may choose to move into the development on Roatán or, eventually, to other Próspera locations.

Sensitive to the idea that he’s creating a playground for rich foreigners, Brimen recently took a reporter on a Zoom tour of the development, pointing out that the paintings and furniture in the conference rooms were made by local artisans.

At one point, he stopped to greet a group of attractive young professional types sitting around a picnic table. “How many of you are from Honduras?” he asks. Everyone’s hand goes up.

People who want to do business through Próspera must submit to a background check, as well as a review of whether they’ll be able to pay relevant taxes and their expected impact on Próspera’s “reputation and social harmony.”

E-residents can then apply for rights to access Próspera itself through a day pass or longer-term arrangement.

“We can build E-Próspera to have as many users as would possibly be interested,” says Vatter, who works from his home in Estonia but sets his background to a photo of Roatán during video calls. “The scalability is infinite.”

Venessa Cardenas Woods first met Brimen about three years ago, when she volunteered her house in Roatán as the site for one of his first meetings with locals.

She’s a schoolteacher in Crawfish Rock, the village where Próspera is located, and part of the local patronato, an elected community board. She says she came away from the meeting thinking it would be a fairly standard tourist destination.

It wasn’t until later that she learned about its broader ambitions under Zede law. “We’ve had many investors who came to this island, who built under normal municipal law,” she says. “They didn’t build their own state.”

The appropriation of land is a sensitive topic in Honduras, and many residents don’t trust the government to protect their property.

President Juan Orlando Hernandez has been implicated in several drug trafficking cases in the U.S., and the legitimacy of his 2017 election has been widely questioned. Hernandez’s government didn’t reply to an interview request.

Brimen insists he has no plans to take land from neighbors and says he doesn’t have the legal right to do so. “No one will ever, ever be able to say that because of anything we’ve done, they’re worse off,” he says. “We haven’t taken land, we don’t pollute, none of that.”

Mark Lutter, who runs a research and advocacy group for charter city projects, is supportive of Próspera but says its focus on professional work may be a mismatch for the area, which would benefit more from manufacturing jobs. He also says the application process for residents uses needlessly provocative language.

As a government, Próspera is “experimenting with extremely limited and flawed representative democracy,” says Geglia, the anthropologist.

She points to a rule through which landowners hold more voting power than other residents until the development matures.

A spokeswoman for Próspera says the concerns are unfounded because the development will consist almost entirely of landowners as it is being established and that its charter is designed to enable the kind of representative governments that developed countries have today.

But its neighbors in Honduras see flaws, too. Cardenas Woods says not enough Crawfish Rock residents were employed in construction or facilities jobs at Próspera and doubts the project will benefit her community in the long-term.

But she’s also resigned to Próspera’s existence and says Brimen is just taking advantage of an opportunity with which Honduras officials presented him. “We’re going to focus more on the law than the project itself,” she says. “Our fight is with our own government.”
Add Comment