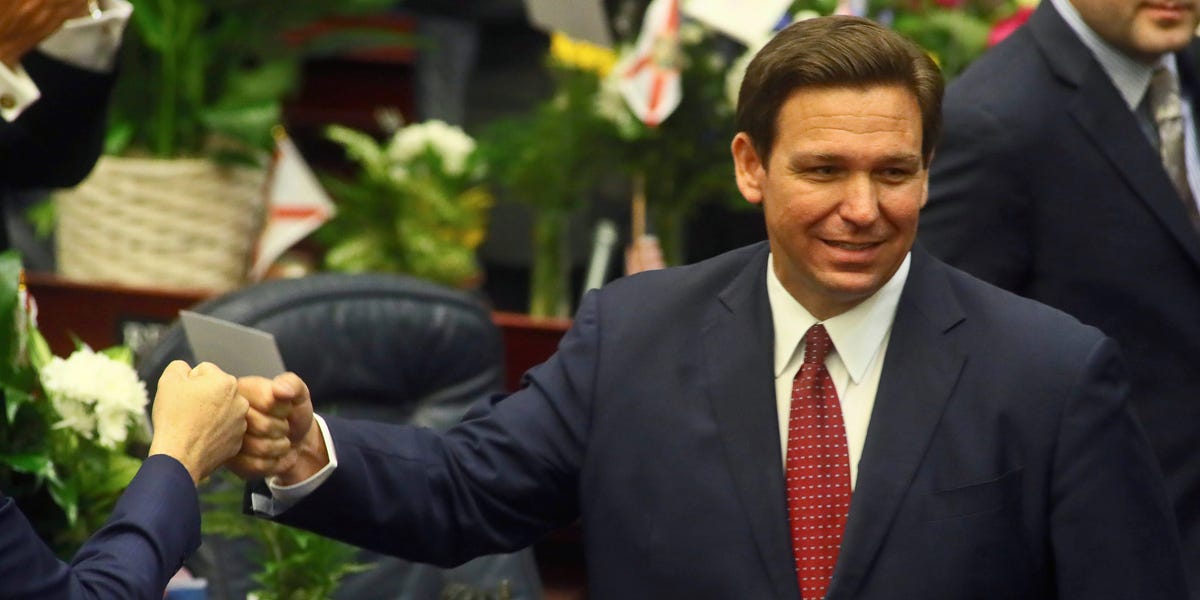 'A nicer version of Trump': Ron DeSantis is sized up by GOP donors ahead of potential 2024 presidential bid

DeSantis, who was a congressman before narrowly winning the 2018 Florida gubernatorial race, has quickly become a visible national GOP figure.

Former President Donald Trump continues to hold an iron grip over the Republican Party from his Mar-a-Lago resort in Florida, making critical endorsements in 2022 races and continuing to flirt a presidential run in 2024.

However, if Trump declines to run for office again, GOP Gov. Ron DeSantis of Florida is currently well-positioned to occupy a conservative space within the party that could catapult him to the 2024 presidential nomination.

During an event in South Carolina this past February brought together by the Bradley Foundation and filled with conservative donors, DeSantis, who was in attendance, spoke for almost an hour about his approach to governance, according to Politico.

In the speech, DeSantis detailed his opposition to widespread lockdowns in the Sunshine State.

Last month, in response to President Joe Biden signaling the possibility of additional coronavirus restrictions if people weren't "vigilant," DeSantis said that any sort of lockdown in his state would be "insane."

"That's not gonna happen in the state of Florida," he said at the time. "We're gonna continue doing what works, but under no circumstances would we entertain anything of the sort."

Such talk has made DeSantis a darling of conservative circles as many donors take a wait-and-see approach to Trump's eventual 2024 plans.

Conservative benefactor Art Pope, who chairs the foundation, is a strong backer of former Vice President Mike Pence, who also spoke at the conference, but thinks highly of DeSantis.

"He's in the top tier, should he choose to run for president," Pope told Politico.

The governor is up for reelection in 2022 and major donors from across the country are committing to help his campaign, according to Politico.

In a series of interviews, roughly two dozen top GOP fundraisers told Politico that the 2024 presidential spotlight is increasingly focused on DeSantis.

Don Tapia, who served as the ambassador to Jamaica under Trump from September 2019 to January 2021, praised the "independent style" of DeSantis and said that the governor "has a major political future in the Republican Party."

Tapia, who said that DeSantis "is strong candidate I would truly look at" as the 2024 presidential nominee, is slated to host a fundraiser for the governor in Arizona, according to Politico.

During the Republican National Committee's donor gala in Florida last week, DeSantis was lauded as he declared that the GOP needed leaders who could battle the "elite, New York corporate media."

Joanne Zervos, a Republican donor from New York, told Politico that many GOP contributors view DeSantis as "a nicer version of Trump," possessing a bluntness similar to the former president but with less of a "rough" demeanor.

While the early attention can't hurt DeSantis, the governor must still contend with his reelection race next year, where he'll face a potentially bruising challenge from Democratic state Agriculture Commissioner Nikki Fried.

DeSantis would also have to compete in the same donor universe as many potential 2024 GOP contenders, including home state Sens. Marco Rubio and Rick Scott.

However, as the orbit of the GOP becomes increasingly drawn to Florida, the governor has the potential to attract a lion's share of the donors.

Politico reported that financial lenders have been pleased with DeSantis' refusal to shut down businesses for extended periods of time.

Venture capitalist David Blumberg, who moved from San Francisco to the Miami Beach area late last year, donated over $100,000 to Trump's 2020 campaign and has met with DeSantis several times since moving to the state.