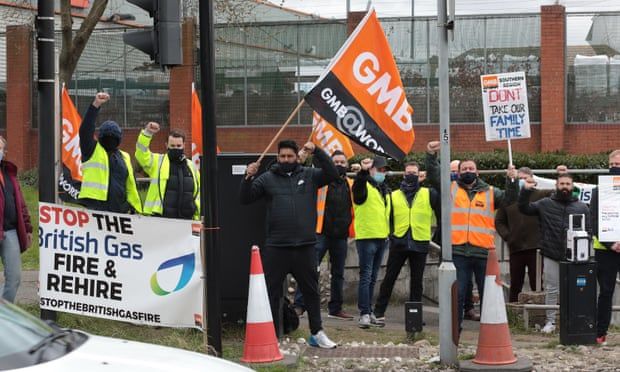 ‘A kick in the teeth’: British Gas engineers face losing their jobs or longer working hours

Hundreds of engineers could be dismissed from the country’s biggest energy supplier by the end of the week as a bitter nine-month battle in the UK’s latest “fire and rehire” debacle reaches its climax.

The standoff between British Gas executives and trade union representatives at GMB will come to a head on 1 April, when scores of the engineers responsible for servicing and repairing office and home boilers will be forced to accept longer working hours or lose their jobs entirely.

“For the last nine months it has been the first thing I think about when I wake up, and the last thing I think about when I go to sleep. The pressure we’re under is terrible,” says one veteran British Gas engineer. Chris, 51, has worked for the company since 1987 but asked not to be named in full because he may be forced to accept the new terms and remain at the company to support his family.

“Honestly, it’s made me ill. It’s made everybody ill. We just can’t understand how badly we’ve been treated – why?”

The tougher terms affect the entire 20,000 strong British Gas workforce, but its 7,500 service engineers – who carry out repairs for 3.6m customers who use British Gas for servicing their machines – fear they will take a disproportionate toll on their lives and livelihoods. British Gas claims that the percentage which have accepted the changes are in “the high 90s” – leaving up to 1,000 to face a stark choice in the days ahead.

“A kick in the teeth is probably the best way to put it,” says Ciara Arrowsmith, 37, who resigned from British Gas in protest last month after 13 years as a service and repair engineer in Sunderland. “I was always very loyal to the company, but I felt that what they were doing was immoral,” she says.

British Gas set out the fire and rehire plans last summer as part of a formal consultation process with trade unions. The company said it hoped to “streamline” its employment contracts, and increase productivity, to help rescue the business from the risk of financial ruin. Trade unions said the plan amounted to “bullying” by threatening to “set fire to jobs, terms and conditions”.

“It just became a really toxic atmosphere. I felt completely betrayed and it wasn’t good for my mental health. I had to go on to medication, but now I’m off,” says Arrowsmith. “It was just the uncertainty of what it was going to mean for the future because I’ve got two young children. There are loads of people with young kids, with carer responsibilities. This strike was not about money, it was about time.”

Under the new terms, full-time engineers would be required to work an extra three hours a week, 40 hours in total, and would not be paid a higher rate to work when required on weekends and public holidays.

“It’s a sad state of affairs,” says another British Gas engineer, wary of using his full name. Paul, 45, has worked for British Gas in the London area since the early 1990s. He reluctantly accepted the company’s new terms last week (“two kids, big mortgage”) but has continued to picket with union members to protest the company’s heavy handed threats.

“Most engineers have been with the company for a minimum of 10 years, going up to 40 years. We all have British Gas ingrained in us. If you cut us in half, you can read British Gas right the way through,” he says.

Before the dispute erupted, many engineers had continued to fix home boilers and heating systems through the first wave of the pandemic, in full PPE, and had half-thought the company might “give us a pat on the back for that, that we might get a bonus”, says Paul. “Then you find out that behind the scenes they have been plotting to effectively rip up our contracts.”

He blames the company for allowing inefficiency to creep in, and expecting frontline engineers to bear the brunt of the decade-long commercial decline, which has sunk profits to record lows.

“This is certainly not a position anyone wants to be in,” says Chris O’Shea, chief executive of Centrica, parent company of British Gas. “How did we get here? Our business has been declining for a number of years. We’ve lost a million customers in the last 10 years. Our productivity has declined substantially.”

The group’s full-year earnings tumbled by more than a third to an all-time low of £80m last year, a fraction of the supplier’s record-high annual profits of £742m reported 10 years ago, before a steady decline which toppled its parent company from the FTSE 100.

The decline of British Gas, once a jewel in the crown of Margaret Thatcher’s privatisation agenda, has accelerated as an army of nimble energy supply start-ups increased their market share by offering rock-bottom deals. Meanwhile British Gas boiler repairs and servicing have been eroded by a fleet of local “white van” engineers and repair experts, who can also afford to undercut British Gas rates.

“Our costs are between one-third and one-half higher than the person with a white van, and that is an unsustainable position,” says O’Shea. “Without change we would continue to decline. So I took the decision to engage with all four of our trade unions – Unite, Unison, Prospect and GMB – to discuss this and seek a negotiated settlement. And we managed to achieve one with all but the GMB. It’s deeply regrettable. But it’s about the long-term sustainability of our business,” he says.

“We’ve tried as hard as we can to be fair. The vast majority are with us. There’s still time for everyone to join us too. But everyone’s got their own choice, and I feel strongly that everyone has to make the right decision for them and their families,” O’Shea says.

For workers at British Gas, faced with a choice between working for less and unemployment, there are less than three days left to decide.
Add Comment